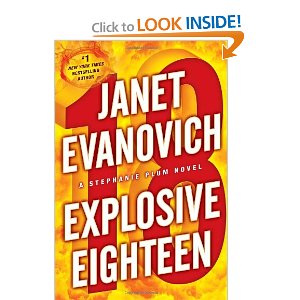 Explosive Eighteen by Janet Evanovich
2011, Bantam Books
Why?  I've read all the Stephanie Plum series and have eagerly awaited 18's publication since I closed the pages of 17
What Now? Glad I didn't purchase a hardback of this one :(  After I write my review I'm anxious to see what other Evanovich fans have to say about this
Golden Lines:
"Did you report the found driver's license to the police?"
"Yes. I told Morelli."
"Then I'm sure he's there with a cadaver dog.  He's an idiot, but he's a good cop."
"Why is he an idiot?"
"He lets me get close to you."
Lula swung through the coffee shop door and came over to us.  "Is that a gun?"
"Oh for Crissake, who's this?" Brenda asked.
"I'm Lula.  Who the heck are you?"
"This is a private conversation," Brenda said.
"Yeah, but I want to take a look at your little peashooter.  It's kinda cute."
"It's a gun," Brenda said.
Lula pulled her Glock out of her bag and aimed it at Brenda.  "Bitch, this is a gun.  It could put a hole in you big enough to drive a truck through."
"Honestly," Brenda said, "this is just so boring."  And she huffed off to her car and drove away.
"She was kinda snippy, being I just wanted to see her gun," Lula said.
Summary
Returning from a ruined trip to Hawaii, Stephanie finds herself in the middle of a crime mess...just from sitting by the wrong person on the airplane.  The man sitting on the airplane accidentally slips a photo into her messenger bag that a lot of people want...and want bad enough to hunt Stephanie down.  Stephanie is trailed by fake FBI men, real FBI men, the hairdresser sister of a mobster and a foreign killer.  She's dodging dangerous people at every move.  At the same time, Stephanie's dodging (unsuccessfully) both Ranger and Morelli after the events in Hawaii and doesn't seem any closer to making a choice.
What I Liked
Stephanie and Lula - I definitely giggled out loud at more than one place...these two are nuts.
I can't think of anything else. :(
What I Didn't Like
Why the heck did Lula keep saying WHAM?  There were more than enough Food Network mentions so I'm assuming Lula's new saying is a spin-off from Emeril Lagasse?
Stephanie's trip to Hawaii was a major cliffhanger at the end of Book 17.  In Explosive Eighteen it was glossed over like it was nothing.  The one paragraph that finally explained what happened on the trip when Stephanie explained to her mother, Lula and Grandma Mazur could have been developed into the storyline that occurred before this one.  Unless Evanovich is dragging it all out even more, I honestly have no idea what she's thinking by not hashing this out.
***SPOILER ALERT***
I am no prude, but in all the other books, Stephanie is either with Morrelli or Ranger...not both...and she's usually committed to one of them, not neither of them.  This was a major change of events for Evanovich, and I just can't imagine where she's headed with it.

Evanovich also suggest twice in different places that Stephanie might have been lax in her family planning while in Hawaii.  What is that all about??  You've got to be kidding me???  If Evanovich does that, I'm done.  For a LOT of reasons.
***SPOILER OVER***
The minor character names in this book were the worst...Razzle Dazzle, Tootie Raguzzi, Lancer Lancelot, Buggy, Magpie, Sly Slasher, Lahonka, ...??? Huh??
Even the bad guys were jokes this time...the scariest character was Razzle Dazzle...and no, that's not a typo.  How can someone be scary with a name like Razzle Dazzle??  Even more important, how can someone be scary when he talks like this"
"You will be stopping moving," he said. "You are understanding?"
Oy.
All of a sudden, Stephanie is a martial arts expert??  I know she works well with rage, but she's so tough now that even the cops are amazed at her actions on surveillance video??  Huh?
Morelli's interactions with Stephanie after Evanovich's Hawaii explanation are not consistent with his traditional expectations of Stephanie and of where their relationship is or is not going.
Ranger - I've always been a Morrelli girl, and I have never disliked Ranger, but at this point, I'm beginning to.  If he cares so much for Stephanie, knows he's not interested in a "relationship" and knows Stephanie would be safer, happier with Morrelli, then why doesn't Ranger just step back.  In this book it almost seems like Ranger's using Stephanie.  For example, what happens in a closet where Stephanie and Ranger are hiding is unnecessary.  I had to re-read that page just to make sure it really happened...and still wasn't sure until a few pages later when Stephanie mentions the event and left no doubt in my mind.  Unless, of course, something else happened in Hawaii to make Ranger think he and Stephanie are together??   Unfortunately, I guess we'll never know.
Grrrrrr!


Overall Recommendation:
At first I thought only die hard Stephanie fans would like this, but I'm wondering if only those who haven't read any of the other books would really be the ones to read this?  And, I'm not even sure they would see the series for the wild ride it has been until now.  This is the worst Stephanie Plum yet; I'm so disappointed.  And, I'm not even sorry about giving it a negative review.
I'm sad.
- December 30, 2011
Email ThisBlogThis!Share to TwitterShare to FacebookShare to Pinterest
Labels: Books