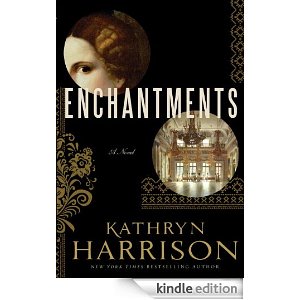 Format? Ebook on my Kindle

Source? Net Galley - The publisher sent me a complimentary copy of Enchantments for review but the opinions expressed below are completely my own without bias.

Why?  I've been enthralled with the Anastasia legend for as long as I can remember...honestly, that's really all I knew about this portion of history, the Russian revolution, and the Romanov family.  I'm embarrassed to admit that...but it's true.  It's not like me to be satisfied with the "Santa Claus" version of any history, so when I saw Enchantments on other blogs and realized what it was about, I knew it was past time to fill in my gaps.

What now?  Even while I was finishing the book, I started googling...Rasputin, Maria Rasputin, the Romanov family, Alexai Romanov, the Russian revolution, etc.  You name it; I wanted to see it...mostly I was trying to piece together which parts of the novel were factual and which were fiction.   I was surprised to find out how much was fact...the Romanovs are one of the most documented royal families because of their love of photography and journaling.  I've already ordered Nicholas and Alexandra by Robert K Massie to build my foundation even more.  I can see myself having a shelf full of Romanov literature right next to my Tudor literature very soon :)

For the rest of that terrible winter, the last of the Romanovs' rule, St. Petersburg shuddered under one riot after another, and her citizens' blood remained on the ice under the Petrovsky Bridge.

It wasn't fair to blame Alyosha, and I didn't.  Still, I had to push the thought away: if it weren't for his everlasting illness, my father would never have been murdered.

Tsar Nikolay didn't talk politics.  He had four uncles filled with opinions and would have been, by everyone's account, happy to hand them the empire.

Only those who lived at Tsarskoe Selo, within the walls of the Romanovs' carefully guarded privacy, could understand how suffocating was the pall of dread that descended in the wake of one of Alyosha's injuries.

I knew I couldn't help him as my father had done, couldn't whisper to the clamoring blood and stop its flow.  Couldn't lay a hand on an injury and make it disappear.  But I could tell stories, and they were, most of them, true.

The tsarevich understood the destiny he meant to fulfill, but the official history of Russia didn't include the lives of the tsar's subjects, and Alyosha had never been told the real story of his birthplace.

Within a year they'd all be dead, all except one of the dogs, the one named Joy, of all things.

Here in the "House of Special Purpose," no one escapes humiliation.

Told from the perspective of Grigory Yefimovich Rasputin's daughter Masha (Maria in real life), Enchantments is the story of her father Rasputin, his murder and the undoing of the Romanov family, including Masha's close relationship with the tsar's only son Aloysha (Alexai in real life).
After Rasputin's murder, Masha and her sister go to live at Tsarskoe Selo with the Romanovs in hopes that Masha has inherited at least some semblance of her father's healing powers.  Aloysha is a hemophiliac and has grown to depend on Rasputin to overcome his many illnesses, including tremendous pain and suffering throughout his young life.  Masha takes her father's place, telling Aloysha stories that she heard from her father, about his life, the life of Aloysha and his parents and the history of their families, spun creatively into cultural stories with fantastic elements and details as well as fact.

The details - while the details were sometimes hard to read (the assassination, Rasputin's murder, burial, and unburial, Aloysha's bleeding, etc.) they made the story real.  I think that's important for a story like this one where a lot of people think they know the story...when they really don't.

Another side to Rasputin - I always believed that he was an evil charlatan who was in some way responsible for the deaths of the Romanovs.  In short, I accepted the "legend" of Rasputin without question, something I teach my students not to do :( Through Harrison's story I now see that there is another side (as there always is)...to this tragedy.  We may never know the exact truth behind Rasputin's relationship with the Romanovs, but it certainly wasn't the clear cut version we've grown to believe.  The facts lead me to believe that he was certainly a man who suffered from some kind of mental illness (maybe schizophrenia?) but he was incredibly intelligent at the same time...there usually is a fine line.  I will definitely be reading more about this character.

A new vision of "monarchy" - we tend to put the monarchy up above the rest of the world...when they are just families...unfortunately, though they are families with greater expectations than the rest of us will ever know...with a country as their child.
I realized this when the tsar's supporters reached out to his other family members across the world for political asylum and no one came to their aid for fear of consequences within their own realms.  Very sad indeed.

The facts - there is enough mixture of fact and fantasy to stir my curiosity to the point of literary/historical obsession as usual...I "need" to find out more.  I "need" to tease out what we know from speculation.   I also am intrigued by what we don't know and how as time goes on, we are still learning and putting the pieces of the historical puzzle together.

The treatment of the Romanovs while under arrest - I realize this was a revolution, and I realize that the Romanovs were considered prisoners of war...BUT they were a FAMILY...4 young women and a young boy, their mother and father, including some of their most trusted aids.  The soldiers who murdered the Romanovs kept detailed records of how they killed the Romanovs...how does a human being walk up to an injured 13 year old boy, put his pistol on the side of his face and shoot twice to finish him off.
I know this sounds naive of me, but I just don't understand.

The more I learn about the monarchy...no matter which country...the Cinderella story is a lie.  The Romanovs looked for places to go...for political asylum...but even their relatives in England, Germany, and other European countries wouldn't/couldn't take them in, probably more for political reasons than anything...as a monarch, the fate of your country and the safety of your subjects is always on your shoulders.  If one family must be sacrificed for the whole country, then so be it.
Nope, no thanks, not me.

The yarns and legends woven into the stories - I think if I had more of a background in Russian literature/history/storytelling, I might have appreciated and understood these more.  As the story moved on, I sometimes found myself skimming through some of the more colorful stories Masha told Aloysha (flying carpets and such).

The Romanovs were doomed from the beginning...every choice they made seemed to be misconstrued...For example, after their son, the heir to the Russian monarchy (the savior of Russia) was born a hemophiliac, they moved away from the public eye to protect him and keep his sickness as much a secret as possible.  A move made to protect their son was falsely interpreted as conceited, and after living away from the city so long, they missed many of the early warning signs of turmoil that might have saved them.  As much as I liked this novel, by halfway through I found myself wanting it to be over.  I almost think I felt the symbolic cloud (which must have been some form of depression?) that followed Alexandra around.  I was trying to explain this to my oldest daughter and she said, "It's sounds like how you feel when you're reading Anne Frank."  Yep, exactly.

The "romance" between Alyosha and Masha.  I don't know if I'd call this a romance or Alyosha trying to lose his virginity.  I'm anxious to find out where this part of the story came from.

As one who only knew the fairy tale version of this story up to this point, I'm assuming that this is a story for those, like me, who aren't already steeped in Russian history. You certainly need to be a lover of historical fiction for this one as well.