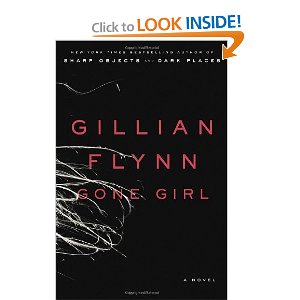 Format? Ebook on my Nook

Why? Are you kidding me??  Have you seen all the reviews in Bloggieland??  I also had a Barnes&Noble gift card; how could I pass this up?

The Title? Amy's parents wrote a series of books called Amazing Amy and the title is a play on words about the different kinds of girl Amy was through all her adventures.

The Cover?  Amy's blonde blonde hair against a black backdrop...

What Now?  Gone Girl isn't a re-readable kind of book (not for me anyway)...part of its lure is the unknown that keeps sneaking up on you as you read...so I would be passing it along if it wasn't forever in the bowels of my Nook :/

Golden Lines
**For the first time in a while, I didn't mark any Golden Lines as I was reading...I had to find these after the fact.  I'm not sure what that means yet...even though the dissertation brain disease is trying to analyze the crap out of it :/
Part of Gone Girl's pull is the unknown, so I purposely picked Golden Lines that would tease.

There's something disturbing about recalling a warm memory and feeling utterly cold.

The street is billowing, and Nick pulls me close and smiles that smile again, and he takes a single lock of my hair between two fingers and runs them all the way to the end, tugging twice, like he's ringing a bell.

I felt giddy, felt for a moment we were all pretend people: Let's play the Missing Wife game!

"She's a planner - she doesn't, you know, wing anything.  She likes to make lists and check things off.  Get things done.  That's why this doesn't make sense - "

I opened it gingerly as if a head might be inside.  I found only a creamy blue envelope marked
FIRST CLUE.

In my pocket, my disposable cell phone made a mini-jackpot sound that meant I had a text:
im outside open the door

I'm so much happier now that I'm dead.

Nick must be taught a lesson.  He's never been taught a lesson!  He glides through life with that charming Nicky grin, his beloved child entitlement, his fibs and shirkings, his short-comings and selfishness, and no one calls him on anything.

Something bad was about to happen.  My wife was being clever again.

"Just like your dad.  We're all bitches in the end, aren't we, Nick? Dumb bitch, psycho bitch."

Go burst into tears then - the first time I'd seen her cry since she was a child.  She sat down on the floor, straight down, as if her legs gave out.  I sat down beside her and leaned my head against hers.  She finally swallowed her last sob and looked at me.  "Remember when I said, Nick, I said I'd still love you if?  I'd love  you no matter what came after the if?"
"Yes."
"Well, I still love you.  But this breaks my heart."  She let out an awful sob, a child's sob.  "Things weren't supposed to turn out this way."

Humor - If I wasn't breathing heavily to recover from shock or sucking in air over the most recent language bomb, I was laughing.

Shock Value - I have no idea how many times Flynn smacked me in the head. Literally...smacked. me. in. the. head...I don't remember being this surprised by the events of story in a very long time.

The Pull - the only thing I know to compare it watching Shark Wek...you know there will be sharp teeth, chills, biting, blood and fish guts...and even though most, if not all, SharkWeek fans would never ever want to see any of the shark action in real life, we can't take our eyes off the screen.

The format - days gone...the alternating point of view between Nick and Amy for the same timeframes after she goes missing  may very possibly be genius.  It adds that "oooh, I can't believe she said that...now let's see what he'll come up with in response to the same scenario" feel to Nick and Amy's story...also how Flynn delivers some of her punch...different people remember events in their own creative ways sometimes.

Go (Margo) - Nick's twin sister - seriously, the only character in this story that I actually liked...the only one with any sense...funny and a mouth like a sailor

Betsy Bolt - Tanner's wife...the way she hit Nick in the face with jellybeans - Betsy made me snort!

Amy, Nick, Rand and Marybeth (Amy's parents), Boney and Gilpin (the two cops in charge of the investigation), Tanner, and pretty much anybody else in Flynn's novel.
Good luck trying to find a character in Gone Girl that you actually like...and let me know how that works out for you.

When I finished Gone Girl, my first reaction was anger...truly...
First of all, my Nook said we had about 25 more pages to go, so I kept thinking something else would happen...but then I swished to the next page and found out it was the last page followed by 25 (pages) in Acknowledgements and excerpts from Flynn's other novels.
Rarrrrrrrrrrrrrr!
But, still, I honestly don't know if I've ever finished a novel with so much negative emotion...but not for the book itself, the author, etc.
I don't really even know yet how to wrap my mind around it.

**I started this review a couple of months ago.  In response to a very dear friend who asked me last night what I thought of the book, I decided it was time to finish this review...I still don't know how to wrap my mind completely around this book...I really don't.

Read it if you want your chain yanked...and are not afraid of some pretty seriously crude language used by both main characters.  A few times, the language felt like being punched in the face...just not the kind of stuff I hear everyday...and I teach on a college campus.  In the Acknowlegements, Flynn warns her own kid away from reading Gone Girl until he's 24...I think maybe 30 is better.  Flynn obviously uses the language for emotional zing/shock factor and oh, it worked.