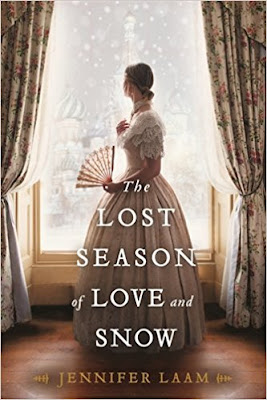 FTC Disclaimer: I received a copy of The Lost Season of Love and Snow from the publisher via Historical Fiction Virtual Book Tours in exchange for an honest review.  The review below and the opinions therein are my own and offered without bias.

It's no secret that I love historical fiction. Always have and probably always will.  I've read a few books about the Tsars, Catherine the Great, and Anastasia. I had never heard of the Pushkins before this book.

Honestly...when the book first arrived, I was a little disappointed in the cover.  It felt sweet and romantic to me, and I'm not usually that kind of reader.
As I began to read, once Natalya meets Alexander, I was even more worried that I would not like the book bc of the swoon factor.
About the time the couple began to settle into married life and began having a family, I couldn't put the book down.

Natalya was 16 when she met famous Russian poet, Alexander Pushkin.  The beauty of her family, she was expected to carry the weight of the family's survival on her shoulders.  She needed to marry well...essentially whatever it took.
She fell in love with Alexander and he with her...so their futures were blinded somewhat to the early warning signs in their relationship including Natalya's need for some semblance of self beyond her beauty and Alexander's jealousness.
It's no spoiler how the story ends.
Alexander is killed in a duel defending Natalya's honor, and a country blames Pushkin's flirtatious wife for the downfall of more than one man.

Natalya herself...after Googling some, I decided I agree with the author...Natalya was misunderstood...while beautiful and flirtatious, she was trying her best to live in a world that she perhaps was too independent for...a mind of her own, and it seemed she tried her best to do what was expected of her while also keep her creative husband creating...while also enjoying her own life.
The reality of any creative relationship is that someone has to bring in an income.  And someone has to keep the outsiders happy while waiting for the creative to create.  And have babies, and keep servants, and dress nicely, and balance the household budgets, and smile just enough for the tsar while also keeping him at arm's length, etc, etc.
The world they lived in had expectations, for Natalya, even more than the expectations for any other woman in her situation since she had to act in her father's stead where her sisters were concerned, and somehow she and Alexander had to meet those expectations.  Theirs really was an almost impossible situation.

I felt Natalya's story affected me somewhat like the story of Queen Katherine Parr.  Both women were strong enough to live life within the confines of society but also still maneuvering more comfortable places within that stifling society.  Neither disappeared when the men they were married to died either. Both married others and went on with their lives.
I'll take that kind of history over swooning any day.

Swooning never impresses me...I got tired of Alexander's whining.  However, I feel after reading some of the author's writing about the book, that her intention was just that.  Not only to show the feminist version of Natalya but to show a feminist version of society's expectations for men as well...men who may not live up to those expectations specifically.

The fact that tsars, emperors, kings, rulers of any kind were able to take a woman, any woman he saw fit (married or not) and make her his makes my blood boil.

I enjoyed the book and am glad I didn't let my first impressions push me away from it.  I'd still like to know more about Natalya.

Jennifer Laam is the author of The Secret Daughter of the Tsar, The Tsarina’s Legacy, and The Lost Season of Love and Snow, all from St. Martin’s Griffin. She is represented by Erin Harris at Folio Literary Management. Jennifer has lived in Los Angeles and the suburbs of Detroit, and currently resides in California’s Central Valley. When she is not busy writing or reading, Jennifer spends her time obsessing over cosplay, trying new vegetarian recipes, line dancing, and spoiling cats. She works for her alma mater, University of the Pacific.
For more information, please visit Jennifer Laam’s website.

During the Blog Tour we will be giving away 2 paperback copies of The Lost Season of Love and Snow! To enter, please enter via the Gleam form below.
Giveaway Rules
– Giveaway ends at 11:59pm EST on January 18th. You must be 18 or older to enter.
– Giveaway is open to US only.
– Only one entry per household.
– All giveaway entrants agree to be honest and not cheat the systems; any suspect of fraud is decided upon by blog/site owner and the sponsor, and entrants may be disqualified at our discretion.
– Winner has 48 hours to claim prize or new winner is chosen.