A Hangman for Ghosts by Andrei Baltakmens - HFVBT Review - Jan. 22 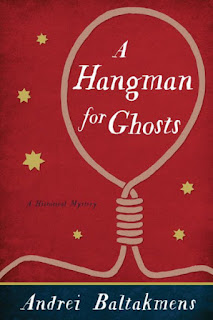 A HANGMAN FOR GHOSTS BY ANDREI BALTAKMENS


Genre: Historical Mystery
The Publisher's Summary
“We are transported. We are consigned to the ends of the Earth. And we are therefore as good as dead to the realm and its judges. There can be no hope of reprieve…”
Gabriel Carver, the convict hangman of Sydney Prison, knows that none of his kind may depart Australia’s penal colony without the system’s leave. Then three people are murdered, seemingly to protect the “Rats’ Line,” an illicit path to freedom that exists only in the fevered imaginations of transported felons. But why kill to protect something that doesn’t exist?
When an innocent woman from Carver’s past is charged with one of the murders and faces execution at his hands, she threatens to reveal anincriminating secret of his own unless he helps her. So Carver must try to unmask the killer among the convicts, soldiers, sailors, and fallen women roaming 1829 Sydney. If he can find the murderer, he may discover who is defying the system under its very nose. His search will take him back to the scene of his ruin—to London and a past he can never remake nor ever escape, not even at the edge of the world.
“Baltakmens (The Raven’s Seal, 2012), echoing the voices of 19th-century masters like Conrad and Melville, combines adventure and mystery in a high-stakes tale of class, morality, and justice.” –Kirkus Reviews
“With rich historical details that evoke Australia’s early colonial days, this is a wonderful, traditional novel.…Folding in vivid details, bright characters, and compelling dialogue, the story is a page-turner, a savory treat to be devoured.” – Foreward Reviews
Purchase Links

I loved this book.
Seriously.

Not only is the historical fiction interesting, but Baltakmens writing is such that you feel transported back to 1850's Australia, penal colonies, and London. The descriptions reminded me so much of Dickens.

The mystery is solid, and the links all fit but are not at all obvious. There's even a really nice little surprise about 3/4 of the way in that made me me say, "Ahhhhhhhhhha" out loud while sitting at my desk.  Very nice touch.
Carver figured out who the murderer was before I did.  I may have even said, "How the heck did he know?" outloud again. *rolling my eyes at myself here*
I also appreciated the female roles and their very important placements in the narrative.  Survivors, each of them, in her own way.  I felt saddest for young Nan Tucker who was swallowed whole by the system right when she was beginning to find her way and was most impressed by Ruth Tremaine...yep, Ruth...she worked the system for her own agenda and left more than a few men in her wake.

I also love historical fiction that schools me (in a nice way) on a topic I knew nothing about. I felt for these characters...truly, each of them, in his or her own way, was damaged. For survival sake, looking out for #1 was vital, no matter the cost or who you have to throw under the bus on the way. And, even though that sounds negative, it's really not. The way Baltakmens tells this story, you can even see why the criminals acted the way they did.

These were hard times (see what I did there?). Most of the world didn't live in homes full of servants who kept the fires lit and food on the table. Most of the world had to scrap and steal and sell just to keep themselves or their families fed. Many children had to survive on their own.  On the other side of the river, the convicts are banished and live even worse lives than you can imagine for the very same reasons.  And the rich get richer off the backs of the poorest.
Survival.

That's the world of A Hangman for Ghosts, and if you like that kind of ride, this one's for you.

The Cast of Characters

Full daylight spread over Sydney Town.  No shadows remained.  No relief from the sun in the vastness of this continent rendered prison, a Golgotha of the spirit. (12)

"The problem with common sense is that every man's common sense conforms to his prejudices," said Carver. (36)

"There are but two ways a convict can return to England. Serve out the sentence, or get an absolute pardon from the governor himself.  Any other escape to an English or Irish port is but a passage to the gallows." (71)

"And to survive here, and prosper, I begin to see, you must perforce still the whispers of the past in your head.  We should all need a sort of slaughterman for memories, a hangman for ghosts." (73)

"I have a convict maid, a convict cook, convicts to water my garden.  I have heard the children playing at games of lashing and shackling.  I have known babes that threaten their convict nursemaids with execution.  I am as familiar with transportation and assignment, the whole grand and awful design, as you.  I am a magistrate's wife, and I am as close confined by that as any felon." (92)

Death and the Lady, thought the colonel, closing his teeth on the end of his pipe.  There is our subject this evening, assuredly: death and the lady. (103)

"The question is, will you stand by, mewling about your misfortune in Sydney Gaol, while the old woman hobbles about and makes her own trouble, or will you take a man's part and set to?" (152)

"Whether you return or no, there will be no further contact with my wife, in word or thought or deed, or I will not forbear to avoid her ruin, or yours." (155)

Eleven men, bearded, lean, and haggard - for to feed a man on the hulks was to cut into their profit - resembling so many goblins gathered in a ruined palace. (179)

The hulk groaned and dead water shivered in its bowels, like a leviathan of the deep with poisoned dreams. (182)

"There's a dog that hears his master's voice even when the master ain't near. Let's see where he runs." (220)

A company of ghosts, therefore.  The ghosts of pride, and rage, and longing, of drunkenness, of gentleness, of boldness, determination, guile, thrift, and labour, thievery and despair, banishment and home-longing, sent back to haunt the shores they had quit under the weight of crime and judgement. (244)

The great city sighed as evening closed in, and the church bells, from Westminster to the slums and rookeries of Limehouse and Rotherhithe, began their tolling for evensong and repentance. (252)

Macquarie Harbor - Hell's gate
The Female Factory
The Rats' Line as it applies to convicts/prisons - first time I Googled this, I saw wayyyyy more rats than I ever wanted to...y'all, some of those rats were bigger than housecats!

Andrei Baltakmens was born in Christchurch, New Zealand, of Latvian descent. He has a Ph.D. in English literature, focused on Charles Dickens and Victorian urban mysteries.
His first novel, The Battleship Regal, was published in New Zealand in 1996. His short fiction has appeared in various literary journals, and his first historical mystery, The Raven’s Seal, was published in 2012.
Since 2004, he has lived in Ithaca, New York and Brisbane, Australia, where he recently completed a doctorate in Creative Writing at The University of Queensland. He now lives in Palo Alto, California, with his wife and son, and works for Stanford University as an instructional designer. 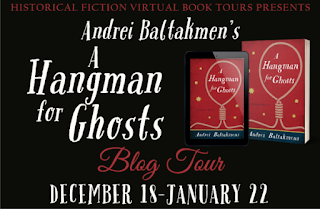 
Thursday, December 27
Interview at Passages to the Past


Monday, January 21
Review at Passages to the Past