TLC Book Tour Review - And When She Was Good 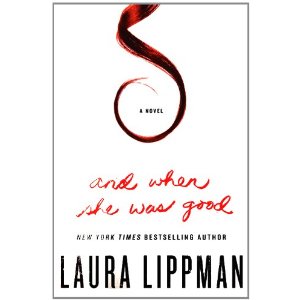 And When She Was Good by Laura Lippman
HarperCollins 2012

Source: from the publisher via TLC Book Tours

FTC Disclosure: I received a complimentary copy of And When She Was Good from the publisher in exchange for a review.  The opinions in this review are my own and made without bias.

Why?  I'm a sucker for a fast paced, women's issues loaded, scrappy female protagonist, thriller, and this one is all of that and more.

Cover?  The cover of my ARC is not the same as the cover on the final copy.  The ARC cover almost makes the story seem softer than it is...and there's nothing "soft" about Heloise's life, but it certainly lends itself to Heloise's profession, albeit a romanticized notion of prostitution .  But, the cover on the final version almost seems too simple...or maybe that's the way its supposed to be.  Heloise's hair is red only to match the color of her son's...in order to keep him safe from questions which might lead to the truth about his father.  But, Heloise's life is like that, one secret on top of another, a constant juggling act to keep up with the cover-up stories she's created.

What Now?  This one's a keeper...I'm happy to pass this ARC on to a reader who hasn't read Lippman, but I will be purchasing this one in hardback for my keeper shelves.  Yeah, cause I'm weird like that... :/  Give away the free book and buy it for myself.  Oy.
Just leave a comment letting me know that you are interested, if you've read any other Lippman, your email and blog address (if you blog), and one week from today, I'll choose a winner. :)

Compartmentalize, compartmentalize, comparetmentalize.  Sometimes she felt that her entire life was about creating boxes and storing pieces of herself in each one.  She never got the boxes mixed up, but it required ferocious concentration on her part, an eternal vigilance.  How could she trust anyone else to keep it straight?  No one else had as much to lose.

Smarter to be lucky than it's lucky to be smart.  That was one of Hector Lewis's sayings, his way of explaining that it was lack of luck that held him down, not his own laziness.  Well, she could still be smart.  She would find a way to get educated somehow, without upsetting Val.  She was a good liar when it came down to it.  She had to be.

No one values her.  That was a painful lesson to learn at her father's knee - at the end of her father's arm, at the flat of his palm - but once she absorbed it, she flourished.  It doesn't matter what others think she is worth.  She sets the price.

It was baffling to Helen, this belief that personal knowledge would lead to intimacy, something good, anything good.  It was information.  Information was power.  Why would she give away any more power?

Helen splashed water on her face, dried her hands on the old-fashioned towel, the kind that hung in a single loop.  You pulled down and supposedly dried your hands on the fresh part, but when had it last been replaced?  Her life was like this.  She pulled and pulled but always ended up making a full circle, and each pass was dirtier than the last.

Lucky for her, Val was in the market for a new protegee, locked up as he was for killing the last one.
But she had as good as killed him when she put him here.  Did that make it hypocritical to take his advice, to let him instruct her in how to set up her own illegal enterprise?

Probably.  But if there were no hypocrisy in the world, there wouldn't be any prostitutes.
Helen felt naive, a feeling no one enjoys, ever, despite the fact that we often pretend it's a virtue.   Naivete is just a euphemism for ignorance.

"Gas.  I need gas.  Can't risk running out even if we have such a short distance to go."
She doesn't; she has more than half a tank.  But sitting in the full-service lane allows her the time she needs to control her wildly beating heart, which now seems to have broken free from her chest and risen to her throat, where it's on the verge of choking her.

Helen/Heloise escaped an abusive household right into the arms of her first "pimp" Billy...who then passed her along to Val.  With no education, no money, no skills, and no self-confidence whatsoever at all, Heloise falls into a life from which there is no escape.  Over time Heloise does learn survival skills, sometimes doing things that she wishes she didn't have to in order to stay alive and keep hoping for a better day.  An unexpected pregnancy is the impetus for her escape attempt and puts the wheels in motion for a life of running from the truth.  Heloise creates her own prostitution business and stays barely a step or two ahead of being discovered for what she has been and really is...all the while learning more about life and what it takes to make it in a world where no one receives a break for free.  The takers are the only ones who win.

Val - as evil as he was...and he was evil (and mean), I thought this character was incredibly well developed.  He's a thug, no doubt, but the reader can't help to respect him and even fear him a little.
Heloise's self made education through books and courses online that she found relevant to her life and her sense of self.  Isn't this what education should be all about?

Audrey - Heloise and Audrey's relationship was complicated.  As Heloise's right hand woman, the reader's first instinct is for them to be close...but both are damaged, and damaged just enough that neither completely lets down her guard...ever.  Yet, the relationship works.  There's a lot to be said about true unconditional friendship between women.  I think women in today's society have grown too accustomed to tearing each other down rather than helping hold each other up.  No whining here at all...just two strong women, accepting life for what it is and moving forward any way they can.

Scott - Scott is what I believe holds Heloise together and keeps her from becoming a statistic or another unidentified druggie hooker body in the city morgue.

The pace - I couldn't put this down.  You've gotta love a book like that every now and then.  Your heart races; your eyes are blurry from no sleep, but you can't stop.  This will definitely not be my last Laura Lippman read.

The language - this is a fast paced, heart racing thriller with literary quality.  I'm no literary snob, I promise...I read all kinds of "stuff."  But, good writing is good writing, and Lippman is the real deal.

Obviously the issue here is prostitution.  I have never bought the excuse that some women enjoy prostitution and do it because they want to.  And, I'm appalled at the lack of support, financial, psychological, sociological, etc. for women who work in both the prostitution and porn industries.  The good ole boy network is alive and well within these "careers" and women are used and abused...no matter how you look at it.  Lippman deals with prostitution in the only real way it can be dealt with...there are no answers.  It is complicated, the consequences are varied, many times ugly, have far reaching effects, and is sometimes deadly.  Yet, some women "choose" to earn money this way.  Why they "choose" prostitution is sometimes even more convaluted than the industry itself.  I'm a firm believer in no easy answers...and I thoroughly enjoy a writer who doesn't try to create a fairy tale ending for a fairy tale world that frankly doesn't exist...for anyone.

Hector and Beth - Hector is a no-brainer, an abusive husband/father, jerk, two-timer, arsehole...nothing to like there.  But Beth?  She was supposed to be Heloise's mother.  Just because she chose to live the life she did shouldn't mean allowing Heloise to suffer as well.  I didn't expect Heloise to forgive her, but it was obviously difficult for her to walk away from Beth forever.  Lippman handled this relationship perfectly in the end.

Terry - this relationship didn't fit for me at all...and it seemed unlikely that given Heloise's past, she would fall for someone like Terry.  I didn't like him at all...too needy and too beggy and too sweet.  Too good to be true.

While Heloise is tough as nails, there were a couple of times where she almost panics and tells more than she should...to the wrong person.  She has a conversation with Bettina, another prostitute from the old days, for example, where I literally was yelling, "NO, don't do this...don't tell her all that!"  Of course, she didn't listen to me.  So then, I was shaking my head in disbelief and then also wanted to say "I told you so" when that particular information was used against her.  At first I found it unbelievable that Heloise would break like that, but she's holding a loaded deck and the handful of cards she's focusing on is getting harder and harder to keep straight.  It makes perfect sense that she would panic since she is at heart a very good person.  I just didn't like it.  I honestly wanted her to beat the crap out of the people who did her wrong.  So there.

While this is my first Lippman, I know that it is a stand alone rather than a continuation of her series about Tess Monaghan.  Whether or not you've read any of Lippman's series, I think you'll find And When She Was Good to be an exciting ride with the added bonus of quality writing and complicated women's issues embedded.  (As if there are any other kind of women's issues :/) 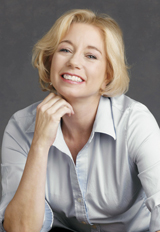