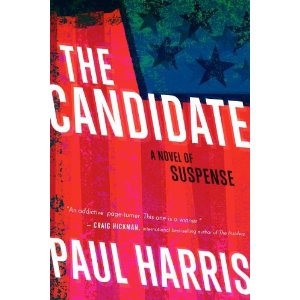 Why?  I am not fond of politics, but I'm grown up enough to know that I should know more than I do about the processes behind what makes our government work.  Especially since this is a presidential election year in the United States, I thought this book would fit right in.  And, it did.

Source?  TLC Book Reviews
I received a copy of The Candidate from the publisher via TLC Book Tours; however, the opinions expressed below are my own.

Cover? The cover is obviously an American flag...ahem, which I didn't notice until just now as I'm typing this review.  Doh.

What Now? The publisher is offering a copy of The Candidate to one US/Canada winner, and I'm happy to share my copy with another international winner who's interested :) Just leave your name, blog address and email and I'll draw 2 winners in 2 weeks.

It had been twenty years since she last loaded a gun with the intention of killing a man.

This place is a machine and it chews up people more than the cattle.  The immigrants come here, work for a pittance, then leave minus a finger or la migra sweeps them up.  And the companies just roll on, raking in the profits.

Benitez bent forward and lowered his voice, "I knew she was evil.  The moment I heard her speak our language.  I knew it from the look of her.  She has the bad spirit in her."

She was on her knees and I saw it in her face.  She had dead eyes.  Empty.  I have seen that look before, from people who fought or suffered too much in the war.

"I'm sick of seeing people just get by, Mike.  Believe it or not, these folks here are my people and I know Hodges will be good for them.  He makes folks believe in him and then they believe in themselves.  We harness that and we've got another Teddy Roosevelt on our hands.  Or another FDR."

The American public will take pretty much everything else but they have a Puritan streak a mile wide.

"Have faith?" Dee thought.  She fought down an urge to spit.  It was not her job to just have faith, she thought fiercely. Her job was to win.

"It's about time some Americano took an interest in what your country did there."

"Why did you try to kill Senator Hodges?" he asked.
She held his gaze for a moment and then spoke in a dull monotone.  "The righteous shall rejoice when he seeth the vengeance: he shall wash his feet in the blood of the wicked," she said.

"Welcome to Santa Teresa," Rodolfo said in Spanish.  "I am glad you have come to pay testament to what happened here."

He saw things clearly now; his thoughts blinked in the sudden sunshine in his mind.  Dee did not care.  She believed this was a contest to be won; a great game to be played.  There were scores to be tallied and battles to be fought.  But that was it.

Mike Sweeney is pulled up into the high ranks of Senator Jack Hodges's run for president after Senator Hodges narrowly escapes an assassination attempt.  Senator Hodges's campaign manager, Dee Babineaux, sends Mike out to find out as much as he can about the would be assassin and her connections, if any, to the senator.  What Mike slowly uncovers is a wartime nightmare purposely hidden from the American people in order to boost "The Candidate" to the White House.  What Mike does with the information and the lengths he goes to find out more will change his personal and professional life forever.

Mike  - Mike's a real guy...with ambition that competes with his will to be that real guy at every step.  His judgement seems easily clouded, first with Hodges, then Jaynie, Dee, etc. but he does eventually figure out who he really is and acts accordingly.

Dee - Dee's not always a "likeable" character.  She's brash, she's opinionated, a heavy drinker and she's one of the hardest working women you'll ever meet.  She's also expects the same of all those around her...no excuses.  On the job, 24-7, 7 days a week, 365 days a year.  Dee also has a focus and sticks to it, no matter what...WIN.  I would hate this woman in real life, but as a character, she made sense to me.  And, again, I don't like politics.  Dee played a high stakes game, and she meant to win.  Dee also represents what turns a lot of people off of politics...the drive, the focus on the game rather that what's "right," etc.  But, Harris gives the reader just enough of Dee's background to still be able to understand why she's so driven...but not enough that the reader feels sorry for her in any way.  She's just a "tough old broad," a Cajun from Louisiana so it was difficult for me not to admire her ability to pull herself up by her bootstraps and trudge through the mud, even though she sometimes pushed others under in her wake.

The historical information on the civil war in Guatemala and the people there - There were several times when I felt The Candidate reminded me of a tale out of Vietnam.  I need to know more about Guatemala and the cultures embedded there and am ashamed to admit, that like the Mayans argued in The Candidate, I didn't know anything about the decades civil war there nor American involvement.

The discussion of war crimes is an important one.  The lines between right and wrong definitely become blurry when military personnel are on course and are fighting against those who don't follow anyone else's rules.  I don't presume to know the answers here; I have never (thankfully) had to stand in uniform and put my life on the line to defend my country.  But, I think Americans are quick to form judgment on many things they don't completely understand...in a simplistic way, it's like giving an opinion about a book you've never read based on what you've heard other people say.  I was brought up believing that I shouldn't kill anyone, but in the military, killing someone, is in essence part of the job if necessary.  To me, it's a psychological battleground as well as a military one...one in which I can completely imagine losing my mind.  Harris does a good job of making this complicated without preaching any kind of agenda or pushing the reader to feel one way or another.

I loved it that I just happened to be reading this book during a presidential election year!  As I was listening to NPR radio the other morning, I realized I knew what the commenters were talking about when they were discussing "points" between candidates :)  Who was ahead/behind, projected wins in various states, etc.

Jack Hodges - too good to be true from the very first page.  I wondered if this was the author's intention...to make the reader's red flags go up long before any of the other characters.  I do wish there had been more depth to Jack...all we really get to know is pretty much what his public gets to know.  It would have been nice to hear more from him about his experiences in Guatemala besides just his firm stand that he never did anything he regretting while serving his country.  That got a little old.

I did find it a little unbelievable that such saavy political staffers were so easily ambushed by Hodges's charm.  It almost felt at times like he had supernatural powers...or maybe I'm just too jaded about politics to see it any other way.  Especially Dee...I felt she would be way too accustomed to the ways of the political world to not suspect Jack from the beginning.

I really wasn't sure about the Jaynie (Mike's ex-wife) connection...it felt a little left out in the cold and unfinished...as did the General Carillo side of things.  Jaynie especially never really connected to the rest of the story for me...I completely missed that thread.  Carillo, of course, is the evil general who truly kills for enjoyment, but I still think there could have been more development of this character.  The worst of all to me was that when the climax was reached, these characters just disappeared...we never found out what happened in the aftermath.  I sorta felt left hanging where they were concerned.

Christine - Jack's wife - again there could have been so much more development here.

Those interested in politics will like this one as well as some (like myself) who are not.  The Candidate is a fast read with just enough suspense to keep the reader wondering what piece of the puzzle Mike will put together next.