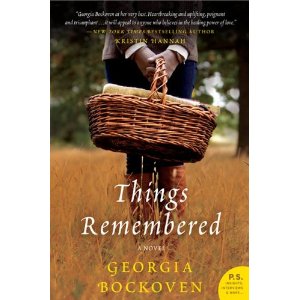 Source? the publisher via TLC Book Tours
FTC Disclosure:  I was provided a complimentary copy of Things Forgotten in return for a review.  The opinions below are unbiased and my own.

Title? Memories play a huge role in bringing Karla, her sisters, her mother and their grandmother together...stories of their lives are woven throughout Things Remembered as they put together the pieces of their lives in preparation to carry on without their matriarch.

Cover? Karla makes Christmas baskets for her store...as does Amy when she and Jim take over in Karla's absence, but I'm not sure of the significance of the basket on the cover with the woman holding it.

What Now?  I'm happy to pass this one along to anther interested reader who's looking for a feel-good, Fall read.  Just leave your name, email and blog address in the comments section if you're interested :)

She would come.  Not out of love, but out of duty.  The love she'd buried too deep too long ago.  Together they would find it again.  This was the reason the old woman hung on to life, this one job left undone, the long failure she could not forgive herself.

Karla was beginning to understand there were ways to listen that she hadn't recognized then.

Karla ran her hand over the soft fur and felt a powerful sense of having done so before.  But it was another cat, another time.  She closed her eyes and concentrated.  Nothing.  She was used to the feeling.  Her life was a series of free-floating thoughts and ideas and sensations; the smell of cinnamon made her happy, discarded shoes made her sad.

She shouldn't feel this disappointed.  He hadn't rejected her, he'd rejected using her.  Wasn't that the kind of friend she needed?

Thanksgiving is a time for tradition.  Or at least that's what it used to be.  More and more it's becoming a placeholder to mark the official beginning of the Christmas shopping season.  Think about it, Karla.  There are no presents to exchange, no candy to hide or give away, nothing but sharing a traditional meal with the people you love.

The hurt, the longing, the loneliness for a woman gone almost a quarter of a century was theirs alone.

Karla had never hit one of her sisters and was as surprised as Grace when she slapped her across the face.  "You ungrateful little bitch."

"You are the link between the women in this family, the only daughter who remembers her mother..."

In the end, it was the memories, not the wealth or belongings, that marked the sum of a person.  If Karla allowed those memories to die for lack of the right questions, she would be witness to two deaths.

Karla, Heather and Grace are sisters who lost their parents in a car accident and were shuffled around between their father's family members until landing permanently at their grandmother Anna's home (mother's mother).  The oldest, Karla, never really deals with her mother's death nor Anna's efforts to create a home for her and her sisters.  She returns as an adult to help Anna set her affairs in order before she dies from congestive heart failure.  Karla doesn't know, however, that Anna is determined to set things right between them and hopefully bring their family back together again.

Anna - she's strong, she's made mistakes, she's willing to admit them, she doesn't use her weaknesses as excuses, and she's determined to make amends with her granddaughter before she dies.

Food - Bockoven included recipes with this edition of Things Remembered and I have already added her applesauce cake to my Thanksgiving menu :)

Mark, the veterinarian - I'm just gonna be honest here...he reminded me of McDreamy from Grey's Anatomy.  I could just see his eyes in my mind as I read his and Karla's dialogue...a sensitive soul, this Mark For heaven's sake...now I'm swooning...look what Bockoven has done to me ;)

I loved the way the sisters could dish it out to each other, honest and upfront, calling a spade a spade when necessary...but then they got over it.  Their ties run deep.

My smoochy-smoochy radar flared a little while reading Things Remembered, and I had to fight not to roll my eyes at first...but then, before I finished the book, I had to fight back tears in my eyes...I had to wipe my eyes quickly and look around to make sure nobody was watching :p... but that's the kind of book this is...sisters and their grandmother...their lives, past and present and how their combined histories shaped the women they are.

The ending was too perfect...and again, I don't usually like that sortof thing...but I liked it...Bockoven certainly ruined my street cred as a hard core, vampire, detective, serial killer, no romance sorta reader.

This is an emotional story...one to curl up with with a cup of tea on a cool Fall day and enjoy just for what it is.  No deep critical analysis needed here, just a relaxing read.