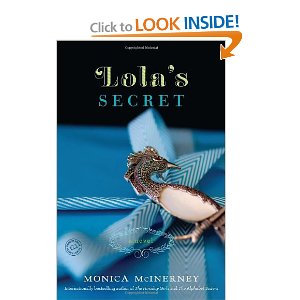 Source?  Publisher via TLC Book Tours
FTC Disclosure: Although I was provided a complimentary copy of Lola's Secret, the opinions and review below are based on my own opinions and are given without bias.

Why? Monica McInerney has been described as "the Maeve Binchy of Australia."  Lola is from Ireland but has lived in Australia most of her adult life.  I love Ireland, have always been intrigued by Australia, and I made a commitment to read Binchy's after reading so much about her after her recent death.  Lola's Secret is a family story as well, told from the viewpoint of the great-grandmother Lola.   I had very high hopes for this book.

Title? Lola drafted the Christmas guest questions before she sent them off...Lola's Secret was the name of the file in which those questions were saved.

Cover? I'm embarrassed to admit that I have no idea of the significance of the cover photo :( If you know, please share.  Dear Jenners, I'm talking to you since I completely missed the smiley face salad ingredients on Sad Desk Salad ;)

What Now?  The publisher has generously offered a copy to one reader (US and Canada), and I'll be giving away my copy as well (International).  Just leave your name, blog name and email address in the comments section and I'll draw a winner in 2 weeks :)

She touched her granddaughter on the cheek.  "Go darling.  And please cheer up.  Be grateful for what you have.  And try not to hate your sister too much.  Use your energy for something more fun."


That was life for you, she realized.  You could plot and plan and organize as much as
you liked, but you never knew what was going to come flying out of nowhere and give you a big surprise or a nasty shock.


"Divorce him, Carrie."
"And he won't even - What did you say?"
"Divorce him.  You've never really been happy with him.  File for divorce, go and live somewhere else with the three kids and hopefully you'll find another husband soon."
"But I love Matthew.  I don't want to divorce him."
"So why have you been sitting here complaining about him for what feels like the last six hours?"

Lola is the grand matriarch of the Quinlan family who lives and works in the Valley View Motel in Clare Valley in South Australia.  As the holidays approach, Lola's life gets busier and busier.  Between her time at the Thrift Shop and trying to keep the rest of her family from killing each other, Lola has her work cut out for her.  How she juggles it all as well as inevitable life changes are quite something for this spry eighty-four year old woman with a zest for living every day of her life to the fullest.

Lola's honesty - if someone was whining, she told him/her to get over it.

Lola's humor - her snippets and natural one liners kept me reading when nothing else did.

Mrs. Kernaghan - the old busybody - I would have liked it if Lola had smacked her around a time or two.

Geraldine - the daughter-in-law from hell.

Bett and Carrie - Lola's granddaughters (two of the alphabet sisters) possibly the two whiniest characters ever.

The stories of the Christmas guests - about halfway through the book, I truly was worried how McInerney was going to wrap things up with this subplot if she didn't get the guests to the hotel soon.  Because of the way things worked out for each of the guests, I never could figure out how the heck these individuals' stories were so important to Lola's story...so important as to take up so much space in the book.  I may have missed something really important, but I just didn't get it.

There were soooo many stories here that could have been told in depth...yet I never felt any of them moved past the surface...and worse for me was that I never felt these stories connected:
The Baby Squad/Carrie and Bett, the Thrift Store ladies/Luke and Emily/obnoxious Mrs. Kernighan, Lola and Alex, The Christmas guests/Jim and Geraldine/Ellen/Life without Anna, etc.
Yes, they were all a part of Lola's life, but they felt chopped up...almost like Lola short stories all smushed together :(

There's really not a whole lot of Australia or Ireland here...except just the setting and some childhood memories.  Again, no depth for my expectations.

I had to push myself to finish Lola's Secret.  It just didn't work for me.  That doesn't mean it won't work for someone else though.

I think if you've read The Alphabet Sisters, you should probably read this one since the story of Anna, Bett and Carrie begins there.  I may actually go back and read it myself to see if I feel any more connected to these characters. 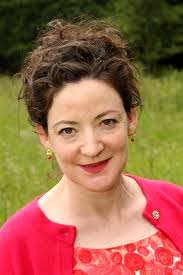