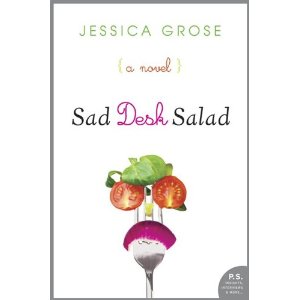 FTC  Disclosure: I received a complimentary copy of Sad Desk Salad from the publisher via TLC Book Tours in exchange for a review; however, the comments and opinions in this review are my own.

Why?  When this tour came around, I was looking for something a little lighter but still with teeth in it.  I liked that the main character, Alex, lives in NYC and is an aspiring writer via blogging.  I also frequently eat lunch at my desk so that I can leave work early enough to pick up my youngest daughter at school, so I can somewhat identify with the whole concept of not stopping work long enough to really enjoy a lunch.  I don't eat salad every day though :)...nor do I wear the same clothes everyday :p

Title? The phrase "sad desk salad" refers to the salad that many women eat at their desks every single work day...the same lettuce and veggies topped off with grilled chicken.  This lunch "break" is also the time a lot of women patrol websites, looking for the latest news and gossip.  Websites like Chick Habit shoot to have their most interesting, thought provoking and/or most volatile content up by this high traffic time of the day.
Cover?  It's ok...obviously there's a bite of salad on the fork...I'm enough of a foodie that it caught my attention.

What Now? This was a fun read with just enough suspense that I did actually look towards the back once bc I cared enough about what was going to happen.  I didn't find my answer, slapped myself on the hand for peeking and went back to my place.  I'd like to share Sad Desk Salad with another reader/blogger who's interested.  Just leave your name, email and blog address in the comments and I'll choose a winner in 2 weeks.

These days it feels like I get paid to be a bitch.  It makes me feel pretty terrible when I think about it, but the meaner I am, the better my posts do - and I can't afford to miss my quota.

The comments affect me less than they used to.  I try my hardest not to read them whether they're positive or negative, though most days I break down and take a peek at a few.  Okay, several.  But I never read every single one of them late into the night until Peter forcibly removes the laptop from my hands.  I'd never do that.

I bite my lip and go silent. Somehow her sensible words break through where Jane and Peter's could not.  The foundation of my swirling week has now crumbled, and saving my job suddenly seems like a really shabby excuse for my behavior.

"I can't answer that for you," she tells me.  Damn it.  "You need to sit with yourself - without the thousand distractions it sounds like you have - and figure out what it is that you want.

What privacy means now is an ever-shifting line - the old universal standards have yet to be replaced by a new code of conduct, and we're all just muddling through.

What I wrote could sometimes be construed as mean - but I always tried to be fair.  "Nice" is different from "good," as Stehen Sondheim says.  My new rule turned out to be: Don't write anything you wouldn't say to a person's face. Sober.

Alex Lyons is a blogger for a popular women's website that posts more flashy stuff than anything. Her job depends on a daily quota of posts as well as comments on said posts.  She competes with 3 other women bloggers whom she very seldom sees...they IM each other most days as they search the web for worthy info to write about.  Alex's boss Moira depends on her "Chicks" to keep the ball rolling on her website Chick Habit and applies pressure when and where it's needed and even when and where it's  not needed.  When cutbacks loom via the website's parent company, Alex finds herself making decisions about what she submits to Moira as well as what she writes about based on trying to meet her quota rather than quality and ends up posting a controversial video of an obnoxious political candidate's daughter.

The IM format breaks - at first they were kinda confusing bc some of the characters' screen names are not their real names...but once I figured out who was who, these breaks offered a real insight into a more digital world of writing that adds to this story bc the digital side is exactly what Sad Desk Salad is about.

Peter - this is a guy we all hope our daughters find...a sensible fella, a lot of fun, but knows when to be serious as well.  He loves Alex for who she is, warts and all, and calls her on her crap when she gets all wrapped up in the job enough to hurt herself...not him.  He doesn't give her ultimatums...just points out the facts and let's her decide.  Good guy, this one.

Alex's relationship with her mother - the first time her mom called her "puffin," I thought, "Oh no, here we go with the cheese!" but I was wrong.  The childhood connection is obviously there, but Grose made Alex's mom a woman in her own right, making her way in the world after her husband's sudden death.  Their relationship is one of space on a daily basis but closeness when needed...and even if they don't talk for a few days, that closeness automatically comes back...and there's no pressure.

Moira - while I don't "like" her and could never work for her (wait, I think I have), it was refreshing to meet a woman who was not afraid of being who she was, demanding what she wanted, and saying whatever she felt like...she reminded me of a crass Miranda Priestly from The Devil Wears Prada.

LOVE the murky privacy issues - this is such a timely conversation too with celebrities acting like idiots and being caught on tape and then those who are stalked and captured on film in the privacy of their own homes...and on into the children of celebrities and what's allowed/not allowed where they are concerned.
The conversation is not preachy and Grose lets the reader make up his/her mind based on a close look at both sides.

Darleen West - as a mom, one of the first cardinal rules for me is NEVER say "my kids would never do that" or spout off all the time about how great your kids are.  Just as soon as you do that, kids are gonna be kids and make mistakes...sometimes big ones.  Not only do you set yourself up by claiming to be the best parent in the world, but you set you kids up too...to fail...big time.  And, to make matters worse, you will have stepped on enough toes along the way, that when your kids do make mistakes, there are plenty of folks waiting to pounce on it, many times to the detriment of your kids more than you.

Rebecca West - 23 years old doesn't exactly get you the protection loophole of being a famous person's child.  As far as I'm concerned, all bets are off when the person whose "privacy has been violated" was doing something illegal.

Alex's mumu - huh??  I did not, could not understand why Alex kept putting on the same dress...also couldn't understand why she kept skipping the shower...I get that she's so wrapped up in her job and being available to Moira that she doesn't have time for anything or anybody else in her life...BUT a shower??

Alex's anxiety got on my nerves.  But, at the same time, I got it.  I've been that person (especially in my younger years) who's trying to decide what to do about a certain situation and ends up making the wrong decision despite what my gut tells me and the trusted people around me tell me.  But, it's hard to read about a person like that.  Alex is younger than me, so I chalked up her behavior many times to immaturity.

The ending wraps up a little nicer than I usually like, but I was in the mood for just that, so it was ok.

This was a fun, fast paced read; I read it in about 3 hours.  Sad Desk Salad would probably qualify for Chick Lit, but I don't usually like Chick Lit, so I think there's a little  more substance here brought on by the timely discussion of web writing and privacy issues.  I enjoyed getting a glimpse into the world of blogging professionally even though the author said in her Acknowledgements that her own personal experience working online was nothing like Alex's. 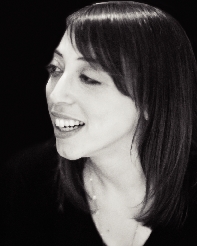