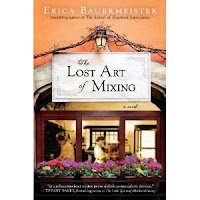 The Lost Art of Mixing by Erica Bauermeister
Penguin, 2013

Title? I believe the title is a play on words about the mixing of people and how are lives are made up of those we choose as well as those we're born with...and how sometimes the mix is even better than any of the ingredients by themselves.  The idea of mixing as an art, rather than just a haphazard grouping of people by chance, I think is perfect for Bauermeister's characters.

Cover? Tom looks in the window at one point during the story...as does Finnegan, and each sees the life inside of the restaurant.  The warmth of the wood and the feel of Italy on the cover of my ARC makes me want to read the book.

Why? I've had The School of Essential Ingredients on my TBR shelf for over a year...When the opportunity arrived to read The Lost Art of Mixing for TLC Book Tours, I jumped at the chance to read both it and its predecessor.

What Now? I didn't like The Lost Art of Mixing as much as The School of Essential Ingredients, but I'm anxious to read Joy for Beginners.

Lillian's love for her kitchen was the radiant gratitude of an artist for a space where imagination moves without obstacles, the small, quiet happiness of finding a home, even if the other people in it are passing through - maybe even a bit because of that (68).

Lillian knew that time was the only real solution for grief, but the loss of her mother had also taught her that unlimited lengths of time were nothing to be counted on (88).

The similarities between Charlie and Lillian were obvious --- their mutual love of food, the way they changed others' lives through the simple act of feeding them.  But where Charlie had been the warmth of sun on a beach, Lillian was more like fall, loss and bounty brought together (192).

In the follow-up to The School of Essential Ingredients, Lillian, Chloe, Isabelle, Tom, Al, Louise, and Finnegan's lives intertwine and sometimes intersect.  They don't all know each other, even those who do know each other don't always know each other well, and they certainly don't all realize how their lives affect one another.  Each is dealt cards that he/she must live with and adjust to while also living their lives as honestly and as purposefully as possible.

Reconnecting with some of the characters from The School of Essential Ingredients - especially Lillian and Tom's story...their story was, for me, the one that kept me going.

Chapters that switch points of view - I like characters and I think in a book like this where the plot is about how these characters interact with one another...or not, it's very effective to give each his/her own voice.  I even was interested in the chapters/sections on Louise and Al even though they were the least likeable characters for me.

The connections, the near misses of the characters' lives - I swear I could not help thinking about the "6 degrees of separation" game.

The theme of customs and rituals...from illness to marking a milestone birthday, numbers, etc.  While food still plays a major role in The Lost Art of Mixing, the traditions of life

Al and Louise - their story seemed so out of place to me...seriously, at the beginning I was afraid Al would turn out to be a weirdo...and then, once I met Louise, I realized exactly why he had issues on top of issues.  Of course, she also brought her issues to the table and WHAM, you've got a pretty impossible situation.  Given the overall positive vibe from The School of Essential Ingredients, I didn't expect this negative picture.

Louise - a seriously unlikeable character for me...I never liked her...ever...even at the end where there might possibly be a chance.

Abbey - I wanted to slap her and tell her to chill out.  Good grief...Isabelle's diagnosis was sad enough as it was without Abbey (the doctor) treating her own mother as an item on her to-do list.

Anyone who likes to read about food, people's histories and how those histories make them who they are, including how they react with others will like this book.  The Lost Art of Mixing isn't exactly the same as The School of Essential Ingredients though, and I think it's important for readers not to expect that same "warm fuzzy feeling."