TLC Book Review - The Round House 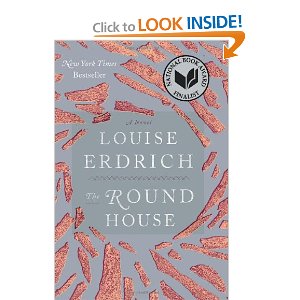 The Round House by Louise Erdrich
Harper Collins, 2012

Why?  I've always been interested in Native American culture...in our area the Choctaw Indians are still in existence and seem to live somewhat successful lives, especially in and around Neshoba County, Mississippi.
However, a cultural disconnect and stereotypes still abound as the Mississippi Band of Choctaws still struggles to find its place within modern culture and somehow hold on to its own spirit and stories.

Cover? My copy is an ARC and is different from the final copy...my cover is the outside of an old building, with peeling paint...obviously a literal representation of the round house itself which is the center of this story more symbolically than literally.

Title? Again, while some events do happen in and around the literal round house, I think there's a much more symbolic weight to the representation of the spiritual place where modern law collides with tribal law.

What Now? Oh man, you have no idea how my brain is spinning and how much more I want to read, Erdrich's work and others.

She doesn't know who the man was, Joe.
But will we find him? I asked in that same hushed voice.
We will find him, my father said. (11)

My father had become convinced that somewhere within his bench briefs, memos, summaries, and decisions lay the identity of the man whose act had nearly severed my mother's spirit from her body.  With all that we did, we were trying to coax the soul back into her.  But I could feel it tug away from us like a kite on a string.  I was afraid that string would break and she'd careen off, vanish into the dark. (45)

I don't want your kidney.  I have an aversion to ugly people. I don't want a piece of you inside of me. I'd rather get on a list. Frankly, you're kind of a disgusting woman.  I mean, I'm sorry, but you've probably heard this before. (125)

On what land? Was it tribal land? fee land? white property? state? We can't prosecute if we don't know which laws apply. (197)

She was wearing my father's robe.  I checked that night to see if she was wearing his robe on purpose, and sure enough she got into bed wearing it. (245)

Even I didn't want to know what I knew.  The best thing for me to do was forget.  And then for the rest of  my life to try and not think how different things would have gone if, in the first place, I'd just followed Bugger's dream. (310)

They'd built that place to keep their people together and to ask for mercy from the Creator, since justice was so sketchily applied on earth. (315)

A terrible crime is committed against Joe's mother.  To make matters worse, because of complications between tribal law and state laws, the man who is responsible may never be punished.  With the help of his friends Cappy, Angus and Jake, Joe maneuvers between a boy's world and the adult world to help his father find and prosecute the man who attacked his mother...His father, a judge, must carefully navigate a legal system that does not honor Indian laws on the reservation and has failed time and time again through deep and twisted loopholes that go back hundreds of years to bring justice for his people.
A story of honor, love, loyalty and survival.

The Indian spirit world interwoven within the story and the history of the Ojibwe.

The stories of the older generation...still honored...still listened to by the younger generation...even as they walked their daily lives in a modern white man's culture.

Grandma Thunder, Grandma Ignatia and Mooshum - just when things would get too intense, the lives of the older generation would resurface...either with a visit from the boys or Mooshum's dreams.  What lives they led!  Some may think parts of their stories are harsh or even TMI at times, but I think the old stories have to be comprehended from the perspective of the storytellers and how they interacted with one another and survived some of the worst days their tribe had ever experienced.  These are the stories that a person could sit and listen to for hours.

Linda Wishkob - The Round House is full of tough as nails women...who somehow survive some of the worst trauma and treatment imaginable...Linda's life is one that was on track to be snuffed out early, but she believed her spirit was saved for a reason.  I do too.

Joe's parents, Bazil and Geraldine - he was her strength and then she was his.  Nuff said.

Father Travis - creepy Catholic priest...I won't even give him the pleasure of writing about him any more.

no quotation marks...I've seen this format several times this year, but it didn't bother me as much in The Round House - I don't ever remember being confused as I read even though I did have to backtrack a couple of times to make sure who was saying what...and if anyone was really saying something or not.

The sadness that sometimes life can't be made right again.  The loss and the pain stay with the victims forever...and change them...the greatest challenge is surviving.
What a story.

Anyone remotely interested in Native American stories will eat this one up.  The Round House will stay with me for a while.