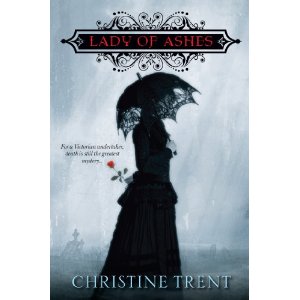 **FTC Disclosure - I received a complimentary copy of Lady of Ashes from the publisher in exchange for a review; however, the review below and the opinions therein are my own and offered without bias.

Title? Ashes to ashes...and all that entails...makes sense to me :)
Cover?  The cover made me first think that Lady of Ashes would be more of a ghost story...but it's not.

I was reminded of?  Bess Crawford historical detective mysteries

What Now? I'm ready for the next one! This is a keeper for me, and I'm looking forward to lots more from Violet Morgan :)

I killed a man today, and although I didn't mean to do it, I must confess that it wasn't unpleasant at all. (Prologue)

The half-hour before dinner has always been considered as the great ordeal through which the mistress, in giving a dinner-party, will either pass with flying colors, or, lose many of her laurels.
- Benton's Book of Household Management (45)

"If I hold a corpse in higher regard, it is because it is more respectful of me than my own husband, and doesn't see fit to criticize everything I do.  I also find that our deceased customers keep fewer secrets than you do. (63)

Gripping the lamp as a weapon that might somehow save her from whatever was burrowed in the coffin, she walked the walk of the damned toward it and cautiously peered inside, hoping she wasn't about to be strangled by some madman lying in wait for her. (96)

"Fletcher, sometimes I wonder how an idiot like you was born my brother."
"And I wonder how a prig such as yourself every became mine.  Peace, Brother?" He stuck out his hand.
Graham shook it.  "Peace. Against my better judgement." (163)

"Do you seek our signature for something, Lord Palmerston?"
"No, madam, I merely wanted you to hear from me about the state of things, especially since the criminals were related to the woman who-"
Victoria waved a hand. "Yes, yes, thank you.  We're tired now and wish to sleep." (235)

Because I could not stop for Death,
He kindly stopped for me.
The Carriage held but just ourselves
And Immortality.
-Emily Dickinson (1830-1886), American poet (305)

Adams's family history, well ingrained in its members, had taught him that liberty from the British nation was always just a minor argument away from being threatened.  From the Revolutionary War, to the War of 1812, to the recent scrape over the Trent affair, Adams men were always in the thick of the physical and verbal battles with their English cousins. (325)

Blood is quite red,
Dead bodies turn blue,
You shouldn't have noticed,
What I didn't want you to. (337)

Violet Morgan, Victorian undertaker, intelligent, confident, wife to prissy Graham, friend of the dead and those who love them (including Queen Victoria), and enemy of a serial murderer is caught up in constant chaos, none of which is her doing.  Between juggling her husband's family's business, helping those around her, being questioned by the authorities for unpatriotic activities, and raising a child she finds sleeping in one of the coffins one afternoon, Violet has her hands full.  While independent and a forward thinker, she also is an honorable and honest woman who loves her life, her family and her country and cannot look the other way when bodies begin turning up in questionable shape, even though it is not her place as a woman or an undertaker to question those in the medical profession.  Unfortunately for Violent, in the midst of everything else in her life, the murderer realizes that Violet is closing in and plans a special surprise just for her.

The window into what Britains thought about the American Civil War as it was raging...and their tip-toeing around trying to stay out of it while still keeping up with exactly what was going on...so they wouldn't be on the wrong side of whoever won.  "Neutrality" at its best :/

The snippets from various literature of the time related to either death or a woman's place in the home that served as an intro of sorts for each chapter...I found several favorites here :)

I'm not sure about the historical context of Queen Victoria and Prince Albert having any kind of communication or interaction with a commoner...especially a woman undertaker, so this was a little far-fetched to me...but I still liked it.  I did have some knowledge of the intensity of Queen Victoria's grief for her husband...grief that lasted the rest of her life, and I've always thought that was a sign of their true commitment to each other.  Not until this fictional work did I even consider the fact that she left a nation without a leader...even though she was still alive...and how complicated that was for those around her who could only take on a certain amount of responsibility dictated to them by law.

I had no clue whatsoever at all who the murderer was.  None. Smacked myself in the head when it was finally unveiled.  That hasn't happened to me in a long time...the not knowing part, not the head smacking part ;)

I've read essays about funeral preparations and of course all the horror stories...but Trent's way of delving into a subject most of us would rather not think about is very sensitive.  While nothing is covered up, somehow she manages to weave the details of embalming, moving limbs, preventing smells, applying make-up, etc. to a corpse in a way that is gentle and loving...if you can imagine that.  Trent accomplishes this through her incredibly likeable protagonist, Violet.

Mrs. Softpaws - this is a no-brainer for me...a kitten, saved by a little girl, who ends up saving her and her mistress right back.  Thank-you, yes :)

The details at the zoo...while I'm still not completely certain about the symbolism 2 important events that occur at the zoo, Trent paints a picture of a Victorian era zoo that is truly not that much unlike today's zoos...I honestly had no idea zoos existed then.

Samuel Harper - I keep trying to convince myself that I'm not a romantic...but to me, this is the very best historical fiction...mostly fact, keeps me interested and thinking, but a little flutter in my chest along the way as well.

Graham - for the life of me, I can't even imagine was Violet could have ever loved in this man.

My presidential history is probably not as it should be so I'm going to show my ignorance with my next statement...but I was a little confused with Charles Francis Adams, Abigail Adams, John Quincy Adams, Henry Adams, and John Adams...as well as the political framework and all the players of the time.  I actually had to do a little googling to review the family tree several times before being able to wrap my mind around the immense political involvement of the Adams family over several generations...even as far as the Lincoln presidency.  Trent's notes in the end were also very helpful in deciphering all the connections.

Mary or George - never cared for either of them...especially once George entered the story.

If you like historical fiction with some meat...and a strong female protagonist...with plans for a series in the making, jump right into Lady of Ashes.  I truly wasn't ready for this book to end.  I felt as if I really got to know Violet and am ready for the next chapter in her life.

Monday, February 25
Review & Giveaway at Peeking Between the Pages

Thursday, February 28
Review at The Broke and the Bookish

Friday, March 1
Giveaway at Passages to the Past

Monday, March 4
Review at The Novel Life
Review & Giveaway at The Maiden’s Court

Tuesday, March 12
Review & Giveaway at Always with a Book

Wednesday, March 13
Review at From the TBR Pile


Monday, March 18
Review & Giveaway at Confessions of an Avid Reader