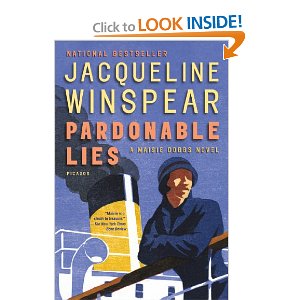 **FTC Disclaimer:  I received a complimentary copy of Pardonable Lies from the publisher in exchange for a review.  However, the review below and the opinions therein are my own and offered without bias.

Title? Lies that are not necessarily a bad thing...and how does a person know the difference...Perfect
Cover? Maisie in contemplation as she crosses the sea...also perfect.

Why? I've heard a lot about the Maisie Dobbs series and wanted very much to see what all the fuss was about when I read Elegy for Eddie.  I was somewhat disappointed in Elegy for Eddie but chalked my disappointment up to beginning the series so far into it rather than following my law of beginning at the beginning...where all good beginnings should begin...Ahem.
I wasn't, however, disappointed enough not to give Maisie another try but this time further towards the beginning.  I was not disappointed this time and definitely see what the fuss is about.

"Yes, it's one thing protecting oneself from the dead, but only too easy to forget the damage that the living can do, eh?" Hartnell smiled at Maisie, then at a place beyond Maisie's shoulder, as if sharing a secret with another. (57)

All cases challenge us: to reconsider who we are, how we see ourselves in this world, and how we view the past, the present, and the future from the unique observation point of our individual humanity. (146)

FROM THE TOWNSPEOPLE OF SAINT-MARIE
IN MEMORY OF FREDERIC DUPONT, MAYOR OF SAINT-MARIE,
GEORGES BAURIN, AND SUZANNE CLEMENT, WHO WERE EXECUTED
BY THE OCCUPYING GERMAN ARMY IN 1918
THEY DIED FOR THE FREEDOM OF SAINTE-MARIE AND FOR FRANCE. (196)

"What do you want?" Maisie covered fear with indignation.
The man retained his firm hold on her elbow. "Remain calm, Miss Dobbs.  Please act as if delighted to unexpectedly see an old friend." The man smiled broadly, his lips closed, his gray eyes cold.  He kissed her cheek. "Do not scream or otherwise draw attention to us.  Give me your luggage and come with me now. (256)

Walking slowly, Maisie approached the cemetery.  This was the place where she had stood, day after day, night after night, in the operating tent, where she had watched blood flow from the terrible wounds of war, where she had seen young lives ebb away, and on each boy's lips a cry for mother, wife, or sweetheart. (272)

Maisie's benefactor asks her to help a friend of his.  Sir Cecil Lawton's wife made him promise on her death bed that he would find proof of their son's death.  Missing since his airplane crashed during WWI behind enemy lines, Ralph Lawton was his mother's son and his father's disappointment.  Hesitantly, Maisie takes on the Lawton case as well as that of her best friend Priscilla's brother Peter Evernden who is also thought killed in the war.  The Lawton and Evernden cases take Maisie back overseas to France and into the wounded parts of her mind after witnessing death and destruction as a very young nurse at a casualty station during the war.  In her quest for truth, Maisie's touches a sensitive nerve quickly and fears for life after several near accidents...but who is responsible?  Who doesn't want her to find out the truth?  Which truth? Which secrets should stay buried? And which ones should be unearthed?  The answers aren't as clear as one would think.

I swear I don't remember noticing Winspear's impeccable descriptions of the period clothing in Elegy for Eddie.  Maybe it's there and I missed it somehow, but I loved how clearly I could see the pictures of the characters from their overcoats, to their cashmere shawls, to their Coco Chanel fashion sense, and on and on and on.  I hope this is a pattern of Winspear's bc I fully enjoyed it.

This story had many roads which led away from one another but also came right back around and met in the middle seamlessly.  I sometimes get confused with a story with so many things going on...so many characters who may or may not be related, but not with Pardonable Lies.

I think it's no secret by this point to mention that I like espionage...especially the early stuff...who knew??  I didn't realize Pardonable Lies would delve into early WWI spying and secret groups but was certainly intrigued even more when it did.

Madame Chantal Clement - I would love to read this supporting character's story!! Such a colorful woman with a history that is more than worth telling!

There is no romanticized vision of war here...and that's as it should be.  The lines between "good guys," "bad guys," and the "guys in the middle" are not always clear.  Reality.

The sadness...but what's a story about the after effects of war without sadness.  The sadness that is Pardonable Lies, however, is not a sadness that you feel as you're reading and then you wish those events hadn't happened to certain characters.  It's a sadness that I felt deeply...and still do...for those who've we've forgotten...the times and lessons learned right after war that we also seem to have forgotten...the utter destruction of the land, the homes, the human beings, a culture, a society, towns, families, etc.  This is my kind of historical fiction...the kind that makes you contemplate the lessons of the past that we could and should apply to the present.

I was a little taken aback by the story elements involving spiritual connections, reading minds, etc.  I also don't remember any mention of this in Elegy for Eddie, but obviously this is a large part of Maisie's story and her recuperation after the war with one of her mentor's, Khan.   I definitely want to know more of this history about Maisie.

Charmaine Hazelton - while I was able to summon some semblance of sorrow for her husband Jeremy and his connection to the lost Ralph Lawton, I felt no such thing for his ambitious and selfish wife.

If you like realistic historical fiction with an impressive, intelligent and independent heroine at the helm of an investigation, Maisie Dobbs is your gal.