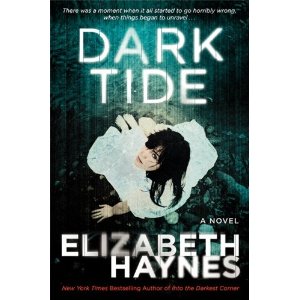 **FTC Disclosure: The publisher provided me with a complimentary copy of Dark Tide in exchange for a review.  However, the review below and the opinions within are my own and offered without bias.

Title? Genevieve's boat, Revenge of the Tide, is docked on a river...a river of dark, muddy water that comes in and floats the boat part of the day and then goes back out again for the rest of the day so the boat sits on mud.  I didn't really get the title and couldn't see past the literal interpretation.

Cover? I didn't picture Genevieve like the cover art nor did I picture the muddy river water and bank as portrayed on the cover.  Not the best cover I've seen.

Reminded me of?  "Burlesque" with Christina Aguilera
"The Sopranos" - the scenes in the club

Why? I liked Into the Darkest Corner and was looking forward to reading something else by Elizabeth Haynes.

What Now?  I left this one on the airplane for the next weary traveler.

She felt a shrill panic and tried to scream again, but as she opened her mouth she was falling.  And then the shock of the freezing water hitting her like concrete.  She gasped to take a breath and the water surged in.  Walls on either side of her, slippery, nothing for her clawing fingers to grip.  And then the walls closed in, squeezing her. (2)

I was breathing fast and hard and then I found my voice and screamed, screamed louder and harder than I ever had in my life. (38)

"I don't want to fall asleep," he said, but he lay down anyway.  We lay together on the bed, side by side, looking up at the skylight.  He was holding my hand.  I could feel the tension in him through his skin.
"When you're asleep, I'll go.  You'll be all right.  I'll call you tomorrow, is that okay?"
"Yes," I whispered. (140)

**Language Alert**
"You don't have a clue what you're mixed up in.  You're flitting around the edge of this - mess - not knowing just how fucking dangerous it is.  You think you can take care of yourself, but actually, you have no idea.  No fucking idea." (318)

Despite risking his life to keep me safe, since they'd let him out of the hospital he'd avoided me, ignored my calls, refused to talk to me, and above all given me no indication about how he felt, whether he still liked me, or even if he ever had.  And the cooler he was, the more he pushed me away, the more I wanted him.  It was a big, horrible mess that seemed to have no solution. (378)

Genevieve is caught up in a high pressure sales job, but her dream is to buy a boat, renovate it and live on the river.  Desperate for money, she falls into a job at a club pole dancing.  Before she realizes it, she's caught up in a world of secret deals, dirty money, and all that goes with it...including a dead body.

DC Jim Carling - I have to really watch myself for spoilers, but he made sense to me.

There are a few literary and musical mentions throughout the book...more musical than literary since the dancers chose the songs to for their dances.  Caddy's name was from The Sound and the Fury, and for some reason, that made me respect her more.

The action - once the story got moving...it moved quickly.  As the tension thickened, I even gasped a few times when Genevieve was surprised by unexpected events.

I never got used to the idea of having to manually empty the toilet on the boat...nor having to go in a bucket if the "toilet" was full...nor having to keep the door shut so that smells wouldn't escape the "toilet" room when it  and the bucket needed to be emptied.  Also, the hose for a shower or having to use a shared "shower room" and laundry facilities.  Those would be deal breakers for me.

Dylan - remember when you were young and you let that one boyfriend walk all over you...yet you excused his behavior over and over again...and just kept getting taken advantage of...that boyfriend from when you were really, really young...and dumb.  Remember that boyfriend you think of from time to time now as a 44 year old woman...the one whose ass your 44 year old woman self would like to kick?  Yeah, that one.
Dylan reminded me way to much of him.

The whole pole dancing, lap dancing, private rooms, etc. club scene.  I'm not a prude by any stretch of the imagination, but I can't wrap my mind around this lifestyle.

It took me 100 pages to get pulled into the story :(  Once the action started, however, I couldn't put it down.

Oswald - what did he have to do with anything???  He certainly wasn't going to tell anybody anything...and he didn't care one iota about a secret package.  Geez.

Genevieve's naivety - Look, lesson #1...Slim Shady is Slim Shady...if it seems shady, it probably is.  If it feels dangerous, it probably is.  If you think you probably shouldn't get involved, you probably shouldn't.  If a man you're attracted to is a moody "enforcer" who is only nice to you the one night you spent together, then good Lord, woman, find some self-dignity and move on...OY!
Genevieve also got way too comfortable around dangerous people...in her own words, she very quickly "overestimated her own importance."

Ian Dunkerley - skeezy skeezy...of course, another aspect of Genevieve's naivety was thinking she could work in sales during the day and a pole dancer on the weekend and nobody would ever find out.

The ending - seriously??  Whatever.

Even though it looks like I didn't like Dark Tide, I really did.  If you're looking for a quick, distracting read, with mobster characters and a dancer who flirts with danger, not to mention one of the enforcers AND a police officer, you'll like Dark Tide.