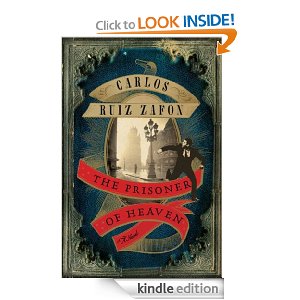 The Prisoner of Heaven by Carlos Ruiz Zafon
HarperCollins 2011

**FTC Disclaimer: I received a copy of The Prisoner of Heaven from the publisher in exchange for a review.  However, the review below and the opinions therein are my own and are offered without bias.

Title? I'm a little embarrassed to admit that I'm not sure which of them is the prisoner.  Fermin or Martin would be the obvious choices, but I could also make a case for several of the other characters, dead or alive, human or not.  I'd love to hear what others thought of the title and its meaning.

Cover? I'm assuming the man running in Fermin...but he's in a suit...this could indicate his planned wedding day, but I'm not sure.  Hopefully somebody will straighten me out on this.  The cover reminds me of the movie/musical "Catch Me if You Can."

Why? I missed this when it first came out in hardback but didn't miss all the reviews.  I can't stand feeling left out of something important, so I wanted to dive into Prisoner of Heaven if I could.

What Now? The Prisoner of Heaven reads like a classic to me...this one is going in the antique secretary, and I will most definitely be reading the other two books in the Cemetery of Forgotten Books series...sooner rather than later.

I was beginning to think that something odd must be happening to Fermin Romero de Torres - proud standard-bearer of civil resistance against the Holy Mother Church, banks and good manners in that pious 1950's Spain so given to religious services and propaganda newsreels - for him to display such urgency for tying the knot. (7)

"Do bear in mind that when women have a baby, it's as if someone had dropped an atom bomb of hormones into their bloodstream.  One of the great mysteries of nature is how they don't go crazy during the twenty seconds that follow birth.  I know all of this because obstetrics, after free verse, is one of my hobbies."  (45)

The prisoner started to whimper like a wounded dog and was shaking so violently that the governor, who clearly found the scene distasteful and wanted to put an end to the matter as soon as possible, exchanged a glance with the guard and, without saying a word, wrote the name the prisoner had given him in the register, swearing under his breath.
"Bloody war," he muttered to himself when they took the prisoner to his cell, dragging him naked through the flooded tunnels. (62)

"Sometimes one just gets tired of fleeing," said Fermin. "The world's very small when you don't have anywhere to go." (81)

His tiny figure was engulfed by the great beam of light pouring down from the glass dome in the ceiling.  Brightness fell in a vaporous cascade over the sprawling labyrinth of corridors, tunnels, staircases, arches and vaults that seemed to spring from the floor like the trunk of an endless tree of books and branched heavenwards displaying an impossible geometry.  Fermin stepped on to a gangway extending like a bridge into the base of the structure.  He gazed at the sight open mouthed.  I drew up to him and put a hand on his shoulder.
"Welcome to the Cemetery of Forgotten Books, Fermin." (264)

A mysterious stranger shows up one day at Sempere & Sons bookshop with a crypic message for Fermin Romero de Torres.  The stranger leaves the message with Daniel Sempere ("Son") who follows the stranger and then relays the message to Fermin.  In order to convince Daniel, who Fermin loves like a son, to stay away from the dangerous man, Fermin tells Daniel the rest of his story...the part that he left out so many years ago.
Fermin was a political prisoner during the Spanish Civil War of 1939.  He was a pawn of the communist regime and thrown into a cell at the prison of Montjuic Castle...a prison from which no one escaped and most never left alive.
There Fermin meets famed author David Martin who befriends Fermin as much as is possible in order to enable Fermin's survival as well as the survival, he hopes, of his lover Isabella Sempere and her son Daniel.  Martin is imprisoned because of his ability, or so his captor thinks, to re-write history, to perpetuate the propaganda and the career of one very evil but powerful man, Mauricio Valls.  Valls is the "governor" in charge of the prison while Fermin and Martin are incarcerated.
Somehow Martin must accomplish his task while holding on the very last threads of his sanity.
Fermin's bond with the Semperes is explained fully through the retelling of Fermin's history, and Daniel's relationships with both his father and Fermin are affected once the story is complete.  Their lives will forever be intertwined with that of Fermin and unfortunately Mauricio Valls.

Fermin and his wit - I can't tell you how many times I snorted at Fermin's one liners :)

Fermin's friendship, respect for women, respect for Senor Sempere...to have one friend like Fermin would be everyone's wish.

Fermin's history - a harsh history no doubt, but necessary to the story to understand the stranger, the "keys," and the man...even though I was stunned to find him such a seemingly well-adjusted person once Ruiz Zafon had told Fermin's story.

Rocito - saved by Fermin and spends the rest of her life repaying him...but is also able to look at her circumstances realistically while not laying around whining or blubbering about them.  Hard times call for hard measures, and Rocito had the figurative balls to keep moving forward.

Bebo - a small speck of kindness is an unbelievably cruel circumstance.

David Martin - despite his slow descent into insanity, he was smart enough and cared enough to do what needed to be done at that time in order to guarantee the future.

The writing - lyrical, smooth, flowing, entrancing, the kind of words and prose a reader actually wants to read more than once...just for the experience of the ride.  Great stuff, here...again, destined to be a classic in my opinion.

the letter from David Martin and the angel - I can't tell you about these things, but these are the kinds of tidbits that make readers jump up and down and clap their hands :):)

The Cemetery of Forgotten Books - if you read enough about history, you find that so many times as regimes changed, those in charge burned books...they purged the land of any and all semblance of previous regimes and then re-filled the bookshelves with their own agendas.  As fragile as books are, I find it very interesting that again, over and over, throughout history, books survive.  I am sure the survival of books is due in part at least to the actions of those who take it upon themselves to salvage the whole story...and not just the parts prioritized by the whims of ruler after ruler after ruler.  We owe these people throughout history a great debt.

The scenes from prison - graphic depictions of the cruelty, evil at work and pure helplessness on the part of the prisoner, even the guards who wish to help, and of course, the reader.  How many more times in my adult life will I learn of horrific history that I honestly never knew anything about?  How does this stuff get swept under the rug??

Mauricio Valls - I tried to think of an animal who takes advantage of any and every possible situation to further its life while stealing from other more deserving creatures...one that knows no bounds when it comes to lowering itself and one that is inherently evil.  Truly evil.  I couldn't think of one.  Valls is in a category all his own, and it degrades even buzzards to compare him to them.  Buzzards do actually have a purpose, as do weasels, etc, but not Valls.