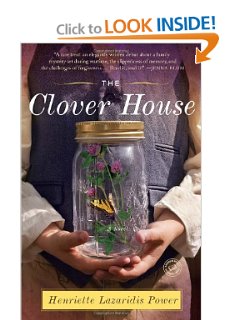 Format? paperback
Source? the publisher via TLC Book Tours
FTC Disclosure: I received a complimentary copy of The Clover House from the publisher in exchange for a review.  However, the review below and the opinions therein are my own and offered without bias.

Title? I'm sure I'm missing something...but the clover houses really didn't stand out to me as much as I feel they should have...which makes me not quite understand the significance of that particular detail as the title...I'm sure I'll feel stupid after I think this over for a while.
Cover? I had to look at it very closely to realize that it's Nestor...with the gift of the clover and the painted silk butterfly.

What Now?  There's a lot about Greece and Greek history that I'm ashamed to admit kept me from enjoying this book as much as I could have.  But, I'd like to know more.

When I finally reach the window, the uniformed officer glances back and forth from me to my photograph.  he must have an inkling that a petite woman named Calliope with dark straight hair has Greek heritage.  He gives me a little smile, and I return it and say my first words of Greek in Greece: "Geia sas." To your health. it is the polite form of geia sou, the message I see on bumper stickers and menus across Boston.  But there it shows up  as Yasou! and it makes me wince.  It conveys no particular meaning, serving simply as a kitschy proclamation of Greekness. (32-33)

It was math class in the middle of the morning when Clio noticed a few children by the window, looking up from their textbooks.  She followed their gaze but couldn't see anything besides the tops of the buildings across the street.  Then there was a drone and a whine and a roaring crash and the room shook.  Glass blew in from the windows and children began to shout and cry.  They all began to run. (188)

Greece was fully occupied now, divided up by the Bulgarians to the east, the Germans to the west of them and in Athens and Crete, and the Italians everywhere else. (312)

It all seemed so straightforward in the cathedral yesterday.  You come in a sinner; the priest forgives you; you leave with a clean conscience.  Outside the cathedral, though, things don't line up so well. (383)

He reads the inscription on the fob and laughs at the strangeness of the Scottish words on a Greek key ring in an American city.  But I know this is just right.  Just right for Nestor, the go-between boy and man - shuttling between Italian and Greek, past and present, home and away...(392)

Bostonite Callie's Uncle Nestor dies in Greece and leaves the contents of his home to her.  She must leave her fiance' Jonah, arriving in Greece to take care of the legalities of her inheritance as well as "reading" the story Uncle Nestor left for her, sifting through stacks and boxes of memorabilia.  A complicated family history and her cold relationship with her mother, have left Callie unsure of how to function as an adult and to take the next steps in her life.  Once she puts together the pieces of Nestor's puzzle, will she be able to understand what makes people do the things they do and make the choices they make?  Will she then feel free to make her own choices and take a chance on a different life?

The present day story intrigued me more than the history, and that shocked me.  In all honesty though, I think I would have enjoyed the history and the family stories more if I had a foundation for them.  I don't have that bridge at all, so much of the time I felt left out of the political and cultural conversations and even skimmed some of it by the time I got closer and closer to the end.

Jonah - if anybody could handle Callie, it was him.  At least he understood where some of her behavior came from...but he didn't try to push her either.  He knew the final choice had to be hers, of her own accord and her own timing.

The similarities between Carnival in Greece and Mardi Gras in America

Clio - even though there are reasons for her coldness, I never could bring myself to feel anything for her.

the idea of the Bourbouli - a cultural difference of course, but not one I think I would ever get used to

Stelios and Callie's other new "friends" - Callie was very irresponsible with this group, especially Stelios.

I think you need to have a foundation for The Clover House and/or an intense interest in Greek culture as well as political history during the time of WWII.  The Clover House is a family saga, one that isn't always pretty, and how those struggles mold us into the people we are.