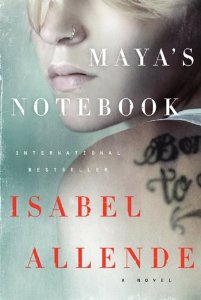 **FTC Disclaimer - I received a copy of Maya's Notebook from the publisher in exchange for a review.  However, the review below and the opinions therein are my own and offered without bias.

Cover? I pictured Maya a little rougher than this...but the cover still works.

Title? Maya's Nini gives her a notebook to write her story where she left off at 15.

Why?  Maya's Notebook is my first read by Isabel Allende, so I was tempted just by the author herself...the storyline is one that compels me as well though.

What Now?  I have some catching up to do, but Maya's Notebook will certainly not be the last Allende novel I read.  Where do I start next??

As I came out of the museum, I met a dog.  He was medium in size, lame, with stiff gray fur and a lamentable tail but the dignified demeanor of a pedigree animal.  I offered him the empanada I had in my backpack, and he took it gently in his big yellow teeth, put it down on the ground, and looked at me, telling me clearly that his hunger was not for food but for company (15).

He held out his hand and looked me over quickly, evaluating the remains of blue nail polish on my bitten fingernails, frayed jeans, and the commando boots, spray-painted pink, that I'd gotten at a Salvation Army store when I was on the streets.
"I'm Manuel Arias," the man introduced himself, in English.
"Hi. I'm on the run from the FBI, Interpol, and a Las Vegas criminal gang," I announced bluntly, to avoid any misunderstandings.
"Congratulations," he said (17).

The Irishman and my Nini get together often to analyze gruesome murders over tea and scones.  "Do you think a chopped-up body could be dissolved in drain cleaner?" would be a typical O'Kelly question.  "It would depend on the size of the pieces," my Nini might say, and the two of them would proceed to prove it by soaking a pound of pork chops in Drano, while I would have to make notes of the results (41).

Once I start talking about my Popo, there's no way to shut me up.  I explained to Manuel that I owe my love for books and my rather impressive vocabulary to my Nini, but everything else I owe to my grandpa (43).

Sometimes I wish I could have a shot of vodka for old times' sake; though the old times were awful, they were at least a bit more exciting than these.  It's just a fleeting whim, not the panic of enforced abstinence I've experienced before.  I'm determined to fulfill my promise - no alcohol, drugs, telephone, or e-mail - and the truth is, it's been easier than I expected.  Once we cleared up that point, Manuel stopped hiding the bottles of wine.  I explained that he shouldn't have to change his habits for my sake - there's alcohol everywhere, and I'm the only one responsible for my own sobriety (47).

They kept me captive at the academy in Oregon until the beginning of June 2008, with another fifty-eight rebellious young people, drug addicts, attempted suicides, anorexics, kids with bipolar disorder, kids who'd been expelled, and others who just didn't fit in anywhere (102).

Barter is an essential part of the economy in these islands: fish are exchanged for potatoes, bread for wood, chickens for rabbits, and many services are paid for with products.  The baby-faced doctor from the boat doesn't charge, because he works for the National Health Service, but his patients pay him with hens or knitting.  Nobody puts a price on things, but everyone knows what things are worth and what's fair and keeps track in their minds. The system flows elegantly; debts are never mentioned, neither is what's given or what's received (132).

Brandon Leeman was always up front with me.  I can't claim that he misled me about what kind of business and lifestyle he was offering .  I stayed with him knowing exactly what I was doing (160).

After eating we settled down on the worn-out sofa, him to read and me to write in my journal, with our big mugs of sweet and creamy coffee with condensed milk.  Rain, wind, the tree branches scratching on the windowpane, wood burning in the stove, purring cats, that's my music now. The house closed up, embracing us together with the animals (163).

Between the liquor and the crack I floated adrift for two days without sleeping or eating or washing, dripping with vomit, because I couldn't make it to the bathroom. When I finished off the booze and the drugs, I emptied the contents of my purse and found a paper twist of cocaine, which I immediately sniffed, and a little bottle with three sleeping pills, which I decided to ration.  I took two, and since they had not the least effect on me, I took the third (234).

Officer Arana gave me ten dollars and his cell phone number, so we could get in touch and I could call him if I got into trouble.  He warned me that I should let him know before I left the city, and he told me to take care; there were some very dangerous neighborhoods in Las Vegas, especially at night, as if I didn't know.  As we said good-bye, it occurred to me to ask him why he was out of uniform, and he confided that he was collaborating with the FBI: counterfeiting was a federal crime (264).

Blanca and I wrapped him in a circle of arms and chests and kisses, holding him, crying with him.  We had seen one of those cells.  After a lot of begging, the guide had allowed me to go inside.  I had to crawl in on my knees, and once inside I stayed cringing, crouching, unable to change position or move, and after they closed the door I was trapped in total darkness.  I couldn't bear more than a couple of seconds and started shouting until they pulled me out by my arms.  "The prisoners were kept buried alive for weeks, sometimes months.  Few made it out of here alive, and they often went crazy," the guide had told us (335).

To celebrate, he drank a whole bottle of champagne by himself.  He offered me a glass, and I took the opportunity to tell him that I can't drink because I'm an alcoholic.  "How unfortunate, gringuita! That's worse than being a vegetarian," he exclaimed (383).

19 year old Maya has seen and lived through it all.  A recovering addict, and on the run from criminals, she's sent to her grandmother's home country to hide. There she lives with an old friend of her grandmother's, Manuel, and learns who she is and what she is truly capable of as she thinks about the life she's lived so far.

Allende's descriptions of Las Vegas, the Nevada heat and desert were so real, I even had to turn down the air conditioner.  I've been to Las Vegas in the dead heat of summer.  The seediness, the dirt, the hot air, the addicts and prostitutes on the street night and day and crooked cops that Maya falls into there is exactly as I imagined it would be.  I'm sure there are some lovely places somewhere in Las Vegas, but it's not a place I would want to visit again.

Fahkeen, Dumb-Cat and Literati-Cat - along with several other animals play important roles in Maya's recovery...no surprise to me (the animal lover) :)

Manuel - when Manuel was first introduced, I was so afraid he would be another of Maya's "mistakes," but how do you describe a character whose life meant so much to Maya's and hers to him.  He took her in at the request of her grandmother, gave her a home, freedom, advice, honesty, clothes to wear, a job, things and people to care about...he gave her back her life and helped her in his own quiet way to realize that she and only she was in charge of her future.  What an incredible character.

Maya's honesty about her past as well as her recovery...the raw details, not dramatized versions, the beginnings of her addictions and criminal actions in a Berkley high school, as well as her Las Vegas boss Leeman, the other young kid that lives with her and Leeman, Freddy, and strung out prostitutes.

Alternative timeframe - Maya tells her story while in hiding and melds her past with her present.  Maya's past is chaotic to say the least and it was comforting to me as a reader (and mother) to know while reading the past that she would absolutely, somehow make it out of the pits she fell into.  There is one incident in particular where Maya gets into a truck after escaping from an institution she is sent to rather than go to jail.  I cringed when she stepped into the truck, bit my fingernails through the ride, the stops, the overnight, her realization that she'd made another mistake and that somewhere out there her grandmother was probably having a nightmare that this very episode was happening to Maya.

Maya's strength and perseverance - please don't tell me you are strong...unless you've walked a mile in this young woman's shoes.  I particularly LOVE the way Maya never wallows in her misery and never expects pity from anyone.  She is one tough cookie.

Getting to know the Chiloe'tan culture, history, customs, people, blessings as well as benefits...Allende takes an honest look at this part of the country.

Popo and Nini - how could you not like these characters.  These two, along with Manuel, O'Kelly and Blanca are the very reasons Maya is able to survive and grow.  What's even better about this story is that in her own way, Maya is able to rescue each of them right back.

Olympia Pettiford and the Widows for Jesus - I LOVE Allende's depiction of this group of women who are obviously very religious.  Allende could have very easily shown them as ridiculous, stupid, and followed every stereotype in existence.  But, she didn't.

The family secret that was so neatly tied up in Maya's story that I never even suspected it.

Daniel Goodrich - I guess it would be implausible for a nineteen year old to NOT fall head over heels for someone while she's in Chiloe', but I didn't like him just the same.  Pretty typical male reaction if you ask me.

Maya's mother - really?  You need a license to fish and all that...

Maya's father - see above.  I separated him from Maya's mother because he does attempt to redeem himself eventually...but he's still under the "didn't like" section :p

A recovery story on many levels with deep cultural and feminist themes, I honestly can't think of who should NOT read Maya's Notebook.  There's something here for all...young and old, man and woman.