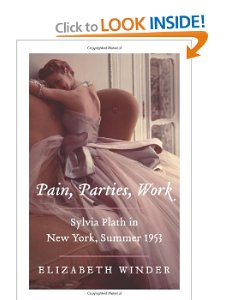 I'm reminded of? "The Devil Wears Prada"
A Room of One's Own, The Yellow Wallpaper

What Now?
an immediate re-read of The Bell Jar
Manhattan When I Was Young by Mary Cantwell
The Group by Mary McCarthy
A Google session including:
Betsy Talbot Blackwell - BTB - Editor in Chief of Mademoiselle
Florence Crittenton homes for unmarried pregnant women
Ocean 212
Polly Weaver
Cyrilly Abel, Managing Editor of Mademoiselle and Sylvia's boss during June, 1953
Ethel and Julius Rosenberg
Gloria Kirshner
Margarita Smith - Fiction Editor at Mademoiselle and sister to Carson McCullers

Before she became an icon, before she was Lady Lazarus, she was Sylvia - a New England college girl with an internship in Manhattan (xiii).

The Schobers were very Austrian and very literate (57).

And there was something of  Saint Therese de Lisieux about her - collecting cockles and seaweed and talking to mermaids.  A sensitive little pagan with a blond braid down her back (60).

Her attachment to language was earthy, physical, and immediate (95).

I get a little frightened when I think of life slipping through my fingers, like water...so fast that I have little time to stop running I have to keep on like the White Queen to stay in the same place.
- Sylvia Plath (Letters Home) (108).

The journals show a remarkably solution-oriented person.  Even in the midst of the blackest desperation, her thoughts had a beautiful practicality to them, rapid fire, and directed outward.  Sylvia was not content to roam the wild moors of her mind for its own sake - she was totally in love with the external, physical world and wanted to stay there (140).

The Comstock Laws of 1873 were still in effect in 1953, prohibiting the distribution of birth control.  This would explain in part why Sylvia's junior year at Smith began under the shadow of suicide attempts, hasty marriages, and trips to "Dr. No." (155)

Sylvia summered in Manhattan during a unique cultural moment.  It was one of the most ambiguous, baffling, vertigo-inducing epochs in history for educated, ambitious young women (171).

There it was - that sick, clammy feeling that you have been Found Out, that you are an imposter - that she didn't deserve the awards, the city glamour, or even these clean leafy things like green lawns and tennis courts (226).

ANNE SHAWBER: Sylvia Plath was a genius, a poet of such incredible talent that she was unique.  She felt that difference, and didn't understand it, and instead thought there was something wrong with her.  When she tried to be like other girls, she was miserable because she couldn't understand.  And no one near her had the brains to figure it out and instead kept trying to shock her into a world which was not hers (250-251).

In June, 1953, 20 young college women, including Sylvia Plath, were chosen to serve as guest editors of Mademoiselle magazine for one month.  They lived at the Barbizon Hotel for Women, worked on 5th Avenue, and experienced for the first time a life on their own...sortof with freedom to make decisions and honestly figure out who they were and what they wanted of life...again, sortof.  Culture, society, expectations and need clashed the entire time the girls lived in New York.  Many, including Sylvia, left New York at the end of that summer a changed woman...forever.

A description of Sylvia as a young woman, with hopes and dreams beyond the legend, beyond the
writer...just Sylvia.

At first I wasn't sure I was going to like all the detailed attention on what the girls wore...the lipstick colors, the heel heights, girdles, etc. until I realized these details were, in fact, a huge part of that June.  As guest editors of a fashion magazine and young "career" women of the 1950's, as they began to have more options, these choices would definitely be some of the ones they focused on.

The back and forth peeks from The Bell Jar to Winder's story and how the two meld as well as disconnect at times...the fact and the fiction.

The quotes Winder weaves into her story are perfectly placed and show examples of how Sylvia approached her summer in NY, and of course, how she left it...in her own words.

The idea that Sylvia as a lifelong journaler only made one entry during the entire month of June, 1953 (her reaction to the execution of Ethel and Julius Rosenberg)...will keep my brain humming for quite some time.

An honest look at women's sexuality and societal expectations in the 1950s and beyond.

I'm a geek and I don't apologize for it...as always, I appreciate a healthy does of credits, notes, a substantial bib section and anything else that gives me a place to dig...I know I will never learn everything I want to know about everything, but I can only learn so much with help from authors like Winder who provide so much for me to chew on and in such an organized manner.

On a lighter note...the idea of nylons...every. day....any. day...but especially not during a heat wave in NY.

More seriously though, the idea that medical professionals actually treated Sylvia's first breakdown with archaic, ridiculous electroshock therapy based on a process used with pigs headed to be slaughtered??? Or, the just as horrendous idea of insulin shock therapy???  Really?? And, these people were medical professionals??  I wanted to scream after a few glimpses into Sylvia's early treatment.

The short chapter about Sylvia's summer after NY...made me sad...just sad.

Pain, Parties, Work is an obvious read for anyone who is or ever has been a fan of Sylvia Plath or who has read and been changed by The Bell Jar.