This review is my youngest's 2nd review here on Peppermint Ph.D.  Her first review, Mosey's Field, can be found here.
The youngest knows, as do my other daughters, that I have a hard time saying no to books.
As a matter of fact, it's pretty impossible.  She constantly brings home those little Scholastic flyers and book fair invitations because she knows I'll write that check :/
I'm hoping over the summer you'll be able to hear much more from her as she works her way through her piles of books :) 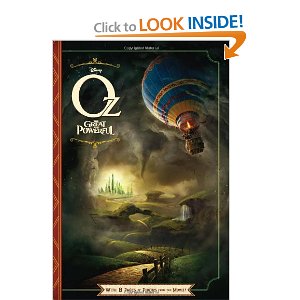 Disney's Oz the Great and Powerful by Elizabeth Rudnick
Disney, 2013

Cover? It's very mysterious bc there's a tornado and a balloon that can't stop with a magical world behind the tornado.

Title? It is very related to the Wizard of Oz because it has "Oz" in it.

Why? I've seen the movie and I just wanted to read the book and see how it is.

How did the book compare to the movie?  The book was not different at all from the movie.

What Now? I'm going to go on to Animal non-fiction books next.

May looked up to see a man dressed in a turban and a long magician's coat standing in front of the curtain.  This was Oscar Zoroaster Phadrig Isaac Norman Henkle Emmanuel Ambroise Diggs, otherwise known as the Great Oz (3).

Standing on the shore stood one of the most beautiful women Oz had ever seen (28).

Summary
**spoiler alert...if you're worried about ruining the story, I'd stop about half-way...we're still working on the concept of not telling the entire story :p

Once upon a time lived a man named Oscar Zoroaster Phadrig Isaac Norman Henkle Emmanuel Ambroise Diggs, otherwise known as the Great OZ.  He was really a bad man.  He was also a magician.  He would use wires and put doves up his sleeve.  Until one day a terrible storm came along.  He had a hot air balloon to fly him away from the storm, but that did not help him at all.  He flew straight into the storm.  He shouted out to the Heavens, "Please, let me live.  I promise I will be a good man."
Nothing happened after that.  He closed his eyes and then something happened.  He made it into the beautiful land of Oz.  He also met a beautiful girl named Theodora.  They had to defeat the wicked witch.  On their way there, they met a monkey named Finly.  They also met a little girl named China Girl.  Her hometown had been destroyed by the wicked witch.  They had seen that Oz had fallen in love with the nice witch Glenda.  Theodora had gotten really mad because she loved Oz.  Now she is only against him.  Theodora's sister Evenora gave Theodora a drink that would turn her into a witch.  Evenora described what it would turn her into one.  She looked at the cup and drank it.  She was now a witch.  Her and Evenora tried to rule the kingdom, but Oz, Finley, and China Girl stopped her.  Glenda gave them something in return.  She gave Oz a kiss on the lips.  Before you knew it, Oz was sitting on the King's throne.

There are scary parts.

I liked how the story used magical creatures.

How Theodora turned to her evil sister Evanora and became the Wicked Witch of the Wild West.  Theodora needed to tell Oz that she liked him before Glenda and not turn on him.

My big sister Kendal would like this book because she likes a lot of mystery stuff.  I also think that kids should read the book before they go see the movie because I was going to, but I saw the movie first and that kindof spoiled some things.