However Long the Night by Aimee Molloy - TLC Book Review 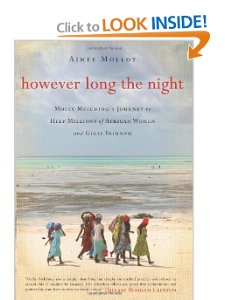 However Long the Night by Aimee Molloy
HarperOne 2013

Format? hardback
Source? the publisher via TLC Book Tours
**FTC Disclaimer - The publisher provided me a copy of However Long the Night in exchange for a review.  However, the review below and the opinions therein are my own and offered without bias.

Title? as are so many of the themes associated with the Sengalese culture, the title is based on a prophetic saying.  There are powerful tenets in this book...and the title is just a hint at the persistence, commitment, and community building efforts that this book is about.

Cover? the women are walking freely on the beach as if they are on a holiday on the beach...their colorful clothes look light and breezy...a semblance of a newfound freedom.

Why?  I am a woman.  I have 3 daughters.  Do I need any more reason to want to read this book?

I was reminded of? The Lottery by Shirley Jackson

What Now? I don't even know where to begin.  I have so much to look up, so much to read...I have been deeply moved by Molly Melching's story of liberating education programs for women.

For a girl not to be cut - to be a bilakoro, a name considered among the worst insults in their culture - was unimaginable (5).

"...Until African villagers themselves are capable of educating others in a language familiar to all, we will never achieve the type of development that is truly African.  This is a word you should never forget."
Molly was intrigued.  "What is the word?" she asked.
Cheikh Anta paused and smiled. "Tostan." (59).

"This is a different culture with a very different belief system and worldview than the one you're used to.  When you see something in this culture that you don't understand, you must never judge by your own belief system, because it will only lead you to great frustration..." (80).

"It blew me away," Molly now recalls.  here her own daughter, an American, was feeling the pressure of the tradition.  "It was a very decisive moment in my own understanding of the power of FCG, and I knew what I now had to do." (126).

Where, after all, do universal human rights begin?  In small places, close to home - so close and so small that they cannot be seen on any maps of the world....Such as the places where every man, woman, and child seeks equal justice, equal opportunity, equal dignity without discrimination.  Unless these rights have meaning there, they have little meaning anywhere.  Without concerted citizen action to uphold them close to home, we shall look in vain for progress in the larger world.
-Eleanor Roosevelt (137).

"...I know now in my heart the tradition does not reflect the values of our culture.  It comes down to this: if we are truly about well-being and peace, this is not the right path." (151).

Placing blame, insulting people's personal beliefs, or trying to force one's values on others was not the way to go about solving problems and creating peace and justice. (157).

"Life has legs and continuously walks.  We must walk with it or we will be left behind.  Remain with me.  Let's keep walking." (165).

"Judging or shocking people rarely proves effective in getting them to see another side," she argues, "or to change their views on any topic." (176)

"...Would I give in to this fear and beg to go home, or could I just accept the idea that whatever was going to happen would happen?"  The voice of her father, Al, came back to her, offering a bit of advice he liked to share: "Don't build dams in your river, Molly.  Allow the water to flow and go where it takes you.  If you do, you will be ok." (228)

The secret is that in our extended family we are united not by what makes us all obviously different - black, white, American, European - but by the essence of what we all have in common: members of the same human family with a deep awareness of our common responsibility for our fellow human beings....Together we dare to hope, to love, and to care.  And together we are all, along with you, creating a better world for tomorrow." (235).

Through Tostan classes, human-rights based education, Molly Melching was able to guide a generation of  African women to become aware of their potential as human beings and to encourage them to have a voice in their life choices and those of their daughters and granddaughters.

The Sengalese/Wolof words paired with the chapter names...in some ways I felt Molloy sought to immerse us in the culture just as much as Molly always felt it was important to do.

FGC - FGC was not a new "concept" for me.  In the back of my mind somewhere I had heard the "legends" of the barbaric rituals some cultures still practice today.  But, as far as my mind was concerned, these happenings were distant drums far off somewhere and maybe something I would read about in National Geographic or on a History Channel program from time to time.  Reading Molloy's book, there was enough detail of the 4 variations of the process for me to seek out further information via the Internet and yes, even Youtube.  I'm going to be brutally honest here...I spent a lot of this "discovery" time with my legs clenched together or crossed tightly.  I think every woman should spend a little time educating herself about FGC and just how big of a problem the cultural practice is, and not just in Sengal either.  I don't recommend this as a way to "shock" someone into outrage...but as a means of education, knowledge, awareness.  Who are we really if we choose to close our eyes and turn our heads in the face of humanitarian need.

Human rights...to walk away from Molloy's book exclaiming a victory in the fight against FGC in Senegal would be (as cliche as it sounds) missing the forest for the trees. The Tostan classes taught the women in these African villages that they had rights, responsibilities, and gifts as human beings.  They were not "taught" to reject FGC; they rejected it themselves using their own decision making processes while embracing the true nature of their culture.  Wow.

Just as Molly respected the Sengalese and their culture so does she and Molloy respect the Westerners or European people who might be reading However Long the Night.  While for most American women, the idea of submitting ourselves to a debilitating procedure like FGC and/or that our mothers would do this "for us" thinking that they were doing what was best for us...even loving us by forcing "the tradition," is abominable at best.  We can't even conceive it.  But, somehow Molloy makes us conceive it.  The reader doesn't come away with the idea of the villagers as "ignorant" but comes away with more of an understanding of the WHY behind the practice.  NOT that the reader comes away with a justification for FGC...please don't misunderstand...but an understanding as to actually HOW the practice continues and WHY the people who practice FGC defend it so fully.  I found myself even comparing FGC to some Western cultural differences that we defend with every fiber of our being.

The details of the Tostan classes and educational theory behind the classes.  The social norm theory, other educational theories that consider individual needs, and dynamics behind and within the classes really are valuable for every aspect of education....which is why, of course, the Tostan programs were able to be developed for literacy programs, marriage expectations between husband and wife, early childhood communication and cognitive stimulation programs, child forced marriages and childbearing, and foot binding in China, etc.

The Declaration on the Elimination of Violence Against Women was adopted by the United Nations in 1993.  1993 is the year my oldest daughter was born.  1993.
1993.
There is obviously still much work to be done in human rights.

I read this book without much of a foundation for the content except an interest in human rights, and especially rights for women.  I am no expert in this geographical region nor the culture within which most of this book takes place...but I was blown away.  My brain keeps churning and working out what I've read...finding places where the information fits and even places where the information replaces pre-conceived ideas or notions about change and how to facilitate growth in communities.
I would recommend this book for every woman but also men.  Just like the Sengalese village husbands, I think there are certain aspects of women that men just don't talk about...and as Molloy so effectively points out in However Long the Night, silence is a large part of the problem. 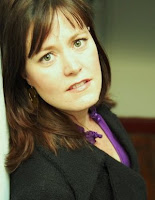