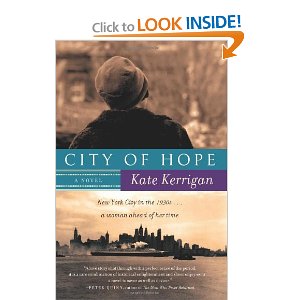 Source? the publisher via TLC Book Tours
FTC Disclosure: I received a complimentary copy of City of Hope from the publisher.  However, the review below and the opinions therein are my own and offered without bias.

Format? paperback
Cover? I liked it...I'm a sucker for an old timey cover and this one drew me in immediately.
Title? not sure...which city?

Why? Ever since I visited Ireland 2 years ago, I've been interested in anything I can get my hands on to learn more about its history.  I'm an American history fanatic as well, so City of Hope was a no brainer for me.

What Now?
I'd like to back up and read Ellis Island which is the first part of Ellie and John's story before the third book Land of Dreams is published in the U.S.

The blood poured down my stockings as I left the red trail of our newest child behind me on the church tiles. (3)

On every street corner there were men selling apples and oranges, out of bags set on makeshift stalls of cardboard boxes, baby carriages and wheelbarrows.  Many of them seemed to be burly Irish men, the size of day laborers, their faces broken with the shame of selling oranges at a dime a time to pitying passerby - one step away from begging. (108)

I had come to New York to escape my own problems and I had not been expecting to be confronted with the problems of others. (110)

Bridie's sharp tongue, Maureen's faith in her own skills, Anna's reticence in her own and Nancy's childlike vulnerability were sources of irritation to all of us.  For myself, I knew that I kept above much of the everyday bickering and, as such, was often seen as cold and aloof.  However, each of us had a part to play in the successful running of one another's lives, so tolerance and endurance usually won out. (155)

"You think that by being with him, you can either bury John for good or bring John back, Ellie.  You can't run from grief, Ellie - it'll find you.  Believe me, I know. (195)

Life in the Bronx during the Depression was, I had discovered, all about survival, and if you wanted to survive, you had to negotiate. (221)

"The girl was in trouble when she got here, and she'll surely be in trouble again after too long.  What that happens, we can only pray she has enough sense to find her way back here.  In the meantime we have to look after this little chap - he's the innocent one." (265)

Nobody belongs to anyone.  Everyone dies or grows up and leaves.  It amounts to the same thing: you are on your own, so you had better know who you are and what you want. (320)

Ellie leaves her Irish homeland and returns to New York after her husband John unexpectedly dies.  She finds that the New York of her past, the New York that almost took her away from John once before, is not the same and she must find a way to re-invent herself in order to truly figure out exactly who she is and her purpose in life without John.

The interesting and ironic complexities of life in Ireland and the United States before and after the Irish Civil War as well as The Great Depression.  Irish families who left their home country for America, fearing for their family's lives, found themselves thrown back into poverty after experiencing prosperity for a while.  Ellie travels back and forth during these times, and I couldn't help but get caught up in the politics.

the fight of the common man trying to keep his head above water in the United States with Roosevelt's New Deal politics, the formation of unions, and a mob run city...and especially the intermingling of all.

Bridie - what a character...on the surface a grumpy old woman...but deep down the best of the bunch.  Loyal, honest, outspoken, talented and practical. She reminded me of the Mrs. Pattmore character in Downton Abbey. My favorite Bridie episode is when they meet Frank Delaney when he comes looking for the mobster Dingus...who knew Bridie had that much guts??  LOVED it!

Ellie - I had a hard time getting on board with Ellie at first.  I couldn't help but think of her as selfish...her husband had already waited on her for 3 years while she ran away, the first year to earn money for him but after that?  Then, she came home and was still not satisfied.  It just felt as if all Ellie thought about was herself...nevermind that her actions and her life affected others as well. She leaves Ireland before her husband is in the ground, checks into the Plaza and goes shopping on Fifth Avenue, looking down her nose at families suffering from The Great Depression.  It took about 100 pages to realize she might be a worthy character after all.

Sheila - I never understand how Sheila and Ellie were friends.  Of course, I'm glad they were after all things transpired but still.  I wanted to slap Sheila on more than one occasion.

Charles - it will be interesting to see what role Charles plays, if any, in Ellis Island.

If you're in the least bit interested in this time period and the overlap of Irish history with that of America, you'll like this book.  Give Ellie a chance though...it really did take me a while to warm up to her.  By the end, my chest hurt and I thought I was going to cry.  We don't always get what we think we're supposed to have.  Sometimes life gets in the way.  That's what kind of story this is.