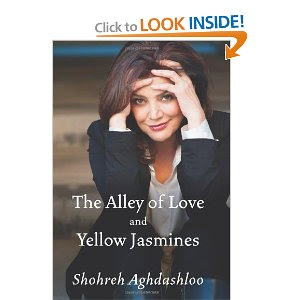 I received a complimentary copy of The Alley of Love and Yellow Jasmines from the publisher in exchange for an honest review.  However, the review below and the opinions therein are my own and offered without bias.

Title? 2 characteristics of Aghdashloo's homeland...a tribute the the Iran of her childhood.  Very nice.

Cover? Sadly, my review copy only had a proof cover :( I was very disappointed as I am a cover fiend.

What Now? I pulled House of Sand and Fog off my TBR shelf because I think it may have the depth I'm looking for in Aghdashloo's story.  Due to my own law, I won't see the movie until I read the book :p
I'm also going to watch the HBO series House of Saddam.

I am hesitant to include Golden Lines since my copy is a very unfinished copy, but here are three that stood out to me.

Then somebody threw the first brick, which was soon followed by hundreds of them. (104)

May once again the younger generation of Iran pass through the love alleys in the springtime, hand in hand, and recite poetry to each other beneath the heaving yellow jasmines on the walls, in a free society. (271)

Shohreh Aghdashloo grew up in Iran and lived there through the revolution of 1979.  Fleeing her homeland in pursuit of the freedoms that had been denied to her at home, she lived in the UK and then finally the U.S. sharing her story around the world through acting.

The reminder that freedom is precious...and that if we lose sight of its fragile nature, and continue to take it for granted and/or blindly follow any one individual or group, any nation can very quickly find itself under fire.

Much of what Aghdashloo's story is familiar to me.  The Iran/Iraq War was probably one of the first political  conflicts that I became aware of as a young person in the United States.  Aghdashloo's story did help me formulate more of a timeline of the years before the Revolution.

The writing - while Aghdashloo tells a story that needs to be told, the sentences are choppy and the descriptions are weak.  Many times I felt as if I was just getting the thin first layer of the story, for example,
Aghdashloo's brother's imprisonment, 9/11, the decisions and criticisms behind which stereotypical Iranian roles to play and not to play, why she felt like Kiefer Sutherland did not want her on the set of 24, her assumed snub by Renee Zellweger and Nicole Kidman at the Academy Awards, her decision to leave her husband behind in Iran, speaking on national television (CNN) if she was endangering her family, Pasha the German Shepherd? I was also left guessing why Aghdashloo even brought up some of the snippets she shared, particularly the one about Goldie Hawn, Vogue and Bardot?    I'm not making judgments, just asking a few of the many questions I had after I finished the 42 chapters, many of which were only a couple of pages long.

the author's purpose - by the end of the book Aghdashloo wrote about leaving Iran so that she could use acting as a way to bring light to her home country's injustices, but I didn't feel those were her intentions until the end.  In the beginning, I felt like Aghdashloo left Iran so she could act...period.  Not that it matters to me why she left Iran...the connections were just weak.  Some of these connections may very well have been made by the final published copy.  I just didn't fully understand a lot of what drove Aghdashloo's choices.  Because of my own stereotypical notions of actors, there were times I felt Aghdashloo was telling me more a story of Hollywood and her career rather that the evolution of her early life in Iran, and her later life as an Iranian outside of her home country.

All the left out parts - I enjoy reading the acknowledgments, the author's notes and photos...my copy had none of these :(:(

If you are already a fan of Shorheh Aghdashloo and are reading this book to learn more about her, I think you will be pleased.  If you are looking for a more in-depth discovery of growing up in a world you know as home that does not exist anymore (as is The Kite Runner), I don't think Aghdashloo will provide enough "meat" for you.