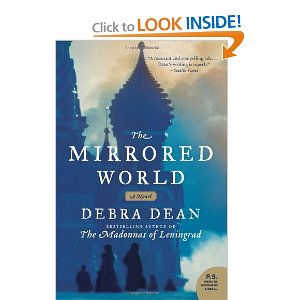 **FTC Disclaimer: I received a copy of The Mirrored World in exchange for a review.  However, the review below and the opinions therein are my own and offered without bias.

Title? a little confusing...and I'm sure my feeble brain is missing something very important
Cover? gray, blue and cold, women with their heads covered...a cold that you feel to your bones.  Yep, that's this story.

Why? Catherine the Great, Imperial Russia, and a woman named St. Xenia...I'm in.

What Now?  LOTS of Googling to do...and I really, really need to read Catherine the Great.

Because she was cruelly widowed and then prevented by the burdens of state from marrying the man she loved, it became a favorite sport of the Empress's to arrange the marriages of those beneath her.  And thus it was that she contrived to celebrate hr birthday and the end of the war with the Turks by marrying her jester to one of her maids. (16)

Tsar Peter had made it law that a girl could not be married without her consent, but it was a law observed mostly in the breach.  No good father would allow such an important decision as marriage to rest on the affectionate inclinations or disinclinations of a girl. (23)

Empress Elizabeth Petrovna's was the reign of song. (50)

Here the priest found his answer: this barrenness was God's punishment for her lust.  The act of fornication was evil, even between husband and wife.  The only justification for this act was the children that came from it; without them, the soul remained stained. (81)

I have heard it remarked by foreigners, in particular the English, that our mourning is a cacophony compared with their own more muted grief. (119)

"We have eaten today, and we shall eat again tomorrow." She said this just a child might, her face empty of any anxiety. (145)

Such radiance was not intended for mortals, and to achieve it, hundreds of boys were mutilated, made into monsters so that a few among the wounded might sing. (148)

Dasha tells the story of how Xenia and her sister, Nadya came to live with her family while their fathers fighting the Turks.  Dasha's father returns, but the sisters' father does not.  Brought up together, their focus is on making a good match and beginning their own families.  Xenia falls in love and is married to the man of her dreams until tragedy strikes and she is unable to bring herself out of her grief.  Known her entire life for being able to "see" things, she gives herself over to the world, much to the chagrin of the rest of her family.

Musical vocabulary, history, daily life and the importance of music in religion

Spirituality, culture, language and tradition - from marriages to funerals, the beginning of Lent to Easter, the birth of children, marriage contracts, the afterlife, you name it, there's symbolism and and

Names, names, and more names...I finally just started circling them all so I could go back and figure out who was who.  Who was in charge of what and who took what from whom?  I fully chalk this up to a lack of my background on Russian history and geography.

Xenia was a little over the top for me and I look forward to learning more about her legend.  She was incredibly emotional and was unable to pull herself out of her grief.  She also didn't seem to worry about those around her very much...of course, it all worked out fine and she very well may have "known" that it would, but it drove me crazy.  Much like Dasha, I wanted to throw the given away chamber pot on the floor and smash it into a billion pieces.

If you're the least bit interested in Russian history and culture, you won't regret picking up The Mirrored World.  If, like me, you don't have much of a background for the content, you'll still enjoy it, albeit a little slower possibly, and then The Mirrored World becomes a book you'll re-visit after you fill in some of the blanks for yourself.