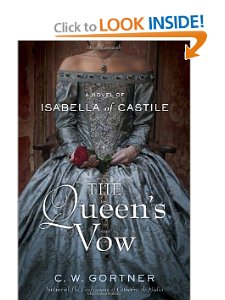 Format? paperback
Source? the publisher via Historical Fiction Virtual Book Tours
FTC Disclaimer: The publisher provided a complimentary copy of The Queen's Vow in exchange for an honest review.  The review below and the opinions therein are my own and offered without bias.

Title? Yep...makes sense...Isabella vowed to serve her country and keep its interests at the forefront of her life...and she did.
Cover?  Love it! Isabella was not a Barbie Doll...I appreciate a cover that doesn't try to make her look like one.

Why? I haven't read anything else about Isabella and I liked that this book was focused on her...not just her along with Ferdinand.  Not very often do we see their names separated.

What Now? I have so much more to learn!
It may also be time for me to watch the Showtime series The Borgias...anybody seen this?

"Though I'd been raised in a rural area where animals were regularly slaughtered for sustenance, it seemed un-natural to me to turn a creature's suffering into a crowd-pleasing spectacle. (51)

Our families shared Trastamara blood through our ancestors, but enmity and rapacity had led Castile and Aragon to wage war against each other for centuries. (58)

...if Enrique made a bastard his heir, it would be an affront to his divine right to rule.  He would divide the realm, anger the grandees, and invoke chaos.  He would invite God's wrath upon Castile - and upon all of us. (69)

"She's perfect," he whispered to me at night, when he snuck into my rooms, defying the prohibition that I must not receive him until I'd been churched, cleansed of the stain of childbirth by a priest's blessing. (190)

Therefore, while Fernando assumed charge of our military affairs that year, I undertook the diplomatic - suffering endless hours of penning letters until spots danced before my red-rimmed eyes and my fingertips bled. (198)

Cardenas nodded, clearly discomfited to be the bearer of this news.  "He told me that just as he raised Your Majesty to your current station, so will he take you down." (244)

"Few will support the defense of those deemed responsible for our Savior's crucifixion." (271)

"...We are building a new nation for a new age; it's what we dreamed of, all those years ago.  This is our time.  And once we purify Castile and Aragon, we'll turn our sword on Granada.  We'll take up the Reonquista and rid the land forever of the infidel." (298)

I first met the Genovese navigator in the monastery of Guadalupe in Extremadura, where we'd come to stay shortly after the New Year celebrations. (328)

"Fine," I conceded, "no armor.  It's too hot anyway.  Just a breastplate and sword," I added, "in case I should run into one of those mishaps you seem so concerned about." (337)

By royal command, every Jew who did not convert to the Catholic faith must leave (368).

Third in line to the throne of Castile, Isabella was never expected to rule.  However, rule she did, with Ferdinand of Aragon at her side.  A woman of strength and not just an adornment for her husband, Isabella relied on her staunch Catholic faith to guide everything she did and encouraged those around her to do the same.

Maps, family tree, discussion with the author about history vs fiction

A royal marriage that was actually happy...I couldn't help but wonder if Ferdinand and Isabella's marriage was successful because each was a monarch in his/her own right.  The power was equally divided via a prenuptial agreement which was designed to protect the interests of both Castile and Aragon but ended up also protecting the interests/responsibilities of the king and queen's peoples in order for them to be able to focus on each other.  That's my romantic notion of it anyway...even though I like to declare myself without a romantic bone in my body :/

Isabella's desire and work toward education for women.

A reminder that even though we like to heap criticism on Henry VIII, his lifetime and particularly the treatment of his wives, royalty were raised to believe that their rights were divinely appointed.  Personal happiness was not an option; they had been born to serve God and no one else.  If they had to cut down their own family members to protect God, then so be it.

The sad reality that even though theirs was a happy marriage, Fernando still fathered illegitimate children by other women.

Another sad reality that even a well loved queen spent much of her life defending her throne and/or trying to produce sons.

Because of their propensity to name their children the same names...for many generations, it is difficult to keep up sometimes with who's who when you go off on your own to learn more.  I never felt lost while reading Gortner's novel, but I did have to re-visit chapters to make sure I had all the Juanas, Alfonsos, Enriques, etc straight.

Those interested in the life of a strong queen who actually participated in her reign in other ways besides dressing, scheming and/or preparing herself for her husband's whims will enjoy this foray into the life of Isabella.  Gortner also provides the readeer with a detailed look into the history of Jewish persecution as well as that of early Muslims.


Friday, July 5
Review at Twisting the Lens
Review at Geri, the History Lady


Tuesday, July 16
Review at Book Nerds
Review at WTF Are you Reading?


Wednesday, July 17
Review at Book Addict Katie
Review at Always with a Book


Thursday, July 18
Review at Alternate Readality
Interview at WTF Are you Reading?


Wednesday, July 24
Review at Legacy of a Writer


Tuesday, July 30
Review at Long Ago Love
Review & Interview at The Life & Times of a Book Addict


Friday, August 2
Review at The Lit Bitch
Review at Amused by Books