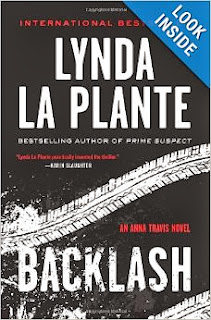 Source? the publisher via TLC Book Tours
**FTC Disclaimer - The publisher provided me a complimentary copy of Backlash.  However, the review below and the opinions therein are offered without bias.

Why? I'm a sucker for a series...a sucker, I tell you...especially when it involves a tough as nails, survivor female lead :)

What Now? I need to back up and read the rest of this series.  There were many times while reading Backlash that I wondered about people or times in Anna Travis's life that LaPlante mentions, but I never felt left out.  LaPlante offers just enough info so that the reader is curious about the other books but also won't have any problem following the narrative of this particular installment.

After keeping her waiting on the doorstep for five minutes, Langton buzzed her in; when she reached the front door of the flat it was ajar.  Someone had obviously cleared up as the main room was tidier than when she had been there previously.  Placing the groceries and vodka in the kitchen, which was also clear of dirty dishes, she called out, asking if he wanted her to make a coffee or tea.
"Just bring in the vodka and some ice," he called back. (100)

"If it's not a rude question, why are you playing with dollies over there? (152)

Henry Oates is caught in the middle of the night with a dead body in the back of his van.  What ensues after he's arrested is a cat and mouse trail of truth vs. lies to find out exactly what happened to the young woman in the van and 4 others like her, including a 13 year old.
Still reeling from grief DCI Anna Travis is called on the case by injured DCS James Langton. She's been assigned a new post in Cold Cases, but Langton knows she's got the goods to pull these cases together and put their psychopath away for good and give closure to the families of the dead girls.

Langton - I can't help it...he's a jackass...but I like DCI Langton.  He says what he wants, doesn't pretend anything, and does his job better than anybody.  He's also got a soft side for Anna even though he doesn't let anybody see it.

Anna Travis - even though the pining she expressed from time to time in Backlash didn't really fit her character to me, I still like Anna Travis's control over the situation.  She commands respect and gets it.  She isn't afraid to stand up for herself and demands others do their jobs as well as she does hers.  She isn't even afraid of Langton who can even make some of the men officers legs' shake.  The final scene with Travis and Langton is just about as emotionally perfect as possible...and so powerful that I even forgave her for being a little melancholy in Backlash.

There were times when the details became tedious...now, this is a police procedural so any reader would expect some of that...but it really felt slow at times.  I'm sure that's the way real police work happens unlike the CSI episodes another character's mother watches.

Anna Travis is a little whinier than I would have liked.  She runs into old lovers, sees their lives as fulfilled and hers as not.  Of course, she's still dealing with the grief associated with the death of her fiance', but it grated on my nerves a little and didn't really fit her character to me.

Henry Oates - evil is alive and well in this world.

If you like mystery/detective series with strong female leads partnered with just as strong male lead, both of whom are struggling with their demons, without the romantic distraction, this is the book for you.