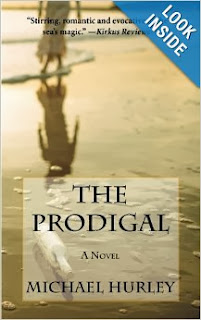 Why? A Gypsy legend, a Boston/New England, North Carolina coastal setting, with history and a mystery embedded...I'm in.

Title? Spectacular
Cover? Not exactly how I pictured it, but it will do.

I was reminded of? Beloved, The Mitford series, The Davinci Code, John Grisham novels...How's that for variety?

Michael Hurley has graciously offered one reader of Peppermint Ph.D a copy of The Prodigal.  Just leave your name, blog URL, and an email where I can contact you if you're interested.

Hurley has also dropped the price of The Prodigal in ebook format to $.99 for the remainder of the blog tour.

The damned are said to wander in a dimension that waits eternally between the sinking and the setting of the sun, while the saints of every age abide forever in that moment when the hope of darkness meets the dawn. (1)

This was Ocracoke - a hippie beach if ever there was one.  When they gave it National Seashore status, that disappointed the big hotel developers, delighted the skinny-dippers, and sealed its character permanently. (34)

"I need to get out of the practice, I know that now.  I'm surrendering my license to you - with my apologies.  The state bar can do with it what they wish." (92)

Molly McGregor was a good girl.  But she was also a practical girl, and nobody's fool. (115)

Farther Marcus - the man who had just breezed Aidan's chin with a blistering jab - seemed transfigured by the long, green chasuble he wore as he walked in the processional to the altar for the start of mass. He was fortunate to have this man's kindness, Aidan thought. (151)

The Cygnet was not the fugitive they had gone to sea to find, but she was the one who followed them home that day.  And though none of them knew it then, for her, in time, the fatted calf would be killed, and no expense spared to return her to the royal inheritance for which she was born. (195)

If the woman wanted aproval for paying attention to the readings at mass, she would get none from Marcus that evening.  He was off duty and in no mood for church chat with a bunch of uppity New York Episcopalians. (243)

Anyone who tried to sum up Rowdy Ponteau would say he was not much of a son to his father and not much of a friend to anyone else, but he had all the allies money could buy. (283)

Aidan Sharpe, successful trial attorney, makes an unforgivable error in the courtroom and is disbarred.  Through the kindness of his father figure/top partner in the law firm, Aidan is sent to Ocracoke Island to re-evaluate his life and what he envisions for his future.  A child of the sea himself, Aidan allows the water, the island, and its people to heal him.

The Writing - Oh. My. Goodness.  Hurley's prose, poetry, and lyrical vocabulary used to illustrate the lives of very normal people are a joy to read.  The Prodigal is one of those books that readers will love not just for the story, but also from the simple pleasure of reading.  I was reminded time and again as I read of the immensely satisfying experience of reading the written word.

Father Marcus - a priest like many in literature or theatre, who isn't the smooth operator with the perfect life, making the perfect choices.  A sinner, a Christian, a realist, a historian, and a sailor.  What an incredible combination!

Lt. Commander Gaylord Oliver Dempsey, former All-Navy - like all of the characters, Gay is powerful, real, fully developed, and the example of how bunches of money doesn't mean you have to be an ass.

The community, the acceptance, the skeletons in the closet...It's been a long time since I've read a novel that  made me literally yearn to move to the setting.  For a slower, more peaceful life, not boring, mind you, but peaceful, where all the trappings of the outside world don't matter.

Sailing and boat racing - I know nothing about either, but I never felt lost.  I could smell the ocean air, feel the wind on my face and the freeing emotional charge of sailing out to see.  I even found myself following the technical aspects of racing...and wished I had also grown up around the water and was as comfortable on a boat as Molly.

the Ponteau father and son, Reece and Rowdy - What is it about money that makes some people think they can do whatever they want, to whomever they want, whenever they want?  And, worst of all are parents who cover for their kids, no matter how despicable they are...I guess one despicable begets another despicable...Blech!

Read The Prodigal.  Enjoy the experience of the book as well as the story and the characters.  Allow yourself to be swept away; you'll be glad you did. 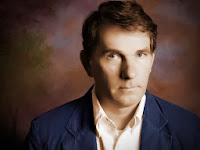