Buying In by Laura Hemphill - TLC Book Review and Giveaway 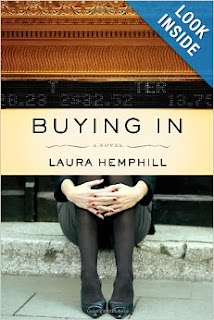 Source? the publisher via TLC Book Tours
**FTC Disclosure - The publisher provided me a complimentary copy of Buying In in exchange for an honest review.  The review below and the opinions therein are my own and offered without bias.

Why?  I'm an English teacher, so the life of Wall Street is totally almost out of my imaginable zone, but I'm curious about it at the same time...especially when the main character is a young, very intelligent, independent young woman, trying to make her way in the world.

I was reminded of? The Devil Wears Prada

What Now? the publisher is offering a copy of Buying In for one reader of Peppermint Ph.D.  Leave your name, blog name, and email address in the Comments section, and I'll announce a winner next week.  I'm a little behind on giveaways, so next Monday I'll announce winners for Buying In as well as several of my past reviews.  Get in on the action while you still can :)

Ethan slid his markup across the table.  "Finish the presentations by 5 a.m.  Leave them here.  I'll pick them up before my flight.  I want both of you at your desks, queued up, 8 a.m. In case we need to run any analysis on the fly."  Ethan rose, fastening the top button of his suit jacket with a quick flick of his thumb and index finger: they were dismissed. (5)

Mergers are like marriages: only one spouse can be depressed.  (41)

Little Prince Sinclair had been trying to poach AlumiCorp from Morgan Stanley for years, but it was Ethan, the state-school kid from High Point, North Carolina, the son of an assembly-line worker, who bagged the suckers. (87)

Cho made a frustrated noise, like a car grinding its gears.  "This isn't summer camp.  You're going to make enemies no matter what.  It's an occupational hazard.  Besides, who doesn't want a worthy adversary?" (157)

"When you started at Sterling," he said, "you laughed at the banker boys.  Now you're a poster child for that place." (193)

Come on, Camille, how urgent can it really be?...Coming home not isn't an option...Well you'll just have to sit tight. (223)

Jobs were like a religion: the only people who understood were the ones on the inside with you. (271)

Sophie Landgraf is a small town girl living in NYC, trying out her wings on Wall Street.  She knows the business and has the smarts, but she's got a lot to learn about saaviness.  Her job takes a toll on many of her personal relationships, and Sophie struggles to find some balance.  However, at the same time she craves balance, she very easily gets lost in the highs of "making the deal."  If she's going to survive Wall Street, she's got to learn to compartmentalize and ride the wave...or drown and go home.

Ethan Pierce - at first when he launched into Sophie heartlessly about her suggestion, I thought, "What a jerk!"  But, it didn't take me long to get past that.  Hemphill cleverly makes sure we know enough about Ethan to humanize him.  Not enough to root for him in any stretch of the imagination, but just enough to "get" him.

I appreciated Hemphill's dual perspective on Sophie's life choices.  Her father, Will, and even her closest childhood friends couldn't see why it was necessary for Sophie to keep punishing herself (and them) by working at Sterling.  But, even though the work was brutal, Sophie fed on it...even liked it.  She needed the numbers and the reality checks of the business world.  While I cannot even imagine this kind of job (I would be a basketcase), Hemphill reminds us that different people thrive on different things.

Sophie's relationship with Ethan - I can't say much here bc I don't want to spoil one of the major "keep your attention" and "keep you guessing" tactics.  But, I kept my fingers crossed that this relationship would go the way I wanted it to.  I felt if Hemphill decided to go one way with this part of the story, it would completely undermine the bigger story.  Is that vague enough?  I could hug Hemphill for not copping out where this relationship was concerned.

Nancy Cho - straightforward, brutal, but a good friend for Sophie.

Alternating perspectives - I really like this writing format; I seem to always want to know everything about everybody, and alternating narratives seem to give me just what I need.

Some of the technical language...the aluminum business, smelters, marketing and finance speak, was confusing to me...I sometimes had to just skim past it.

Sophie's habit of sneaking into offices and looking in drawers freaked me out...my heart pounded each time she did it.  A very weird characteristic indeed for someone who was so intent on succeeding in big business and most of all, not getting fired.

Will - no offense, Will, but geez, dude, as much as I understood your way of life more than Sophie's, you simply wanted her to be what you wanted her to be...and that's never a good thing.

If you've ever wondered what it would be like to live in NYC and work in big business, whether you can actually imagine yourself doing just that or not, I think you'll like this book.  Hemphill provides just enough detail about the characters to make you fall for them even if you're not a big city person.