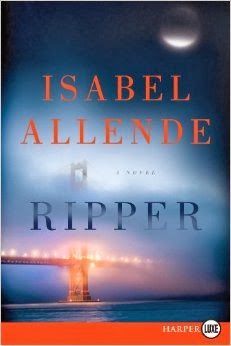 **FTC Disclosure - The publisher provided a complimentary copy of Ripper for an honest review.  The review below and the opinions therein are my own and offered without bias.

Why?  My first Isabel Allende book was Maya's Notebook, and I loved it!

"Your homework for the next week is to come up with theories about the case," the games master said before signing off.  "You all know the drill: motive, means, opportunity, suspects, method." (133)

In my line of work, he thought, I've seen too many horrors to harbor any illusions about human beings: they're capable of the worst atrocities. (190)

She climbed into the seat between him and Attila, who never gave up his window seat for anyone. (192)

The deputy chief had no wish to see Elsa's son behind bars, to see him joinn the 2.2 milliion convicts in America - a higher number than in any other country, including the worst dictatorships, making up 25 percent of the world's prison population: a nation imprisoned within a nation. (214)

Attila delightedly sniffed the combination of essential oils that pervaded the apartment.  The dog hated artificial smells but was a sucker for natural aromas, which explained his fondness for Indiana, whom he cherished among human beings. (241)

Ryan moves in front, flanked by Attila.  The dog is kitted out with a bulletproof jacket, goggles, headphones for receiving orders, and a camera mounted on his head, streaming images back to base.  Attila is still a frisky pup - but when his service harness is strapped on, he becomes an armor-plated, almost mythical beast.  (262)

"I don't know what's wrong with me, Pedro.  I used to be able to keep a cool head under machine-gun fire, and now a five-minute spat leaves me with a blinding headache." (326)

Until now, as Amanda kept him informed of the discoveries she and the other Ripper players had made, her father had simply dismissed this as five kids and an old man playing online games, until finally - reluctantly he had to agree that they were right.  The bloody murders plaguing San Francisco were the work of a serial killer. (340)

And he hated himself, as he looked at the photos, for not having loved and looked after her the way she deserved, for having blown his chance to make a loving home for her where Amanda would have flourished. (379)

The Jackson women, Indiana and Amanda, have always had each other. Yet, while their bond is strong, mother and daughter are as different as night and day. Indiana, a beautiful holistic healer, is a free-spirited bohemian. Long divorced from Amanda’s father, she’s reluctant to settle down with either of the men who want her—Alan, the wealthy scion of one of San Francisco’s elite families, and Ryan, an enigmatic, scarred former Navy SEAL.
While her mom looks for the good in people, Amanda is fascinated by the dark side of human nature, like her father, the SFPD’s Deputy Chief of Homicide. Brilliant and introverted, the MIT-bound high school senior is a natural-born sleuth addicted to crime novels and Ripper, the online mystery game she plays with her beloved grandfather and friends around the world.
When a string of strange murders occurs across the city, Amanda plunges into her own investigation, discovering, before the police do, that the deaths may be connected. But the case becomes all too personal when Indiana suddenly vanishes. Could her mother’s disappearance be linked to the serial killer? Now, with her mother’s life on the line, the young detective must solve the most complex mystery she’s ever faced before it’s too late.

Indiana and Amanda - different as night and day, but melded together with a love that only a mother and daughter can appreciate.

Family - from Bob's extended family to Indiana's father, the godmother, the fierce protection of each other despite their personal issues and shortcomings, these people loved each other to the core...and stuck it out through the end.

Bob and Indiana - While their relationship as husband and wife didn't work (and couldn't work), they've found a way to co-exist and still honestly care for each other.  How many times do we see this?

The realistic way the character Ryan Miller is portrayed...Indiana's relationship with Ryan could have very easily turned into some kind of sappy romance...but it doesn't.  And, that's the way it should be.

The ending made me cry...I can't tell you why, of course, but it's very emotional...and right.

I wasn't crazy about the character Ayani...I felt she wasn't developed enough...the reader is given a lot of background for her, and it seemed as if she would play a major role...and then she didn't.  That confused me a bit.

I never really got into the online Ripper game...don't get me wrong; I still really enjoyed this book and this part of the premise, but I wanted to know these characters more in depth as well.  I still felt like they were strangers to me by the end of the book.

Allen Keller - really, Indiana?   As much as I disliked Allen, I despised his family.

Ripper is a murder mystery with depth and social, political, and familial consequences.  If you like a little thought along with your mysteries, then you'll enjoy this one. 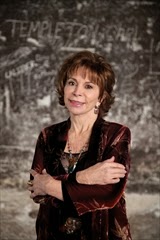