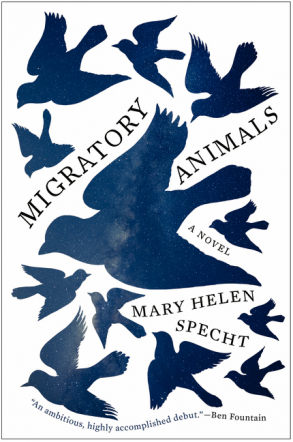 
When Flannery, a young scientist, is forced to return to Austin after five years of research in Nigeria, she becomes torn between her two homes. Having left behind her loving fiancé without knowing when she will return, Flannery learns that her sister, Molly, has begun to show signs of the genetic disease that slowly killed their mother.
As their close-knit circle of friends struggles with Molly’s diagnosis, Flannery must grapple with what her future will hold: love and the pursuit of scientific discovery in West Africa, or the pull of a life surrounded by old friends, the comfort of an old flame, family obligations, and the home she’s always known. But she is not the only one wrestling with uncertainty. Since their college days, all of her friends have faced unexpected challenges that make them reevaluate the lives they’d always planned for themselves.
A mesmerizing debut from an exciting young writer, Migratory Animals is a moving, thought-provoking novel, told from shifting viewpoints, about the meaning of home and what we owe each other—and ourselves.

Mary Helen Specht’s work has appeared in numerous publications, including the New York Times and Colorado Review. A winner of the Richard Yates Short Story Award, among other prizes, she is a former Fulbright Scholar to Nigeria and Dobie-Paisano Writing Fellow. She earned an MFA in fiction from Emerson College and now teaches creative writing at St. Edward’s University in Austin, Texas.

On the night before her flight, Kunle took her in search of fresh palm wine. (3)

Alyce closed her eyes. "And there are still boxes to unpack.  Food to buy.  Dishes to wash." Breaths to breathe, she thought.  "Have you noticed how we buy food and then eat it, and then have to buy more." (13)

Their parents never told Molly to be a tough cookie.  They indulged and protected her and stroked her hair at night because they already knew. (39)

Molly was dying, and it seemed she was the last to know. (81)

"I hear another white person convinced they're going to save Africa from itself." (189)

The two women looked at each other.  Nothing shocked Alyce anymore.  She sipped and then nodded. (172)

Alyce felt guilty standing there in the water, holding the hand of her best friend's sister as if she were about to baptize her in the creek.  Who had betrayed whom?  How was this supposed to go?  Red Rover, Red Rover, why don't you come over? (248)

Flannery - I liked Flannery's independence.  She was almost independent in what some would say was selfish...but isn't that at least in part of what independence is?

The irony of Alyce's tapestry...made to give her sons something to remember her by...but a healing journey in the end.

A glimpse into Nigerian geography, culture, and history.

The strength in both Molly and Alyce that blooms when they are together.

Kunle - he was the only male character that I liked...I especially appreciated the way he called BS on Flannery if it needed to be called.  Their relationship seemed real.

Molly's parents...seriously?  Who makes that kind of decision?  And Brandon?  How do you keep that kind of info from someone?  Parents maybe...but a husband?

Most of the male characters...I don't know; they just seemed sortof weak.  Is it not possible to have strong female characters and male characters at the same time? Does one have to be weak so the other can be strong?  Santiago was my least favorite.

The End - I felt like Migratory Birds just stopped.  Just ended.  I've never been one for nicely wrapped packages, but gracious, there was so much more to be said.

The technicality of Flan and Brandon's research.  The content was so out of my area that I found myself having to skim some of science.  I just couldn't follow.

The huge jump in time from Molly's pregnancy to the baby's birth...everything had been so detailed up to that point.