The Fire By Night by Teresa Messineo - TLC Book Review 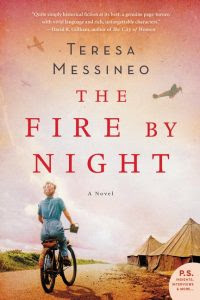 The Fire By Night  by Teresa Messineo

Source? provided by the publisher via TLC Book Tours in exchange for an honest review.

Why?  I love working with TLC, and I love historical fiction

Title? the title is taken from a verse in Exodus...just follow the light...I wasn't sure how the title fit until writing this review.  The light at the end of the tunnel...the light of hope...the light as a beacon...the Lord leading the Americans to find the prisoners.
Cover?  I had mixed feelings about the cover.  While there are planes in the sky, the nurse is nonchalantly biking down what almost looks like an asphalt sidewalk with a lunchpail in her hand.  The sky is hazy...so I'm assuming the planes are dropping things...I'm not sure why she would just be calmly riding her bike.  I'm still pondering this.

What Now?  I want to know everything I can get my hands on about nurses in WWII who were not supposed to see combat but saw it anyway and then were sworn to secrecy after the war was over.
My mind has been blown.

"War is the punishment for sin, Sister," she had said from memory, along with a hundred other pat answers.  Punishment for sin.  What colossal sin had some fool committed for this to be its outcome? (23)

The U.S. Army Corps of Engineers had constructed the whole nightmarish labyrinth, never imagining for a moment that this wraith of a woman would be flitting around it in the dark, awaiting her own death in the morning; never imagining that a storage bunker they constructed would become the last bastion of freedom... (40)

Not now, Kay pleaded with herself.  Stop remembering. Stop thinking. (93)

The baby kept crying, and the sound kept Kay alive.  It was as if he were screaming and crying and speaking out on her behalf, on behalf of them all... (103)

America was pulling out, dragged down by eight thousand bloodied soldiers pulling at her pant cuffs, slowing down her retreat. (141)

Maybe God was in the emptiness, in the cold and pain and despair.  Maybe finding Him there would be faith. Maybe even imagining He could be there was hope. (160)

We'll be together again, after all this time.  We will be strong again together - just as we had to learn to be strong apart. (291)

"...if the world of men ever tears itself apart again, it will take an army of nurses to put it back together." (294)

Jo and Kay.  An unlikely friendship in an unlikely environment.
An enlisted sorority that became a fight for survival.
A story that hasn't been heard but oh so desperately needs to be heard.
For 65 years their stories were stifled because no one must ever know of the horrors experienced by WWII nurses who saw just as much combat if not more than their fellow male soldiers.
Their lives were changed in ways they never could have guessed.
They would never be the same again.
This is their story...and gracious what a story.

Jo and Kay - two of the best female protagonist I've read in a long time.

The vividness of the description...I could see the blood splattering...the dirt flying...the shocking events happening...without any time to adjust and readjust...how in the world these women kept their wits, I'll never know.  They are a testament to the spirit, strength, and survivorship of women.

The relationships...I don't have words for this depth...I can only imagine the kind of relationship formed when your lives are at stake...literally...you can see the enemy coming...over and over again.

Suicide and PTSD awareness - when you finish The Fire by Night, if you've ever wondered why so many soldiers struggle when they return home, you won't wonder anymore.
"shell shock"
"battle fatigue"

Messineo weaves Jo and Kay's stories together separately...she also weaves their individual lives (the soldier and the woman) together separately.  I'm not sure I even have the words to describe how well Messineo does this.  I think this strategy is why Jo and Kay are so believable and likable...I walked away from The Fire by Night feeling as if I know these women...that their tragedies are mine via knowing them...as if they were my grandmothers or another long lost connection.

Aaron and David, the men
Admidst all the hate, the war, the tragedy, there was still good.

The importance of knowing the reality of war.  I think this is really an important point in our current time. Every generation away from history becomes more and more ready to carry our country's flag into war.  Do the people yelling and screaming for war even really understand what it is they are asking for?
I don't think so.


Jonesy - what a sweetheart

Father Hook - his story made me cry.

Messineo adds in just enough of Jo and Kay's "normal" life to hold things together...to keep me reading...to see the hope in the future amidst all the pain and suffering of war.
I was also very thankful for the glimpse into Kay and Jo's lives after the war, both personal and still navigating the military as more truths are told.

The sexist behavior of many of the men in this story, and of the system itself.

The fact that this story has been hidden.  About midway through The Fire by Night, I stopped reading and started Googling, convinced that Messineo was over-dramatizing what had possibly happened to female nurses in WWII...I never heard about this in history class or even since...and I'm one of those geeks who loves to read and learn.  It didn't take me long to realize that Messineo wasn't dramatizing one bit. Not one bit.
Then I got mad.

I want every American woman in the world to read The Fire by Night.  I'm appalled that there is so much of our history missing from everything we ever learn in school.  History can't die if we don't let it.