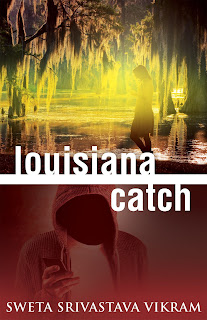 Ahana, a wealthy thirty-three-year-old New Delhi woman, flees the pain of her mother’s death, and her dark past, by accepting a huge project in New Orleans, where she’ll coordinate an Annual Conference to raise awareness of violence against women. Her half-Indian, half-Irish colleague and public relations guru, Rohan Brady, who helps Ahana develop her online presence, offends her prim sensibilities with his raunchy humor. She is convinced that he’s a womanizer. Meanwhile, she seeks relief from her pain in an online support group, where she makes a good friend: the mercurial Jay Dubois, who is also grieving the loss of his mother. Her work in the U.S. and the online medium bring the two men into her life, and Ahana learns that neither is what he seems. With their differing sensibilities on a collision course, Ahana finds herself in a dangerous situation—and she discovers a side of herself that she never realized she had.
Louisiana Catch is an emotionally immersive novel about identity, shame, and who we project ourselves to be in the world. It’s a book about Ahana’s unreliable instincts and her ongoing battle to determine whom to place her trust in as she, Rohan, and Jay shed layers of their identities.
As Ahana matures from a victim of domestic sexual abuse into a global feminist leader, she must confront her issues, both with the men in her life and, ultimately, with her own instincts. Whom can she rely on to have her best interests at heart?
Praise
“This book will be a welcome addition to modern-day discussions of women’s rights, multiculturalism, and online technologies.” ~ New York Journal of Books
“Raw, real, and profoundly moving, this is a very fine novel that begs for continuation in the form of a series. Sweta’s honors are well earned.” ~ San Francisco Review of Books
“Louisiana Catch, by Sweta Srivastava Vikram,is an emotionally immersive novel about identity, shame, and who we project ourselves to be in the world. An extraordinary and entertaining read from cover to cover, Louisiana Catch is unreservedly recommended.” ~ Midwest Review
My Take

Talk about perfect timing.
Louisiana Catch is the kind of story that hits you deep if you've ever experienced any form of sexual assault whatsoever.  Even when I thought I had dealt with every possible emotion dealing with the crazy political atmosphere we've all been living in lately, I never even considered women who are essentially held hostage in their own homes by husbands who rape them.
While Vikram focuses more on Ahana's recovery process (from the abuse as well as her mother's death) rather than the horrible details of her married life, the reader sees just enough to feel dirty herself.
The evil of Ahana's ex-husband is contrasted by the goodness of another male character in this story.  I was worried that he would be too good to be true, but Vikram shows his faults and shows the complications of accepted behavior (comments, innuendo from men who mean no harm).  The behavior is complicated from both Ahana and this character's viewpoint.  With the number of women in the world who have dealt with sexual assault, I think this is an important theme.  There are lots of "good" men out there; it's important that they consider that at least one woman they meet in their lifetime will have been a victim at some point in her life, and he will need to "tone it down" a notch.  Or, for heaven's sake...listen to her and watch for cues...and gracious me, respond to those actual hints! ;)
The building of this new relationship shows the frustrations as well as the difficulty in learning to trust again.  Some people might see Ahana's behavior here a bit tedious...but I felt it was spot on from what I know of sexual assault victims.
The "evil" in the story is creepy as hell.
Ahana's need to directly deal with it worried me some, and I wasn't sure at first if that was a realistic take...but in the end, I could see that her actions with this character were spot on for a woman who is determined to take back control of her life...the backwards and forward movement...the mistakes...they naivety...etc.

I fell in love with Ahana's family...her Mumma, Aunt Chutney, Masi, Naina, and even housekeeper Lakshmi...to be surrounded by so much love, and wow, what a dip into Indian culture.   I loved the way Vikram slipped Indian words within the story...using enough context that after a while, even if I didn't exactly know what the words meant, I could figure out the connotation.

The geography of Louisiana Catch spans not only New Orleans, but also New York City and New Delhi.  Vikram's details took me to those places!

Louisiana Catch is a solid read with an extra sprinkling of yoga and meditation as well.
It's a thriller in many ways, that doesn't leave you with a nicely wrapped ending, but an important read.
These are stories and conversations that are long overdue.

In that moment, I understood what Mumma meant by "Forgive yourself, beta; grow from your experiences.  Know that you are more than your scars.  Believe that you deserve love." (251) 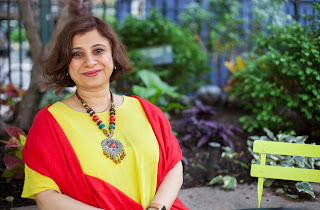 Sweta Srivastava Vikram (www.swetavikram.com), featured by Asian Fusion as “one of the most influential Asians of our time,” is a best-selling author of 12 books, five-times Pushcart Prize nominee, coach, holistic wellness entrepreneur, and a certified yoga & Ayurveda counselor who helps people lead creative, productive, and healthier lives.
Louisiana Catch (Modern History Press 2018) is her debut U.S. novel. It’s the #1 new release on Amazon under women’s divorce fiction and featured on U.K.’s list of “Books to Read in 2018.” Sweta won Voices of the Year Award, past recipients of which have been Chelsea Clinton, for her work with Louisiana Catch and her tireless support of women who have experienced sexual assault and abuse.
Born in India, Sweta spent her formative years between the Indian Himalayas, North Africa, and the United States collecting and sharing stories. She writes hopeful stories about multiculturalism and women’s issues with a healthy dose of suspense, reflection, wellness, and food. Sweta, whose work has appeared in The New York Times, amongst other publications, across nine countries on three continents, is an award-winning writer and graduate of Columbia University.
She lives in New York City with her husband and in her spare time, teaches yoga to female survivors of rape and domestic violence.