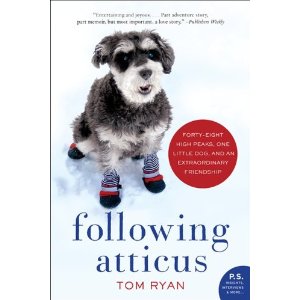 Source - TLC Book Tours - ***While I was provided a complimentary copy of Following Atticus from the publisher via TLC Book Tours, the opinions expressed below are my own.
Why? If you've been around my blog even just a time or two, you can't have missed the fact that I love animals.  I've been around animals all my life and truly enjoy their companionship, variety of personalities and the experiences they have all added to my life.  Two dogs have affected my life more than any others, Honey (Chow Chow) and Layla (German Shepherd).  "Saving" them actually "saved" me more.  Offer me a story about an animal who touches a person's life so deeply and I'm all over it.

What Now?  Boy, is this one ever a keeper...not just for the story but also the writing.  Tom Ryan embeds classical literature and naturalistic poetry of Twain, Frost, Thoreau, Emerson, Whitman and others within his descriptive narrative of his life changing adventures with his little dog with the big spirit, Atticus.  I'll also be joining Tom and Atticus's Facebook page so that I can keep up with them even more :)

I knew the moment I looked from Atticus to the surrounding mountains that I'd never forget that day.  My life had changed.

The basic process of climbing a moutain was therapeutic, almost cathartic.  There was the simple act of walking into the woods and away from the world.  Then there was the climb itself, where the body worked: muscles flexed and released, lungs rose and fell, the heart beat.  It was as if the complications of my life were breaking down and the only thing I cared about was the next place I'd put my foot or finding something to hold to pull myself up.

There is a point in climbing when you get quiet and are enveloped by the solitude.  The hike turns into a walking meditation and becomes Zen-like.  You stop trying so hard, and your stride falls into place with your heart and lungs.  Your mind follows suit.

As much as people worried about me, the way I saw it, I had an advantage over most.  There were many days where I might have hiked if I were on my own, but I wouldn't expose Atticus to storms, high winds, frigid temperatures, or trailes that were icy or too deep with new snow to make our way through.   Be refusing to subject Atticus to less-than-favorable conditions, I kept myself safe.

The journey across the Carters and the 'Cats was more than fifteen miles long, with six thousand feet of elevation gain - at truly rugged test.  In the end, however, it didn't seem like that big of a deal considering all those people we were walking for, the people who loved them, the battles fought, lost, and won, and what they'd been through.

Life is funny.  I set out to be nothing like the man I both loved and disliked, but I ended up becoming a newspaperman, reading the same authors he admired, becoming a big political fish in a little pond, and even climbing his mountains.  Somewhere in my efforts to get as far away from my father as possible, I had adopted his dreams as my own.  I had become his son.

It's the natural world that heals the soul.
Summary

As editor of the indpendently owned newspaper, the Undertoad, Tom Ryan exposed small town politics for what it truly was, underhanded and sneaky.  In  Newburyport, Massachusetts his editorial style won him many friends but also some pretty serious enemies.
Floundering alone in life, trying to come to terms with a less than ideal childhood, the premature death of his mother, a loveless relationship with his father, and the death of a close friend from cancer, Tom Ryan accidentally begins to discover himself and the joys in life through first an aged and homeless Miniature Schnauzer named Max, later his own puppy Atticus and the White Mountains of New Hampshire.

While Tom Ryan's journey is a spiritual one, he doesn't leave anyone out by pinpointing a specific religious belief as the impetus for his journey.  Ryan is still working some of his beliefs out, but the way he handles faith opens his story up to many, including those with strong beliefs already intact as well as those who are searching or don't even realize they are searching.

Atticus wears Muttluks and a K9 Top Coat while hiking higher up in the mountains once the temperature dropped.  While I'm well aware of companies that keep our dogs in gear for camping and traveling, the idea that there is enough need for heavy hiking gear for dogs made me smile.  I know people who don't like dogs and/or afraid of them...Atticus's adventures and the venues, vets, friends who look after him simply reinforce for me the love dogs bring us.  I'm even more convinced that those who don't have dogs are really missing out on something special.

Of course, there's dog stuff to learn in Ryan's book.  One of the most interesting tidbits happened when Tom and Atticus plowed through some serious wind and snow.  Instead of just hunkering down and waiting things out, Tom had to keep going...while Tom's body could keep itself warm for a while, Atticus's small body would freeze if he sat still for too long...how bout that for an impetus for peseverence?  I also liked the fact that Atticus's breeder recommended that Tom take Atticus everywhere he went during the first month.  I liked this for the simple fact that some people believe that dogs are either good or bad, and while Atticus is indeed a very special dog, Tom Ryan devoted some serious time to him in the beginning, took time to understand him, didn't try to turn him into something he was not, and worked WITH him consistently and lovingly.  It's important for readers to understand that they can't just go get a Miniature Schnauzer or any other kind of dog and expect him to be an Atticus.

The photos of Atticus are a perfect addition to Tom Ryan's written descriptions of his "Little Buddha." Atticus always seemed to know the way, never questioned whether or not to press on and always remembered to stop at the summit and take in the breathtaking views from the top.

Both Atticus and Tom Ryan experience trials throughout the narrative...things are never "hunky dory" nor made to seem that way.  Thank goodness for that because a life that has no challenges or turns out all rosy with a few quick fixes is a lie.

I'm not a mountain climber, but I never felt left out on Tom and Atticus's hikes.  The descriptions of the various mountains, their trails, the markers, the ground cover, the weather, the equipment, the adjustments and eventually the summits made me feel as if I was right there with them.

Not only does Tom discover his own self through hiking with Atticus, but he also learns to give back.  Through his Winter Quest for a cure and the 2nd Winter Quest for Angell Animal Medical Center, Tom and Atticus are able to share their joy

What I Didn't Like
Honestly, there wasn't really anything I disliked about this book.  If I had to choose one thing, one time that I was confused a little, it would be the first chapter.  The first chapter is about Atticus's predecessor, Max.  I didn't really see the connections of Max at first and wondered why the author spent the first couple of chapters writing about a dog that wasn't the focus of the book.  Once I finished, however, I realized that it's necessary for the reader to connect with Tom Ryan, where he was in his life when he accidentally got Max, Max's effect on his life and his subsequent decision to get Atticus in order to bring the story full swing.

Atticus has a couple of pretty serious challenges...and these parts are sad and made my heartbeat speed up as if I was climbing the mountains myself...I won't say more about these bc of spoilers but both Tom and Atticus's attitudes toward serious setbacks are enough on their own to make readers think twice about giving up when the going gets rough.

While dog lovers will certainly appreciate this books as much as I did, I believe nature lovers, particularly those who love the woods, mountains, etc, including walkers, hikers, and runners will appreciate Ryan's spiritual journey as he hikes the peaks of the White Mountains with his best buddy Atticus. 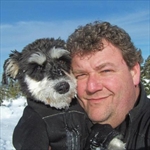