Book Review - Things Your Dog Doesn't Want You to Know 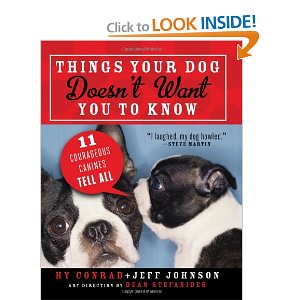 Things Your Dog Doesn't Want You to Know by Hy Conrad and Jeff Johnson
Sourcebooks, 2012

Why? I'm such a dog lover...and this one seemed like a no-brainer for me

Cover? Two dogs, one whispering into the other one's ear, insinuates dogs telling each other secrets.  But, the theme of the book is dogs telling humans what it's like to be dogs...the cover is a little misleading.

Title?  Again, a little misleading...in the book, the dogs are all talking to humans through open letters on a variety of subjects...if the dogs didn't want the humans to know, then why did they write (or dictate) letters to them?

What Now?  I'm happy to pass this one along to another blogger who'd like to give it a whirl :) I'll keep this giveaway open for two weeks :) Please put your email and blog address in the comments section.

Axelrod - Yellow Lab and family dog - Thor from next door says this patch of ground is called an herb garden, just like the one in your bathroom.  I've been peeing on it three or four times a day, mostly on the leafy things you put in your salads.  I hope that's okay.

Orson - the English Bulldog who obsesses over food - I don't see you being forced to shake hands before you get a snack.  Okay, sure, I'll still shake hands.  It just seems like a double standard.

Sophie - older Cocker Spaniel - So we came to this kind of compromise, the kind where you don't know it's a compromise and I try to time out just how long your patience is.  I'll sniff around and squat a few times and keep walking.  And you'll keep your eye on my rear end like it's some kind of wrapped-up birthday present.

Tinkerbell - high maintenance Chihuahua - Brianna, sweetie.  I know why you do it, pretending that I can talk human.  You imitate my voice and say idiotic things in this high-pitched squeal.  You think it's funny.  And, you're very right, it could be funny.  Hilarious.  But it's not.

Bandana - Border Collie - What would I do if I ever caught a car?  I know you're thinking that too, and it's a fair question.  I don't know.  What would you do if you got to the end of that walking machine?  It's not going to happen, is it?  And I'm not going to catch that car.

Charlie - Miniature Schnauzer - Sure, not all growls are the same.  Buster specializes in the scary attack thing.  He'll put his ears forward and curl his lips and growl deep with his mouth almost closed.  Sometimes this is mean.  And sometimes he's just playing his ventriloquist joke with Snowball.  We play along.  "Look, Snowball is angry.  Ooh, we're scared."  Cracks us up.

Moonbeam - Mixed breed owned by a flower child - Killing seems natural to me.  For example, I love chasing pigeons.  And it's not because we're playing tag.  Look at my favorite toy, the squeaky squirrel.  it's made to look like a squirrel.  I track it across the lawn and attack.  And those squeaks add to the fun, especially when I get them going fast, like he's in a crazy panic.  And then I stop.  And the squirrel stops squeaking.  Doesn't get any better than that.

Sarge - German Shepherd who moves from job to job to job - Just last weekend, the Bosses had a pool party.  It was all fun and games for them.  But did they realize that there was another dog half a mile away?  Did they notice that the wind changed direction fifteen times?  Or that a big family of bunnies was thinking of crossing the lawn before I stopped them?  I didn't think so.

11 dogs write short snippets of their lives and just what it means to be their kind of dog living with their kinds of families in their kinds of neighborhoods, apartment buildings, etc.  A few of the important questions answered include "Why Do We Dig?" "Why Do I Eat Grass?" and "Why Do I Like You?" and a few "secrets" revealed include "I can poop the second I start my walk," "The reason I ate the sofa," and
"Why I Chase Cars."

Tinkerbell - my least favorite breed in this book (Chihuahua) became a welcome laugh when I turned the page and saw her face next :)  She never disappointed me.

Bandana - the Border Collie -a smart working dog for sure and one that's as bright and intelligent as can be when trained.  Can you tell I've owned two of these before in my lifetime?  And, I've observed several others at work with sheep and cows.  These are the sharpest and quickest witted dogs a person can find, and I thought the authors portrayed Bandana's quick mind spot on.  I chuckled several times because I recognized the dogs of my past in Bandana.

Sarge - my favorite breed in this book (German Shepherd) just wasn't portrayed as well as I thought.  GSD's are some of the smartest dogs on the planet...hence their use in the military, police forces, etc.  Sarge was portrayed to some extent as if he was kind of a bumbler.  That made me sad.
***Full Disclosure here - I am a GSD owner and lover...so there's no doubt in my mind that I am biased on this point.

I'm all about spay and neuter...and while there are several jokes about dogs having their "balls cut off," the jokes/chapters about the dogs in heat just weren't funny to me.  A female dog's heat cycle isn't a pleasurable experience for her at all, and she shouldn't even have to go through it once.  There are enough animals in this world without homes without perpetuating the mythology of dog sexuality.  Sorry, but this was a sore spot for me.

Over-use of the word "fart"...I'm sorry; I just don't like this word...never have :( I realize dogs do just this all the time...remember I own 3 of them...but that's not the word we use to describe that particular body function.  Toot or poot works just fine for us.
Ahem.

Moonbeam's owner is a free spirit who seems to readily medicate her dog with herbs and concoctions that are downright dangerous.   I didn't find this funny at all either :(

Dog lovers only for this one...and it seems probably the more urban dog owners for this one since the examples are a little on the "city" side.  Rufus T, for example, is a Bloodhound.  In the rural South (where I'm from) a Bloodhound is anything but the circus performer wannabe that Rufus T is portrayed as.  I can only assume that Bloodhounds are seen through a very different lens in other parts of the country.