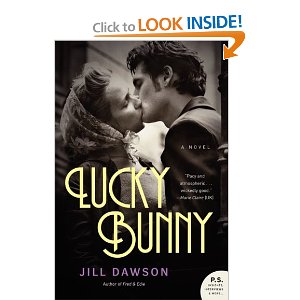 Source? Publisher via TLC Book Tours
FTC Disclosure: The publisher sent me a complimentary copy of Lucky Bunny for review; however, all opinions are my own and are offered without bias.

Cover? When I first saw the cover of Lucky Bunny, I almost let its "romanticky" look distract me from what was inside.  I actually passed it up once, and then when I saw it again and read the synopsis, I told myself not to be a snob.  After reading Lucky Bunny, the cover fits...Queenie and Tony, black and white, 50's style. Yep.

Title?  Queenie's dad "Lucky Boy Tommy" gave her a little stuffed bunny the day she was born.  Queenie keeps it with her for a long time but has lifelong analytical questions about whether a person's life is decided by "luck" or what she makes of it.

Why?  It's historical fiction, it's crime, it's London, it's a family drama...it's got my name written on it.

I was reminded of?  Liesel from The Book Thief - Young Queenie is just as smart and just as resourceful as Liesel was.  Queenie doesn't steal books obviously, but she steals just about anything else...she's a survivor.  Queenie is in England while Liesel was in Germany, and we obviously get to know Queenie much longer, throughout her adulthood, than Liesel...but for me, there were some very similar, deep, moving traits of these two memorable female characters for me.

What Now?  Lucky Bunny will be joining my other keepers in the glass shelves of my antique secretary...no Giveaway this time folks.  I also can't wait to get my hands on Jill Dawson's other books.  I LOVED this one!

Nan lived one flight down.  She was Dad's muvver, she'd had a great band of boys, and no girls, and all of them "bad as socks" and sure to be "the death of her."  Like lots of women at that time she'd all her teeth removed for no good reason except that she couldn't afford dentists' bills, and if she had any beauty, I think it went that day with the teeth.

Birds hold their breath, watching me.  I'm listening to my own heartbeat.  Bobby is bouncing on one leg, and then sniveling, and the white milk bottle smiles at me, glowing, handsome.  Take me.  I'm yours.  Come on, gel.  You can do it.  Come on.

"Well would you look at that, the gel's a proper bleeding actress, ain't she good at lying?"
I beamed at that: the first - maybe only - compliment she ever paid me.

"It's ten shillings and eight pence for the first one.  How much do we get if we have the girl too?" the lady asks.

Dad  loves me best though for my best skill: keeping mum, he says.  Keeping my lips sealed.  I can do that.  He's so tall and so swingy, he can "show out" as he walks along, with all the ladies looking at him, and he has something new: a limp, and as he limps by, the ladies cock their heads at him like little birds, their hands on their hips and smiling so, so sweetly, and kindly.  He's like something royal, like a prince or a soldier as he limps quickly through the station, touching his hat here and there to people.  The dog's bollocks, Mum would say.  Or a dream.

I loved the way his hands smelled of the coffee grounds from the cafe', or faintly of oil from his car, and how this combination was good, was masculine and sexy, when it came from Tony.  But the thing that only occurred to me later was this.  Stella.  She wanted him first and went for him, and Tony chose me.

When I really examined a lady (we never said "woman" in those days) who'd been wealthy for generations, I doomily concluded that her difference from me was indeed deep, and hard to fake.  bones and flesh grown from good food, not just in one lifetime, but over generations.  The jaw, the size of the ears.  And most of all the profound  certainty of where the next meal, the next hot bath, was coming from.

Once, at the Approved School, I remember Sister Grey saying to Sister Catherine, after looking at the files for a new admission and sighing theatrically, "How come all these street girls claim to have been abused by their fathers or uncles?  I ask you - how statistically likely is that?" Based on my experience running the club, based on the Approved School, based on Ruth and Stella and everyone I knew at the time, I'd say: very.

When we were rolling, working girls were picked up all the time by police, fined thirty shillings, and back on the streets the next morning.  The fine was part of the job, you know, a kind of tax.

These are my best skills - all the things the Green Bottles taught me and more.  Balls of steel, Gloria used to say.  And eyes in the back of my head.

That's the easy bit, the robbery.  The waiting, the getting away with it, that's something else.

Probably Mum had hoped that pleading criminal insanity would mean a lighter sentence than prison, that going to a hospital would have been easier.  She hadn't reckoned on secure hospitals, and drugs, and her own hopelessness, or the "indefinite sentence" idea, the fact that for you to get out, someone has to be interested, someone high up has to care, has to plead your case before the Medical Superintendent.  People - women - were locked up in places like that forever, for less than Moll did.

As long as you stay, you're convinced you can manage him, appease him, control him, match him, keep him sweet in some way.  Leave, or try to, and his threats become real.

It's like no one could actually imagine a bunch of working-class criminals, most of them knowing each other from poor bits of London or their time inside, actually planning it together, carrying off something that cheeky, "the crime of the century" they called it, without a posh bloke to boss them around.

People love to believe they're so much better than they are.  People who have never been tested, they're so quick to judge.  What do they really know about themselves?

Queenie Dove grows up in a criminal family in the East End slums of London.  Stealing, "nicking" or "hoisting" is what she knows.  She's praised for her skills while being sent away for her crimes is inevitable and even considered an expected part of life from time to time.  There is no question of right or wrong, just doing what you can to survive in an unforgiving environment.  Queenie is a survivor.  Childhood, adolescence, and into her adult years, including becoming a mother herself, Queenie, an incredibly intelligent, cunning, brave young woman finds her way in a world so harsh that few truly make it to the good life.

Song lyrics - all throughout Lucky Bunny, Queenie's story is complimented by song lyrics from first children's rhymes and then popular tunes from the radio during Queenie's lifetime.

Dialect and vocabulary - gel (Cockney slang for girl...not the stuff you put in your hair), nicked, hoisting, cozzers, "leg it," Old Bill, shop walkers, borstal boys, rolling...not just the dialogue, but the entire story, told by Queenie is written this way...with Queenie from time to time explaining analytically what "modern day" psychologists would label particular patterns of her life, especially during her times "inside."  I never felt left out though; I never felt confused; there is enough detail in Lucky Bunny that you can follow the patterns as well as hear the words being said.  I found myself many times repeating phrases out loud...just to hear myself (like the goob that I am) talking like Queenie in my best Cockney Southern accent :p

Moll Flanders - Queenie's mother's name is Molly...Moll for short, but Queenie knows the story of Moll Flanders and compares her life to the professional "con" who also never reveals her real name.

The Green Bottles, Gloria, Stella - the stereotypical idea of women thieves and/or prostitutes leads us to believe that they were all cut-throats and/or out for themselves or from traditional "gangster" movies, always dressed up to please their fella.  They don't really play a "part" in the crimes, probably due to the "birds are bad luck" belief.  However, within the culture of women thieves in the early 1900's in London, Dawson presents them as more of a family than lone wolves.  The cons, robberies, shoplifting, and even prostitution are just a part of their lives.  Crime is what they know; it's survival of the fittest; there's no guilt, and many times, it's even a game.  The Green Bottles take Queenie in after her mother is sent away.  They don't purposely teach her how to steal...they teach her how to stay alive...in the only way they know.  There's a serious support system here.

Tony in the beginning - unlike my initial jump to conclusions based on the cover photo, this isn't a "love story."  Tony is one part of Queenie's life...definitely an important part...but Queenie never thinks of their relationship as lifelong...because nothing is.  I think I wished for him to be her Knight in Shining Armour, but Queenie didn't really want to be saved from anything; she wanted to save herself, which makes their relationship that much more powerful.

The history - East End London 1930's-1960's, WWII, bombings in London, billeting of children during the war from the cities to rural areas in the hopes that they would be safe from bombings, East End slum culture, tube shelters, ARP officers...silence after the Bethnal Green tube station tragedy, kennel boys at the Greyhound races, Green Bottles, London gangs, Approved Schools, good time girls, Young Offenders place, underground clubs, Summer 1963 and the Profumo Scandal, The Great Train Robbery (Glasgow-to-London postal train), birth control, abortion, and birth,  prostitution, etc.  I could go on and on here...Lucky Bunny is packed with history and sociology.

Tony at the end - no spoilers here, but Queenie does prepare us when she tells Stella, "Nothin's for keeps...especially not a fella."

Nothing else to see here folks; move along.

Fans of Historical fiction, tough yet flawed heroines, alternate definitions of love and family, women's histories, etc. will love this book.  Just like I did. 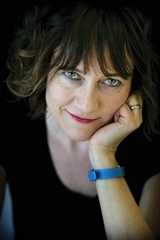