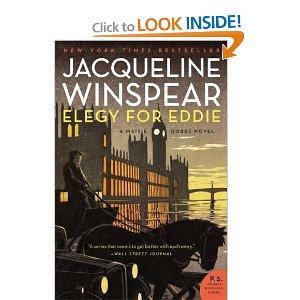 Source? Publisher via TLC Book Tours
FTC Disclosure:  I received a complimentary copy of Elegy for Eddie in exchange for a review; however, my opinions are my own and offered without bias.

Cover?  Eddie is the "horse whisperer" of his day and known fondly by all the horse and buggy drivers for his ability to calm a disturbed animal. It is, in fact, a group of these men (costers) who bring Eddie's case to Maisie.  The silhouette is, of course, London, the bridge and river where much of the "action" takes place.  The style of the cover is the same for the rest of the books in this series as well.

Title?  Maisie's mystery to solve within this story is for the sole purpose of providing comfort, solace, a lament (elegy) for the senseless death of childhood friend Eddie...a mentally challenged, gentle man.

Why?  Historical fiction, old England, a "cheeky" heroine with respect for life and family, reinvention of the feminine self...yes, thank-you.

Reminded Of?  to a certain extent the new lifestyle to which Maisie is struggling to adjust is very similar to that of the Crawley's cousin Matthew, the heir to the Crawley fortune and home, on Downton Abbey.  While the Crawleys were born to their positions, their cousin Matthew was not and finds some of the excess troublesome and has a difficult time bending to some of the house customs such as someone helping him dress and all the other pesky rules.

What Now?  Elegy for Eddie is a keeper...even though it took me a while to get into it, by midway I found myself really wanting to spend more time with Maisie Dobbs...get to know her a little better...maybe we'll even get to be friends ;)

It was Lady Rowan who, in 1912, had discovered the young domestic servant reading in the library in the early hours of the morning.  Recognizing the girls' intellect, Rowan had turned to her friend, the esteemed psychologist and forensic scientist Maurice Blanche, for advice.  So began the relationship - and the opportunities - that formed the woman Maisie would become.

...Eddie wouldn't have felt a thing when the roll of paper fell onto him, given that he was backward.

During her apprenticeship, Maurice Blanche had mentored her to spend time with the dead, if at all possible.  She had learned that in quiet contemplation there is respect for the one who has passed.  Given their task - that of discovering the truth behind an untimely death - such an interlude served as a reminder that a human life had been lost, and with that, there was much grief.

"You did all right for yourself, all things considered, didn't you Miss Dobbs?  You look more like a gentlewoman than a girl from the streets.  I thought it was only Charlie Chaplin who came out of Lambeth and did well for himself."

And at that moment, she yearned to be able to share her confidence with Maurice, just once more.  He would have known exactly what questions to put to her.  Hadn't he always said that the power was in the question itself?  He'd taught her that one must let a question linger in the mind as one might savor wine on the tongue, and he'd cautioned that a rush to answer could diminish all chance of insight.  Indeed, if one continually avoided questions by trying to answer them immediately, such impatience would become a barrier on the path to greater knowledge of oneself.

Maisie loved this London, as much as it grieved her to see the poverty, the desperate need of people in Lambeth; at the same time, there was a fierce grandeur about the factories, about chimney stacks fired by the hard work of an ordinary, working-class population.

These were people for whom a cup of tea was balm for the shock of bad news; perhaps a death, an accident, the loss of a job or a roof over one's head.  The more desperate the word that came - from a neighbor, in a letter, from the baliff or the police - the stronger the brew and the sweeter it was to the taste.

There are ways of helping without doing everything - otherwise you take away the opportunity for them to be proud of something they've achieved.

But later, as she slipped down further into the bathtub filled with hot water, soaping her body and feeling the pressure of the day wash from her bones, she wondered - not for the first time in her adult life - who am I?

"I heard Dr. Blanche once telling you not to take it all on your shoulders.  Remember that, Maisie.  Remember. Some things you just can't change - about people or things, or the way of the world.  And some are not yours to change.

"Jesse, I was brought up to mind my manners, so it grieves me to have to tell you to button it until I'm finished."  She pointed to her lips.  "I may be a woman who lives on this side of the water now, but if you think I've forgotten the streets, you can think again."

A beloved community member, Eddie Pettit, is killed in a fluke factory accident, and suspicions point to foul play.  Maisie vows to Eddie's mother to investigate and bring justice for her son even though the many of the answers are more complicated and have long range and deep reaching consequences than Maisie could have ever imagined.  Along the way, Maisie also navigates her newfound status as a woman of wealth with that of her earned independence as well as her relationship with Viscount James Compton.

The Setting - England - old England to be exact with names of cities, towns, communities, landmarks, estates - I'm unfamiliar with many of these, but I was able to follow a general lay of the land through Winspear's detail.

The history - early history of Hitler, Churchill, political climate of Britain in between WWI and WWII along with ideas of how America might fit into the future of Britain as an ally.

The brief look at the horse and buggy culture at the onset of motor car popularity - I found Eddie's death to be a figurative comparison to the death of the horse as the main mode of transportation.

A British Manor Household - very similar to Downton Abbey in that there is a butler, footmen, housekeepers, gatekeepers, chauffer, etc. all with very specific job descriptions, designed to keep the Comptons comfortable in the manner to which their class is accustomed.  Much fussy etiquette is observed at all times to Maisie's chagrin much of the time.

Maisie's relationship with the townspeople - somehow Maisie is able to move back and forth between social circles with ease as far as how others accept her.  She is not always comfortable fulfilling her "duties" as a society lady but seems to be respected wherever she goes.  While she's certainly not a perfect character and feels the need to question and analyze her ever move, she manages to carry on even the most sensitive and tense conversations without letting her emotions get the best of her.

The portrayal of Eddie as a challenged individual who, contrary to popular belief for much of history, was not just a "thow-away" person...Eddie had many gifts to offer those who took the time to find them.  He lived and was loved by the people of his community and earned his own keep with his mother and teacher's help until a selfish individual took advantage of Eddie's willingness to please others...a lesson for today.

The End - no happy wrap up here...history is complicated and politics even more so...and don't forget relationships :p

Evelyn Butterworth - Bart's girlfriend - In the midst of tragedy, Evelyn puts on her "big girl britches," doesn't wallow in her sorrow, and keeps on moving.  What a gal! :)

Priscilla Partridge - I was a little worried that she was too good to be true, but I'm going to assume that she's exactly the kind of friend that Maisie would want...someone who accepts her for who she is, doesn't try to pretend she's something she's not (even though she has money), and knows when to push and even more importantly, when to back away.

Order - While I don't think Elegy for Eddie has to be read in order with the other Maisie Dobbs books (because I didn't have a problem following the plot of this 9th book of the series), I'm just easily distracted enough to want to know about the people and circumstances from Maisie's past...her mentor Maurice, her previous life as a chambermaid, then nurse and her first love who died from injuries sustained in the war, etc.

John Otterburn - a dangerous man disguised in wealth and his ability to reach many people and wield his power through his ideas via the newspapers he owns and his intolerance for those who question him.  Can you say "Propaganda"?

Bart Soanes - in his mind, a newspaperman with a a duty to shine light on injustice...but at what price?

James Compton - please don't be mad - I just don't know...I'm not sure he knows who he is...he morphs in and out of character - the snobby Viscount expecting Maisie to fall in step to the young man who wants more in his life than following the path of his birth.  I'm holding out my final decision on James until I find out more about him.  I'm just not sure he's right for Maisie (since I'm the expert and all :p)

I'm going to assume that anyone who's followed Maisie thus far would want to continue her journey.  Maisie's story is an easy one...no grimacing violence nor language with focus on a self-made woman during the early twentieth century weathering both highs and lows of life. 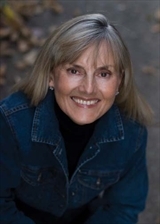