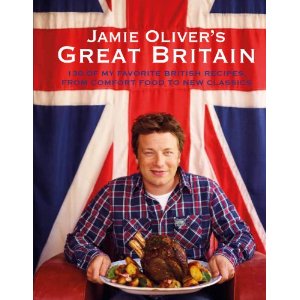 Source? The publisher via TLC Book Tours
FTC Disclaimer: Although I was given a complimentary copy of this spectacular cookbook, all the opinions below are my own and are presented without bias.

Title?  Pretty simple and straightforward, but Jamie Oliver's Great Britain is exactly what this book is...from its humble beginnings, traditional dishes and the whys and wherefores of such recipes, to the newer fare influenced by immigration, travel, and generations of exploration.

Why?  Even though I don't get to cook as much as I would like to, I consider myself a foodie.  I love tasting, learning, tasting, trying out new recipes, tasting...have I mentioned tasting?  I've seen Jamie Oliver's show a time or two and love how he just naturally throws things around.  I also love that accent :)

What Now? I'm keeping this one...sorry ya'll. I know I won't cook all these recipes...um, because I'm a little scared of black pudding...really, I am.  I actually tried a bite on my trip to Ireland last year...nope, can't do it.  But, the history and Jamie's voice heard through the writing itself is enough reason alone to keep this one and flip back through it from time to time.

***The good news is that the publisher is generously offering readers in the U.S. and Canada a chance to win one copy of Jamie Oliver's Great Britain!!! How "brilliant" is that??  Just leave a comment with your email and blog addresses and you're entered to win!!

My trip around Britain mirrored much of what I saw when I traveled through America.  Chefs, producers and artisans all around the country are retracing old recipes, rediscovering great local ingredients and focusing on simplicity and quality.

I'm so in love with this chapter.

In the past I've made almost exactly this soup recipe but have just added a few swigs of cream and a few handfuls of clams and corn at the end, rather than peas and dumplings.  That turns it into a kick-ass New England clam chowder.  Not the most British recipe in the world, but equally tasty.

Historically, salads were mainly eaten by the upper classes because they weren't filling enough to keep the workers going all day in the fields and factories.  But now of course, they're much more accessible, not to mention incredibly diverse.

It's a beautiful combo, and by the way, this salad jammed into a roll or sandwich makes a brilliant lunch.

It's not hard to see why British pubs are the envy of the drinking world.  They're quirky, cozy and so much a part of the British landscape it's impossible to imagine Britain without them.

Although it's not hard, this recipe does have a few stages - but bloomin' hell, it's worth it.

So many people, especially kids, whinge and whine when faced with a plate full of Brussels sprouts, but as far as I'm concerned these humble vegetables have had a bad rap, thanks to too many people cooking the hell out of them and making them sad and soggy.

One of the things I love most about our desserts is that they're not particularly hard to make, and not so accurate or precise that you feel you have to be on your best behavior when you tuck into them.

It's my pleasure to pass this recipe from my mumma to you lovely people.

Growing up in his parents' pub, Jamie Oliver learned a lot about food and drink very early on.  To say that traditional British food is where he comes from and who he is today would be an understatement.  Oliver takes us on a tour of some of the most well known (food-wise) places in Britain and to the roots of various dishes.

The history - not only does Oliver present Great Britain to us (other countries, other cultures) through her food, but he also speaks to British cooks as well (I think).  Every generation loses a little bit of history...I worry about that a lot.  For example, what is more simple than roast chicken?  Pretty much nothing, right?  But, how many young brides or even older ones (ahem) know how to cook one...or really even considered cooking one?  We all need to support our origins, our resources, our history...and that of others as well.  I think Oliver has done that very nicely with Jamie Oliver's Great Britain.

The photos - I MUST have photos...and Oliver doesn't disappoint.  There are color pictures throughout this coffee-table like cookbook...of dishes, foods, shops, farms, people, memorabilia, Oliver cooking and people eating.

No sassiness - the food, the tables, the linens, etc. are all simple.  Even the most down to earth, non showy cook can see himself/herself serving these dishes to his/her family.  There are no special dishes to buy or fancy gadgets...no magic potions or measuring tools...just food, about as natural as you can get and as corny as it sounds, served with love for his country as well as his culture.

The tidbits - did you know "fish and chips" did not become an English dish until the 1800s when Jewish immigrants introduced it?

Dipping soldiers - little "sticks" of bread, toasted or cheesied up for dipping in soups...squeeeee!

The entire section on asparagus :)

Black Pudding - and anything that touches it.  Oliver tries to persuade those of us who "dismiss black pudding" to give it a try...I did.  Still don't like it :( You can google it if you want to...I'm not going to talk about it anymore.

The breakfasts - this is a personal weirdness for me...I had trouble in Ireland as well...give me some eggs and bacon and I'm good...baked beans are for barbeques, people :p

Many of us cookbook collectors are really hard to please...we've seen it all and a slapped together, list of ingredients and boring page after page of recipes just won't cut it anymore.  This ain't that, people.  Not even close.  Foodies, history lovers, nature lovers...or those of us who appreciate it all, will love this book, which is so much more than a cookbook.  The only folks I'm pretty sure won't really care for this cookbook are vegetarians.