The Lincoln Conspiracy - Passages to the Past Book Reviews 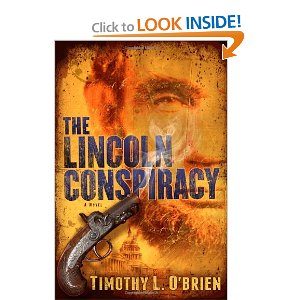 Format? hardcover
Source? the publisher via Passages to the Past

FTC Disclosure: I received my complimentary copy of The Lincoln Conspiracy in exchange for review.  However, the opinions and comments within my review are my own and are offered without bias.

Cover? Early photography and images of Lincoln play a major role in The Lincoln Conspiracy as does the derringer.

Title? Nothing about politics is simple...and very seldom is any political action as obvious as accepted history would have us to believe.  The idea that the assassination of Lincoln was indeed a conspiracy rather than the actions of one man are credible indeed.

Why? I'm all about American history...and historical fiction chock full of facts, names, dates and places is what I love best.

What Now? I'm keeping this one, so no giveaway this time, folks.  The Lincoln Conspiracy has also made me that much more determined to read Mrs. Lincoln's Dressmaker very soon.  I'll also be spending some time with other books mentioned by O'Brien in his author's  notes :)

Reminded me of? Gods of Gotham, The Shawshank Redemption

Several correspondents from the Atlantic Monthly mingled at the tables and settees, gabbing about Mr. Lincoln's murder, but Emerson, Longfellow, and Lowell weren't among them, thank the Virgin.  Hawthorne was the only trustworthy one of the Atlantic's abolitionist lot, and he's dead now. (46-47)

"No, our government just pays me," Neil replied.  "They wanted to dump cogniacs all over the Secesh.  The more shovers I sent to the South with fake notes, the more Chase and Stanton were willing to pay me.  People feel lost when they don't have faith in the money they carry in their pockets.  You spread enough bad paper around the South and it's just as bad as gunshots.  But the war winds down and my trade expires and they've warned me not to turn green." (60)

"You walk through that door, Temple, you and Augustus, hanging on to those diaries, and you both walk out into a world of pain.  You can't walk away from it after that." (71)

"I sometimes arranged dead soldiers in more...more...dramatic positions for my photographs.  It gave them dignity."
"No, it gave Lincoln's government powerful pictures it could plant in newspapers to curry favor for the way - and it gave you pictures that you could sell everywhere else to fatten your purse," Pint said. (79)

"They're singing it to warn everyone else that strangers are here.  Every Negro in the alleys knows we're here now; the dice and cards are coming up, most of the doors are closing, and it will all be about watching now.  whites in Tiber Island, if they aren't unloading goods from boats into the warehouses, just mean trouble to these folks." (84)

They were municipal toughs proud of their station and on patrol, really, to keep the District in order in a way that Stanton and the other federals found comfortable and reassuring.  Insurrection and dissent had already split the Union.  No reason to tolerate it in the District itself. (100)

"I think that 'twixt the Negroes of the South and the women of the North, all talking about rights, the white men will be in a fix pretty soon." (117)

Lizzy was Mrs. Lincoln's dressmaker, and the pair sometimes shopped together, with Lizzy often forced to wait outside stores that barred her entry.  While Lizzy's clothes scarcely matched the cost or elegance of those her mistress wore - few women in the District, of any means or background, could match Mrs. Lincoln's spending, after all - she took pride in the cut and quality of her garments. (130)

But you weren't in the President's House when Mr. Lincoln's body was brought to the East Room.  Mrs. Lincoln screamed and wailed in her bedroom, and Robert tried to calm her.  Tad was at the foot of her bed with a world of agony in his little face.  I shall never forget the scene - the wails of a broken heart, the unearthly shrieks, the terrible convulsions, the wild, tempestuous outburst of grief." (140)

He hires Mr. Pinkerton's agents to follow me, and he is in league with the railroad men and the New York bankers.  His father had lost faith in him before he died.  Those men all tortured the president so...," she said, her voice trailing off. (144)

"It is the night before a commemoration of a war my husband prosecuted, and there is no one here to see me off but my family and a baggage man," the widow said.  "I will not miss Washington." (190)

As the misery of this cruel war and our noble endeavor come to an end, I am, by the day, growing profoundly aware that the Republic may well bed to a force that the war itself has helped advance and institutionalize: the might of the railroads and of the great men that create and support them.  - Abraham Lincoln, 1865 (208)

The Proprietor of this hotel has roomy underground cells for confining slaves for safekeeping, and patrons are notified that their slaves will be well cared for.  In case of escape, full value of the Negro will be paid by the Proprietor. (211)

"Mr. McFadden, you must have respect for our needs and priorities.  We have successfully prosecuted a war.  The country will be re-made and the South will be absorbed into the national plan.  President Lincoln has been cruelly and unjustly murdered and we have his assassins incarcerated.  We want completion.  We want to move forward.  Why do you insist on standing in the way?" (257)

She rose from the table and then cupped her elbow in her palm, bringing her hand up to her face and hunching over.  In a moment she was standing upright again, her composure intact.
"I miss him in a way that consumes me, Augustus." (276)

"There is a new industrial order in this country, and it is establishing itself despite government intrusions.  To the extent that the government becomes an obstacle it will be brought to heel or forced aside." (344)

The Civil War is over and President Lincoln has been assassinated.
Temple McFadden - Washington D.C. police detective, amidst a rendezvous to transfer the spoils of war...stumbles upon secret documents, coded communication between John Wilkes Booth and others, conspiring to kill the president as well as Mrs. Lincoln's personal diary.  Immediately, powerful men from all directions begin to demand the diaries, which stirs Temple's curiosity about what (or who) might actually be hidden therein.  He disappears and keeps those who would just as well kill him than to see him escape with the evidence continuously guessing about what Temple's next move will be.
With the help of his medically trained wife Fiona, his friends, including some well known abolitionists and former government spies, Temple is determined to get to the bottom of the deep well of lies that insinuates a cover-up of epic proportions surrounding the murder of President Abraham Lincoln.

The time Fiona spends with Mrs. Lincoln and Lizzy Keckly - there's so much story here and just enough teasing to whet my appetite for more.

Depth - oh boy...this is the kind of historical fiction that I like best...the kind that keeps me hopping between the book and Google, my old history books and American Literature anthologies to establish timelines in my mind.  The Lincoln Conspiracy covers a myriad of individuals and issues all tied together through actions and events before during and after the Civil War.  Some of those characters and events include:
Allan Pinkerton,
Lafayette Baker,
Alexander Gardner - Gardner's Photographic Sketch Book of the Civil War,
Secretary of War, Edwin Stanton
Irish immigrants in DC after fleeing the potato famine in Ireland
Robert Lincoln's divided loyalties between the railroad and his father The President
Thomas Scott (head honcho railroad man)
Isabella Baumfree (Sojourner Truth)
Treatment of African Americans after the Civil War
Lucy Hale - Senator John Hale's daughter who was romantically involved with "Johnny Booth"
Generals Grant, Sherman, and McClellan
Swampoodle
Kate Warne of the Pinkertons
The 2nd wave of photography...from the daguerreotype to the stereotype used by some of the first American photo-journalists to record history and keep the public informed, but to also spy and spread propaganda.
Railroad expansion plans and how they affected the Civil War
Dorthea Dix
actual excerpts from diaries, letters, etc.

The friendship between Augustus and Temple - based on mutual respect - and a willingness to lay down one's life for another regardless of race.

The marriage of Temple and Fiona - also based on mutual love and respect...a man who appreciates his wife as an equal, one worthy of her own history, with or without his.  And, a woman who doesn't try to make her husband into something he is not.

Historical facts to dispel some of the commonly held but fabricated beliefs of today's citizenry - Civil War "ended" slavery.

Use of old spiritual and/or patriotic songs scattered through out the text - to pull the reader in with emotional punch - it works :)

Temple's history is embedded within action of the story and it works well for me...except for the part where he actually dreams of where his strength comes from.  I wish this had come a little earlier for me because without this piece of information, Temple seems a little like a Superhero at first.

Nothing to do with the story itself, but I always breathe a heavy sigh when I leave a book with more questions than I had when I began.  There's so much more to learn and so much more to consider.  We probably won't ever have all the answers about President Lincoln's assassination, or many other historical events, but we can keep our minds open and look to the evidence for continuous analysis and application for future reference.

If you like American history, Abraham Lincoln, stories about Civil War era Washington D.C., the early police force in D.C. and conspiracy theories, this is your book.  This is not a fast read by any stretch of the imagination, but why would you want to do that anyway?

Monday, October 29
Feature & Giveaway at Passages to the Past

Thursday, November 8
Review at Unabridged Chick
Review at Book Dillettante
Author Guest Post at So Many Books, So Little Time