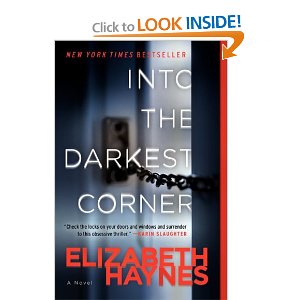 Into the Darkest Corner by Elizabeth Haynes
Harper Collins, 2011

Format? oversized paperback
Source? the publisher via TLC Book Tours
**FTC Disclosure: I received a complimentary copy of Into the Darkest Corner from the publisher; however, the review and opinions below are mine and offered without bias.

Title? perfect...Cathy's PTSD/OCD controls her life to the point that the darkest corner is where she retreats when the panic consumes her.
Cover? also perfect...Cathy obsessively checks the locks on her doors...for a very good reason.

Why?  The OCD theme is what interested me the most about this book...and that it's described as a psychological thriller.

Reminded of?  "Sleeping with the Enemy"
What Now? I'm gonna hold onto this one.  It's not really a"keeper" per se, but there's a lot of psychology worth holding onto here.

He stood motionless, one hand on the shovel, watching the blood flow out of her and marveling at its glorious color, a liquid jewel, and at how even at the moment of death she was still the most beautiful woman he'd ever seen. (9)

So, it was Saturday again, and an odd-numbered day, and I'd run out of bread and teabags.  The teabag issue was a big one, because tea is another important rule, particularly at weekends.  I know that if I don't have cups of tea at eight, ten, four, and eight o'clock I will grow incresingly anxious, both from the failure to get things right, and probably from the lack of caffeine. (28)

I went to see him, wearing that red satin dress.  His face when he saw me was incredible.  I gave him a smile and a wink as I passed him going into the club.  Through the night, dancing with people I knew, chatting at the bar with some people I hadn't seen for a few months, then later on when Claire and Louise turned up, I kept seeing his face in the crowd, at th edge of the dance floor, watching me. (65)

Until Christmas, everything was fine. (109)

"Cathy, you don't need me to reassure you.  You are going to get your condition under control.  If I keep getting involved with your checking rituals, even by waiting for you to do them, you're not going to be as motivated to work at it." (146)
I put my hand against my mouth to stop - what?  A scream?  There was nobody left now.  Nobody at all.  It was just him, and me. (213)

"Catherine," he said, his voice low, shockingly calm.  "Don't make me do that again, okay?   Just come home on time, or let me know where you're going.  It's simple.  It's for your own safety.   There are some really dangerous people out there.  I'm the only one who's looking out for you, you know that, don't you?  So make it easy for yourself and do as you're told." (216)

I spent the next hour or so going over the house again, tears pouring down my cheeks, looking for the way he'd gotten in, and I never found it.
That night was my first panic attack, the first of many. (249)

Catherine meets Lee.  He's exciting, sexy, drop dead gorgeous...and dangerous.  By the time Catherine realizes she's in trouble, it's too late.  Lee has infiltrated her friends, and no one believes her.  She has to get away from him...but how.  If she fails, she knows he'll kill her.
Fast forward three years.
Cathy has changed her name and is in hiding, suffering from a serious case of OCD as a result of the psychological and physical trauma she experienced in her relationship with Lee.   As she takes real steps to overcome her condition, Lee is released from prison.  Is he watching her?  Or is it another hallucination?
How does she continue making progress dealing with irrational threats...if her most feared threat may actually be rational?
Hold on to your seats.

The time shifts...back and forth between present and past.  At first I wasn't sure if I would like it or not, but I ended up really enjoying the break in the tension...a chance to shift from just a thriller to the analysis of the thrill...if that makes any sense at all.

LOVE that Stuart is a psychologist...so perfect to see not just the clinical side of Cathy's issues but the personal as well...with someone who can truly support and understand her.

It's no spoiler that the villain of this novel is Lee...and let me tell you, he is a villain of all villains...I have caught myself many times wondering why women who are battered stay with their abusers.  Lee is an extreme (I hope) example of why, but I sure get it now.  Shivers.

Cathy is a brash young woman on her own...she gets herself into a mess...a HUGE one...but then she works incredibly hard to survive and go on with her life.  At first I judged her.  She spends a lot of time partying...and partying hard.  But, later in the novel her whole puzzle comes together and I could see how she might have unconsciously made choices that weren't the best.  The psychology, trauma, death, themes are imbedded throughout and paint a rich picture of how the human mind responds to certain events in life.

The vivid descriptions of panic attacks and Cathy's "checking" routines.  These are very obviously written by someone who knows and understands the psychology behind them.

Lee - Dear young women everywhere, #1 Any man who seems too good to be true...probably is. #2 If a guy you just met sets off your common sense alarm, turn the other way and run like hell.

Cathy's friends - supposedly these characters were Cathy's best, lifelong friends, yet they constantly engaged in dangerous behaviors and encouraged her to join them (which she did of her own free will), but when the time came to support her, none of them followed through.  Who needs enemies with friends like this?

If narratives that delve into mental illness, panic attacks, domestic abuse, fear...both irrational and rational, psychotic boyfriends, psychology and young adult life in London interest you at all, this is your next read.

ELIZABETH HAYNES is a police intelligence analyst. She started writing fiction in 2006 with the annual challenge of National Novel Writing Month (NaNoWriMo) and the encouragement of the creative writing courses at West Dean College. She lives in a village near Maidstone, Kent, with her husband and son. - TLC Website