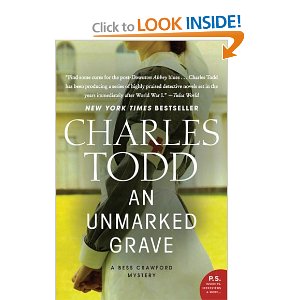 Why? Todd is an author I've wanted to read for a while.  Historical fiction without all the bodice ripping, but including meat on its bones and a strong, independent woman realistically portrayed are all aspects of a novel that pull me in quickly.

Title?  the mystery of this Bess Crawford installment revolves around a nameless body that shows up in the pile of dead former patients at the war hospital where Bess is serving on the frontlines in France.  Unless the mystery of his identity is discovered, he will be buried in an unmarked grave.  Perfect.

Cover?  Bess in her uniform is perfect, but the picture is a little sunny for me...I never pictured that much brightness in this story.

I was reminded of?  I couldn't help but think of Lady Sybil from Downton Abbey :)

What Now? I'm definitely going to back up and read the other books in this series...As a matter of fact, the first two books are on sale right now as ebooks, and I have downloaded them already :)

Another Sister had joined me there, both of us struggling with exhaustion and hoping to find in the fresh air, away from the odors of death and disease, a brief, desperately needed renewal. (83)

If the Germans had captured him, he would have faced a firing squad.  Simon would consider that a lesser problem than being caught by some of the tribes of the Northwest Frontier in India, but he would have been just as dead, although not as quickly. (90)

I looked down at the little pistol.  Nurses were not permitted to carry weapons, but this time, remembering my feeling of helplessness when that arm had come around my throat and how lucky I was that I'd been able to kick the water pail, then scream, I touched it with my fingertips and then settled it carefully in the pocket of my uniform. (108)

Captain Barclay was adding grimly, "Something could have happened in the trenches between this man and Carson.  Not everyone out here is a gallant soldier serving King and Country." (109)

His mouth was tight as he said, "Don't argue." His eyes closed and he grimaced.  "Do it."
I'd been trained all my life to respond to that tone of voice.  One obeyed instantly, doing as one was told, without question. (162)

It was picturesque in its own way, running up from a small stream to the crest of a hill, a smattering of houses and shops, a stone chapel with a short steeple, and several outlying farms that lay like patchwork across the stream. (176)

I had been born and brought up in an Army household, I understood duty and sacrifice as well as any man in the Army or any woman married to a soldier.  Waste I could not endure. (187)

We were all so young, I thought as we drove away, the men who came to us and the sisters who treated them. I had seen and done things that my grandmother would have wondered at, but I had also discovered that courage was the ability to face what had to be faced, when it was impossible to run away. (214)

I worked late into the night, and I rose early in the morning, before sunrise, as the long lines of ambulances and an overburdened lorry brought us more and more wounded.  A hardened veteran, watching the long lines being sorted by one of the sisters, said, "They'll be non one left in England over the age of sixteen." (217)

Just before succumbing to the Spanish Flu epidemic, Bess Crawford discovers that a killer has hidden a body among the dead, wounded soldiers stacked in the holding room awaiting the burial teams.  Upon recovery, she makes it her duty to find the identify of the dead soldier as well as his killer.  Her main focus, however, quickly becomes staying alive herself once the killer realizes she is on to him.

More stuff to Google:
Queen Alexandra's Imperial Military Service
nurses called "Sister"
The Gurkhas
WWI - France
War crimes between soldiers on the same side.
communication and transfer of information in wartime when phones were not commonplace
wartime censors
1857 Mutiny (Indian Army turned on its English officers and their families)
WWI - spies from all sides
WWI - "special forces" - no wounded left behind to be questioned by Germans, they would be killed instead
food shortages, the "war effort" and how some smaller farming families were affected
England, Wales cultures and people, language intricacies
field hospitals, aid stations, surgical theatres and medicine in general during WWI

A "real" picture of war - death, death and more death...I think in some "hero" stories, this picture is left out...to me that's propaganda.  The real stories MUST be told.

LOVE, LOVE, LOVE the espionage hinted...Bess's father and Simon's involvement as well as their obvious high ranking within their groups...Todd doesn't provide a complete explanation of any of the secret/classified/"spy stuff" but that adds to the intrigue.  I also LOVE the way Bess is portrayed as a woman of the times, with class, manners, and one who honors tradition...but also a woman who can think for herself, stand on her own two feet, and love a man without swooning over him or pining away for him.

Simon - he's a poster boy for the older man.  Someone who has lived his life and isn't in any hurry to prove himself or run around with his chest stuck out like a rooster...settled but still very active in life...just enough mystery to keep a younger woman very interested.  I think he's the perfect match for Bess...of course, I don't know their background yet...nor where the next book takes them, but for now, he's my pick.

Brief but rich descriptions of the English and French countrysides

At first I had a difficult time keeping up...I'm not sure if it was because I'm jumping into this series out of order or if I was just trying to switch gears a little from my last read which was a thriller...I really didn't get involved in this An Unmarked Grave until Bess was sent back to France after recovering from the Spanish Flu.

There were a lot of characters...and there were times I couldn't remember who was who and why each person was important and most importantly how they all tied together.  I'm sure this has something to do with jumping into a series in the middle without having read the first books.

Bess Crawford is a believable young woman asserting newfound independence as a nurse with exceptional skills both within and outside of the field hospital.  If you like realistic historical fiction and believable and intriguing characters, give this one a go.  Fans of Downton Abbey will really appreciate this one.