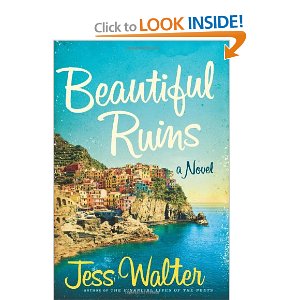 Format? Hardback
Source? the publisher via TLC Book Tours
**FTC Disclaimer: I received a copy of Beautiful Ruins from the publisher in exchange for a review.  However, the review below and the opinions therein are my own and offered without bias.

Cover? Beautiful...even though the village on the cover seems a bit larger than what I imagine Porto Vergogna would be like.  I've spent some time browsing pictures of Italian villages on the Mediterranean Coast since reading Beautiful Ruins and I have to say I am smitten.

Title? Perfect...we are who we eventually become, and the sum of our person is made up of disappointments, hardship and tragedy, probably more so than the best times of our lives.

Reminded me? the quote from Grey's Anatomy, "We are all damaged somehow."
Seven Degrees of Separation

Why?  Italy, Richard Burton and Elizabeth Taylor on the set of Cleopatra, and a host of other unforgettable characters whose lives are all tangled up together?? Bring it.  A no-brainer for this reader.

What Now?  This one's a keeper for sure.  Onto the shelves of the antique secretary it goes.

"Words and emotions are simple currencies.  If we inflate them, they lose their value, just like money.  They begin to mean nothing.  Use 'beautiful' to describe a sandwich and the word means nothing.  Since the war, there is no more room for inflated language.  Words and feelings are small now - clear and precise.  Humble like dreams." (64)

"These American movie people, they are pigs."
Pasquale agreed.  "To send a woman off and then forget about her..."
"They mock true art," Tomasso said.  "They take the full sorrow of life and make a circus of fat men falling into cream pies." (111)

Afterward, she leaned forward with anticipation, feeling the buzz she always felt when one of HIS films started. (210)

Pat was sitting on a folding chair in an empty room, head in his hands, fingers lost in those currents of wavy brown hair.  He pushed his hair aside and looked up at her; those eyes.  No one understood how much they were in this together, Pat and her.  We're lost in this thing, Dee thought. (214)

Alvis stared at his one sentence, so odd and fragmented, so perfect.  Then he wrote another sentence and another, and soon he had a page, at which point he ran down the stairs and had a glass of wine with his muse, the serious, bespectacled Carlo Tursi.  This would be his reward and his rhythm: type a page, drink a glass of wine with Carlo. (227)

Liz?  Impossible to deal with.  Emotional.  Stubborn.  Contrary.  But Burton was a pro.  And this wasn't his first piece of primo tail.  Our only chance was to reason with him.  When he was sober. (243)

But other times, honestly, the whole idea of being at peace just pisses her off.  At peace?  who but the insane would ever be at peace?  What person who has enjoyed life could possibly think one is enough?  Who could live even a day and not feel the sweet ache of regret? (315)

...- and on and on it goes, in a thousand directions, everything occurring at once, in a great storm of the present, of the now -
- all those lovely wrecked lives - (329)

A beautiful lovestruck starlet, Dee Mornay, arrives in the village of Porto Vergogna, Italy to wait for her lover and inadvertently changes the life of the young Italian man Pasquale Bursi.  Each of their changed lives affect others as well, from Pasquale's former girlfriend and the child he fathered, to Richard Burton and Elizabeth Taylor who are filming Cleopatra a short boat ride away, to the movie producer and his young assistant some 50 years later.

Dee - Dee/Debra is one of those characters that I will not soon forget.  Strong yet fragile.  Independent yet used.  A survivor, albeit a very tired one.  Forgiving, but not gullible.  A woman and a mother and a lover.   Hurt by many of the other characters in some way, her ability to persevere outshines them all.

Pasquale - Pasquale wouldn't like for me to call him an honorable man...but he was.  Honorable doesn't mean we always do exactly the "right" thing.  We just have to always want or try to and then repair the messes we make, especially those messes that affect or hurt others.  We live our lives to the fullest; we expect to get knocked down, but then, we brush our britches off and try again.  That's Pasquale.

Alvis's story, The Smile of Heaven - I love Alvis's little piece of history...where Italy stood during WWII, how the German soldiers hid in the cliffs and how Italy fared after the battles on her homeland.  Alvis is one of those characters that I wanted to be ok...but how can a man be ok after surviving all that he had?  While Beautiful Ruins is not about alcoholism, alcohol plays an important role in more than one characters' lives.   Some of them survive, some survive for a while, and some of them simply don't.  Walters' portrayal of the survivor who "on those days when he imagines getting just a wee bit higher (See: every day)," he "concentrates on the steps" (333) is spot on and just about as realistic of a portrait as I've ever read of a successfully recovering addict.

Shane's idea for Donner! - Of course, this was not a piece of history I had never heard of, but for the first time I thought about the events of the Donner Party tragedy from another perspective other than horror.  The state of mind, the experience, the will to live and then the aftermath...could life ever be normal again?  I also appreciated Walters' ability to bring in a seemingly unimportant character such as Shane and then make the connections so far down the line.  I would love to see Walters' notes on how this all comes together or to hear/read an interview in which he discusses the crux of the story.  Sheer genius.

Michael Deane - how much time do you have for me to tell you just how much I despised this character?  A snake in the grass, selfish, nasty, no honor or ideas of truth or any concern whatsover for anyone else but himself and the almighty dollar.
The kicker is that I'm sure Walters' planned my disdain from his first description of Deane.

Richard Burton and Elizabeth Taylor - Now, let me explain myself.  As years go by, I think we all  fall into that romanticized notion of these Hollywood icons...Burton and Taylor's romance and subsequent marriages are considered one of the greatest love stories of all time.  In reality, they were a train wreck...fueled by alcohol, drugs, affairs, fighting, selfishness, and the list goes on and on.  Did they love each other?  They both said they did...for the rest of their lives...but geez, what an existence.  It really made me sad more than anything else.  And, then I got angry at all the other lives around them that they crushed in their wake.  I doubt I'll look at them the same way ever again.

If you like history, old Hollywood, love stories that aren't all ooey gooey and/or Cinderella-ey, and especially if you love the smaller villages in Italy along the Mediterranean Sea, you will love Beautiful Ruins.