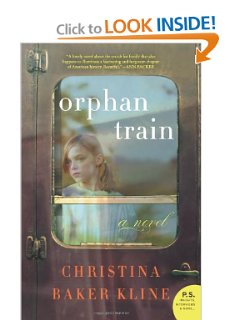 Format? paperback
Source? publisher via TLC Book Tours
**FTC Disclosure: I received a complimentary copy of Orphan Train in exchange for a review.  The review below and the opinions therein are my own and offered without bias.

Cover? A little glossy compared to the reality for most of these children...even though they were "spit-shined" before meeting the people who might adopt them in each city.
Title? Pretty obvious...but works for me.

Why? Ever since reading The Chaperone, I've been interested in the orphan train period of U.S. history.  I'm a pretty easy target for historical fiction that looks into this era.

What Now?  I'm still blown away by this history...I spent as much time in the P.S. section of the book (author notes and about the book) as I did reading the story...of course, that includes googling time :)  The authentic pictures in this section of my HarperCollins edition were amazing...I found myself looking at each photo, at each little face, up close and personal...trying to look into the eyes of those children who had no one.
It's possible I'm a little obsessed.

No substitute for the living, perhaps, but I wasn't given a choice.  I could take solace in their presence or I could fall down in a heap, lamenting what I'd lost.  Prologue.

She reads all the time - in the halls, in the cafeteria - mostly novels with angsty protagonists: The Virgin Suicides, Catcher in the Rye, The Bell Jar.  She copies vocabulary words down in a notebook because she likes the way they sound:  Harridan. Pusillanimous. Talisman. Dowager. Enervating. Sycophantic... (5)

At night, on my pallet in that dark hall at the foot of the stairs, rubbing my feet together for warmth, I am frightened.  I've never been alone like this.  Even at the Children's Aid Society, in my iron bed on the ward, I was surrounded by other girls (97)

As my eyes adjust to the darkness, I can make out the shapes of each object in the room.  Electric lamp. Dresser. Bed frame. My boots.  For the first time since I stepped off the train in Minnesota more than a year ago, I feel safe. (165)

In my nightmares I am alone on a train, heading into the wilderness.  Or in a maze of hay bales.  Or walking the streets of a big city, gazing at lights in every window, seeing the families inside, none of them mine. (202)

Gazing ahead at the dark blue sky striated with clouds, Molly reaches up and touches the charms around her neck. Raven. Bear. Fish.
The turtle on her hip.
She doesn't need much. (214)

My entire life has felt like chance.  Random moments of loss and connection. (235)

I learned long ago that loss is not only probable but inevitable.  I know what it means to lose everything, to let go of one life and find another.  And now I feel, with a strange, deep certainty, that it must be my lot in life to be taught that lesson over and over again. (246)

91 year old Vivien and 16 year old Molly.  Both orphaned and thrashing about to find their places in the world...one in the past and the other in the present.  Their lives connect when Molly comes to Vivien's home to serve out 50 hours of community service she's earned by attempting to steal an old worn-out copy of Jane Eyre from the library.  Molly and Vivien spend those hours in Vivien's attic, sorting through boxes, stories, and memories.

The double narrative format - it's no secret at this point that I like this writing strategy...as long as it's done well.  Doing it well means that the author somehow manages to keep the reader's attention even as she flips from one timeframe to another.  I'm a little biased on the history section and wanted to read as much there as possible, but I was still drawn to the present, Molly and Vivian's relationship, as I was to Vivian's humble beginnings.  I also found it interesting that the author herself mentioned this in the interview at the back of the book.  Baker Kline strategically placed pieces of each timeframe within the other in order to do exactly what I described above...keep the reader involved in both stories by showing him/her the relevance of each piece.

The Irish history and the Penobscot Indian history - Orphan Train is not steeped in history...the reader doesn't get bogged down or spend half her reading time googling (ahem, guilty pleasure), but there's enough here to whet the appetite of someone who is already interested in these areas, periods, and cultures.  The Native American cultures of the North Eastern U.S. is yet another part of U.S. history I somehow missed along the way.

The Ending - I'm thankful for a story that doesn't end all wrapped up nice with a shiny bow on top...how many times does life really end that way after all.  What I do like is the theme threaded through every step of the story all the way to the very end...who we are is made up of a sometimes terrifying, uncontrollable chain of events.

The story of Molly Mollases

Mrs. Byrne, Mr. and Mrs. Grote, Dina and who knows how many other people who taken in foster children  and then treated them poorly.

If you like historical fiction that is a heart tugging narrative as well as a look back in time, you'll want to curl up with Orphan Train on a un-hurried weekend.