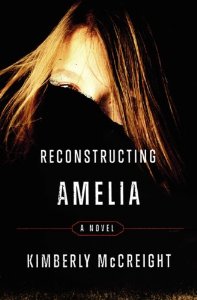 Format? paperback ARC
Source? the publisher via TLC Book Tours
**FTC Disclaimer:  I received a complimentary copy of Reconstructing Amelia from the publisher in exchange for a review.  However, the review below and the opinions therein are my own and offered without bias.

Cover? Amelia, I think...one eye out of a turtle neck sweater she's either putting on or pulling off...Kate only knew a part of her daughter...the other was hidden.

Title? the Amelia Kate thought she knew was her daughter, but Amelia was so much more as well.  Kate has to "reconstruct" the total Amelia in order to put the puzzle of her death back together.

I was reminded of? "Dead Poet's Society"

Why?  Honestly, at first I chose to read Reconstructing Amelia because I thought it was Kate's story, not Amelia's.  As I turned the first few pages and found Amelia's words as well, I was actually a little disappointed and thought I'd made a mistake. I'm bummed with YA right now and just didn't want to read that story...but a few more pages in and I realized first impressions weren't always correct with books

What Now? Reconstructing Amelia made me angry at first, then sad, and then really angry.

Money wasn't the real reason Kate stayed at her job anyway.  She liked her job, and she was good at it, and that made her feel capable and secure. Success - first academic, later professional - had always made her feel that way: safe.  And that was no small matter given that there was no knight in shining armor on the horizon. (13)

Virginia Woolf - suicide committer extraordinaire - was her daughter's favorite author.  The coincidence hadn't been lost on Kate.  But Amelia would have found copying her literary hero in that way to be a pathetic cliche', of that Kate felt sure. (78)

Virginia Woolf was kind of my hero.  Not because she walked into a river with rocks in her pockets - though as far as ways to kill yourself went, that did have a certain style - but because she was crazy talented and had been who she'd wanted to be, despite the world telling her to be someone different. (114)

"Was Amelia depressed or upset about anything?" Lew asked.
"We're teenagers," Sylvia said.  "We're all depressed."
Kate smiled.  It was the kind of thing Amelia would have said. (141)

"You don't need these girls, Amelia," he said quietly.  He looked disappointed.  "Sylvia is right.  It's all bollocks, this rubbish with the clubs." (200)

Sylvia didn't like Woodhouse because he kept threatening her with academic probation.  Woodhouse was kind of a hard ass about academics that way.  Mostly kids either hated him  or wanted to sleep with him.  There wasn't a lot of in between. (230)

"I'm done being patient, Mr. Woodhouse," Kate said calmly.  "You have twenty-four hours to tell me everything about this club Amelia was in, or I will forward your emails to every single Grace Hall parent.  And if that doesn't work, I'll pursue a civil action.  Maybe even a criminal one.  I'm a partner at a very large law firm with substantial resources and I have plenty of time on my hands.  So that's not a threat, Mr. Woodhouse, it's a promise." (253)

"These clubs," Julia said, crossing her arms and shaking her head, "I'm getting on the phone today about this. We pay tens of thousands of dollars to send our children to Grace Hall, and this is what we get: Lord of the Flies?" (359)

Single mom, Kate has worked hard to get where she is...a partner in a high powered law firm, she works day and night.  She receives a phone call at work one day informing her that she needs to come pick up Amelia.  Amelia's been accused of cheating on an English assignment, the very last assignment that Amelia, a successful student, would ever NEED to cheat on.  By the time Kate crosses the city and arrives at Amelia's school, the police inform her that Amelia has committed suicide by jumping from an upper window of the building.
Kate is devastated and goes through the motions of burying her only child.
On her first attempted day back at work, Kate receives a text message that says:

No doubt that the kids in this book are deplorable...but McCreight sheds light on an even bigger problem as far as I'm concerned...some parents.  And, I'm not talking about the single parents who work hard for a living, and may or  may not spend enough time with their children.  I'm talking about the ones who can't seem to grow up, the ones who spend their adult lives acting as if they themselves are still in high school.

I also liked that McCreight chose for Amelia to be a good kid...I think a lot of parents like to sit around on their high horses, congratulating themselves at every opportunity on their ability to raise children who haven't gotten into trouble, all the while almost "nah, nanny boo booing" the parents whose children have made a bad decision or two.
"Well, if so and so hadn't been doing such and such with you know who, then he/she wouldn't have ended up there and wouldn't have been abducted, raped, killed, etc."  "Not that it's his/her fault, of course, but if only..."
I swear it makes me want to scream WTF!!!!!!!!!!!!!!!!!!!!!

Sometimes so and  so is actually completely innocent and STILL gets caught up in the dangerous stuff.  These people obviously haven't spent much time with teenagers these days.
And, Girls?
Girls are MEAN...and I don't mean pull your pigtails mean...I mean throw you to the ground, stomp all over you, leave you there bleeding to death mean and never even think about you after they walk away (figuratively as well as literally in some cases).
Wake up, people.

Kate questioned her parenting almost continuously and I was right there with her.  I think most of us do the very same thing.  Even the parents of children who go on to lead long, successful, fulfilling lives still can reach back in time and find at least a few situations they wish they had done differently.  Kate was a good parent, and I think deep down she really knew it, but she was still willing to throw her self under the bus at every turn if necessary.

Kate's grief - believable, heartbreaking, made my heart beat very fast at times, made me want to pound my fists more than once at the absolute ridiculousness of it all.  I wanted to bust into the school and just start punching people.  Adults, of course...I would never punch a kid...the kids I would take across my lap and whip their butts bc that's what many of them had missed out on more times than not.  And, I'm not actually blaming the kids here...certainly they are responsible...but I've already said it pretty clearly above, the parents, the adults, the teachers, the headmaster, the secretary...all of them need to be punched.  And hard.
I think I'm still a little angry?

Format - alternating perspectives as well as text message format, school gossip blog posts, emails, Facebook status updates and responses for Amelia.  I'm gonna be honest here...this format sucked me in quickly and sucked me in so deep that by pg. 98, I skipped ahead to the end to find out what the heck was going to happen, who was who, who was at fault, you name it...I skipped ahead to find it.  That's how much suspense is provided by McCreight's weaving in and out of Amelia and Kate's story.  I literally couldn't take it...I had to know.  The text messages in particular added a truly ominous feeling to the story.

The references to great literature...particularly Virginia Woolf, both titles, themes as well as quotes.

Jeremy, spineless; Daniel, the snake; Zadie, needs to be locked up; Mrs. Pearl, the "b" word; and Liv, stupid.

Whether your kids attend private or public, city or rural schools, some semblance of the "clubs" system is in power.  And, what probably enables it to survive is the power it gleans from adults placed within the system who also play the game.  There's some language here, nothing like Gone Girl, but appropriate language for this particular setting unfortunately.  If all moms could read this book and realize that even if their little angel would never possibly be caught up in this kind of tangled web, sometimes their actions, judging, attitudes, and ignorance end up perpetuating the tragedy that other people's children have to endure.
And, one child's death is one too many.
We are all responsible.