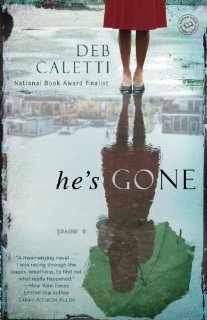 Source? the publisher via TLC Book Tours
**FTC Disclosure: I received a copy of He's Gone in exchange for a review.  However, the review below and the opinions therein are my own and offered without bias.

The Title? pretty direct..he is gone.

Why?  I let my mind and both the cover and title lead me astray on this one...it looked and sounded sinister...a thriller, a hidden life...but that's not what this story is about.

What Now?  I'd like to read something a little happier now.  He's Gone is actually pretty depressing...multiple lives are torn apart on a variety of levels, and nobody wins.  There are no good guys and bad guys here

For the most part, I keep my mouth shut about the butterflies, in spite of my feelings about them.  That kind of silence is what you end up with when you get together the way we did.  At first you're sure that love is larger than any obstacle, but then love comes to feel flimsy measured against what's been lost - family and friends and a history (25).

What if this is nothing more than lust? he asked once.   He asked a version of that question many more times still.  And I would answer.  I would give all the reasons, making an argument.  I fought for it (85).

Dani wakes up one morning and finds her husband Ian gone.  Just gone.  Was he abducted?  In an accident?  Did he just walk away to start over again?  or Return to his first wife Mary?  As the search for Ian intensifies and Dani's anxiety grows, she reviews her life with Ian, their affair, their ambivalence toward their first spouses, their children's lives and how they've been affected, the changes, and finally their ambivalence towards each other.  Was it all worth it?  If they had it to do differently, what would they change and would they still choose each other?

The Nabakov metaphor of the butterfly and transformation.  Not many people know of Nabakov's love of butterflies...I do and was surprised to find this detail tied so deeply into the story.
I think Caletti means for us to see Dani transform, slowly, frustratingly and painfully...if so, she succeeds.

Pollux - Dani's little dog stole the show for me, and his little character and bit parts kept me around when I would have liked to shut the book.

Dani's mom and daughter - both of these characters seemed tougher than Dani...they spoke their own minds...freely and sometimes with very colorful language...but they weren't sorry for it.  Abby (Dani's daughter) loves being in her pajamas...but it's not a big deal.  Who cares?  Very unlike her mother, who over-analyzed everything and gave in too much to everybody.

I liked the real life portrayal of an affair that ends in a marriage that isn't exactly the fairytale the couple thought it would be.  I like the slap in the face of real people who lead others "astray" without the kindest of intentions...and those gullible enough to fall into that net.

Most of the characters - I didn't feel sorry for Ian and Dani...I just didn't.  I think a lot of people fall into affairs the way they did, thinking that life will always be that romantic heady feeling with this new person...who then turns out to be a regular person as well.  To me, that's not rocket science, and I guess it just confuses me that so many people fall into that trap.

Ian - really? There were a lot of early signs Dani should have seen.  But she chose not to.

I think it was a mistake to make Dani's first husband an abuser.  I wonder how women who've actually lived through this situation would feel about Caletti's portrayal of Dani being attracted to the "bad boy."  Is an abuser just a "bad boy"?  I don't think Caletti means to downplay abuse; I just think both the abuse and the affair get muddled because Caletti put them together in the same story.  And, then, even more muddled for me was that Dani took two Vicodin and drank so much the night Ian disappeared that she couldn't remember what happened after they got home.  It was just a train wreck for me...and maybe that's exactly what Caletti had in mind.

The Ending - I'm going to be honest here...I read the ending pretty quickly...before I actually finished the book.  I was trying to convince myself to keep reading :( Dani is a very needy character; she and I would never be friends in real life bc I wouldn't have an ounce of patience with her.  This story tied up way too nicely and neatly with only a few hints buried throughout of what would eventually be discovered.

Ian's daughters and the ridiculous boyfriend accusing Dani...it just seemed a little much to me...any of these little rivers could have made for a riveting thriller leading up to the actual discovery...but all of it together was too much for me.  And if Caletti didn't intend for He's Gone to be a thriller, then there were some "thrilling" bits that could have been downplayed.  I just think it was frustrating for me as a reader.

I hate not liking a book I've asked to read, but I didn't like this one.  I would very much like to read the story of Dani's next chapter, however, the one where her transformation becomes complete...on her own.  Just because I didn't like it, however, doesn't mean that someone else won't.  I'm a huge believer in reader response theories; each reader brings his/her own ideas and transacts with a text.  My personal reader's transaction with He's Gone was just not what I hoped it would be.