In the Garden of Stone by Susan Tekulve - TLC Book Tours 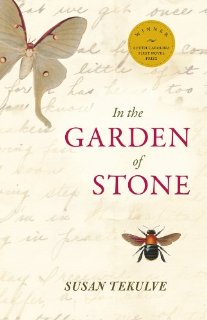 In the Garden of Stone by Susan Tekulve
Hub City Press, Spartanburg, SC 2013

FTC Disclaimer: I received a copy of In the Garden of Stone in exchange for a review.  However, the review below and the opinions therein are my own and offered without bias.

Title? perfect...the garden that Caleb builds is the setting for the beginning as well as the very end.

Cover? ah, the bees...everything from honey to medicinal powers to gardening...a perfect example of using nature and all its powers to cover any and every need...WITHOUT completely using it up.

I was reminded of?
The Painted House by John Grisham
The Shoemaker's Wife by Adrianna Trigiani
The Smokey Mountains
The Dollmaker by Harriette Arnow

Why?  A multi-generational family story that takes place in the South...bring it right on, please.

What Now? I will read anything else Susan Tekulve publishes.  I'm excited about her entrance into the literary world with this astounding first novel and am keeping my fingers crossed that she has more stories like this one to tell.

Her  mother's faded blond hair was unbraided, tangled at the waist of her damp shift.  The joints of her fingers were hot, knobbed, hard as ginger roots in Emma's palms.  She turned her face to the wall, as though ashamed of her ugly hands, her failure to bear the violent tearing aches in her swollen joints and ligaments (16).

He showed her a picture of the Villa d'Este, a garden made entirely of fountains, describing how water dripped down hillside balusters into mossy conchs and the mouths of stone serpents, how streams flowed through tues beneath other fountains to produce organ notes and bird trill.  In one reflection pool, two dragons rose, spraying water that cracked and clapped in the air like the sound of wind (42).

Why speak of such miseria?  You had to look forward.  If the head turns back, the body turns with it (83).

He pulled the man off the tracks, cradling the head in his hands.  As he adjusted the body in the grasses beside the rail bed, he dared not look down at the ruined face.  He looked away, toward the light behind the vanishing point (99).

The horse's gait was sloped and broken, but Sadie held on until the reins blistered her fingers.  When the horse stopped straying, Sadie looked up.  The night was spectral.  Along the path, white pines were moon-bleached, arching like frozen fountains from craggy limestone bluffs.  Dean was different in the woods, less wary than when he was around the house and barn (180).

She heard the screaming of steel against the tracks, the rhythmic rocking of empty coal cars.  The whistle blew again, its sound growing lower and softer as the train moved away until all she heard was mountain air whispering around her (225).

This is marriage, Sadie thought.  A silent house full of unused rooms whose windows were all painted shut (232).

"Can we go for another drive tomorrow?" Hannah asked.
Sadie nodded, "I'd like to find a jar of honey."
Hannah heard her mother's unspoken promise beneath her words. "It won't be much longer until you'll be old enough to leave.  I won't keep you.  I know how much you hate a cage" (266).

He thought of the bear's great, still eyes that reminded him of Sadie's, and how the bear had forgiven his intrusion, walking away instead of attacking.  Dean imagined the bear must have been telling him that he should be alone for a while longer.  I still owe her, he thought, stepping out of the window's soft light and across the shifting gravel.  He got into his truck and drove home (306).

Caleb Sypher takes 16 year old Emma Sypher from coal country in War, West Virginia to
47 acres of Virginia mountain farmland on a ridge above a valley called God's Thumbprint.  They build a home and gardens reminiscent of the ones Caleb saw in Italy when he was there during the war and settle in to create a home and a life for themselves and their son Dean.  But, life is all about what happens while you're making even the best of plans, and their lives are changed forever one day by a tramp named Bambino.  For the next 50+ years, Grandfather and Grandmother Palmisano, Uncle Carlo, Father Edward,
Dean Sypher and his wife Sadie, Sadie's mother Jane Musick, Dean and Sadie's daughter Hannah, Aunt Maria, Dr. Chapel, the vet and Luther and Ruth's lives all meld together to change each other's directions and form a community of people who struggle to move into the future while holding on to the past.
A family story not to be missed.

The vivid descriptions of the mountains, the trees, the wildflowers, the growing gardens, the roads, the houses, the people...I loved Tekulve's rich descriptions from the first paragraph.

The generations...while Tekulve's story covers 3 generations, she writes in such a way that you don't get so attached to the characters just to have them disappear once the next generation begins.  Those characters always stay with the ones they leave behind.  Sadie's character, in particular, is one who through her quiet strength, deeply affects those she loved and those who loved her.  These are real people, living real lives, under real circumstances, making real choices that shaped the communities they lived in and their families.

Sadie - if you make me pick a favorite character, it is Sadie.  Sadie was a strong woman who weathered her life and its hardships along with its joys with her head held high.  She didn't need sarcasm or bitchiness to prove her strength, and she treated others the way she believed everyone deserved to be treated.  Her devotion to Dean's mother was stunning, and I couldn't help but think about the commitments these families made to each other.

The naturalness of life - these generations of people lived off the land because they had to.  Today we live so far off the land it's not even funny.  We have gotten so far away from enjoying and appreciating the bounties of the land around us.  Tekulve reminds us of that without preaching one time.  She doesn't say, "Look at the mountains in all their glory." She paints us a picture.  She doesn't talk about the tomato plants as red fruit growing on a vine in our little convenient garden beds.  She paints a picture of people working alongside each other, depending on their crop and making anything and everything out of those tomatoes in order to use what's been harvested...without wasting one single drop.  And, of course, there are the children, who grow so tired of eating tomato sandwiches, tomato biscuits, homemade catchup, stewed tomatoes and the like that they throw tomatoes across the fence when nobody's looking.  In today's society, whatever we want or need, whether it's a food product or building materials, we just go on down to the store and buy whatever we need and many times thing we don't need.  I think there's a lot to these old stories worth remembering.

Strong female characters - the men worked for the railroad or in the coal mines.  They were there, but they weren't really.  The women ran the homes, raised the children, cooked the meals, sewed the clothes, and taught the lessons.  Many times the fathers were only present on Sunday afternoons.  Children learned to be strong very early...young girls had to step in for their mamas when they gave birth, were sick or if their mamas died.  Survival was something Tekulve's female characters learned very early on in their lives.

I loved that Tekulve wrote some of the novel from stories that her mother-in-law told her.  Why invent new, bold and beautiful stories when we have such culturally rich, in-depth characters and the events of their lives that shape them and generations to pull from??  Can you tell I loved this book??

Dean was the only character I wanted to slap around from time to time...he realized just what a partner, wife and woman he had in Sadie after she was gone.  Time wasted is always a shame.

In the Garden of Stone is a keeper for me...it will hold a special place in the antique secretary with the other keepers.  If you like real life, hard times, pulling themselves up by their bootstraps kind of stories, then this is your next read. 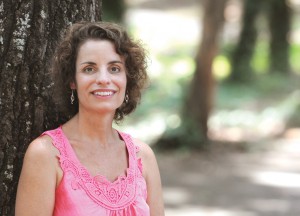 Wednesday, May 29th: Rhapsody in Books

Thursday, May 30th: The Relentless Reader