Giveaway and TLC Book Review - The Returned by Jason Mott 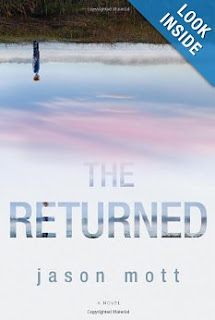 The Returned by Jason Mott
Harlequin, 2013

Format? paperback
Source? the publisher via TLC Book Tours
**FTC Disclosure - the publisher provided me a complimentary copy of The Returned in exchange for an honest review.  The review below and the opinions therein are my own and offered without bias.

Why?
Small town Arcadia.  A writer from North Carolina who's a poet and a first novel that's already been picked up by Brad Pitt's production company?  Yes, please.

What Now?
The publisher is generously offering one reader in the U.S. or Canada an opportunity to win a copy of The Returned.  Just leave your name, blog address, and email in the Comments section.  (no P.O. Boxes).

Dear Mr. Robert Peters
The International Bureau of the Returned would like to inform you that you are being actively sought after by one of the Returned by the name of Elizabeth Pinch. (65)

He removed the photograph from the sticky film. It smelled of old glue and mildew.  That night, for the first time since her death, he wept. (122)

"What the reverend means to say," the scientist began, adjusting his tie as he spoke, "is that these events are beyond the realm of religion..."This is a scientific matter now." (188-189)

"Our top story today coming out of Romania, where the government has ruled that the Returned are not inherently afforded civil rights, declaring that they are simply 'unique' and therefore not subject to the same protections as others." (227)

The detention center of Meridian, Mississippi, allowed some mingling between the True Living and the Returned. (259).

"You just saw a chance to do something you always wanted to do, and you did it.  You always been a hothead, and with the world the way it is now, you finally get to be the hothead you've always wanted to be." (308)

All over the world the dead are returning to life...in their same bodies and looking exactly the same as they did before they died. There is no explanation, no history, no plan, nothing.  The government steps in to control the situation that very quickly is becoming out of control.  Who are the Returned?  Are they the same family members who've been long gone? Or, are they something else?  How long will they stay? And, what will they do when they go?
Will the world accept them?
Or not?

Harold and Lucille - they were very real to me, this couple who truly loves each other, complete with constant bickering and their very traditional relationship.

the intermittant stories of the Returned around the world

Science vs religion
Religion vs science
But, nobody wins.

While The Returned sounds as if it's some other world story of the paranormal, it's not.  The Returned is so much more.  It's a story of love, and people, and what we do to each other, how some lessons are never completely learned, and how we don't always get a second chance to make things right. And, even more importantly, I thought, The Returned is about how those 2nd chances we can have are not always what they're cracked up to be.
A deeply touching novel.