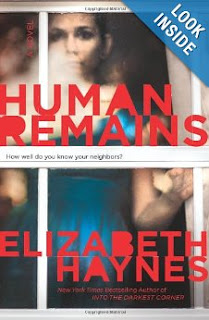 **FTC Disclosure - The publisher provided me with a complimentary copy of Human Remains in exchange for an honest review.  However, the review below and the opinions therein are my own and offered without bias.

I was reminded of? Psycho - Norman Bates, Silence of the Lambs, Ted Bundy

Why?  Into the Darkest Corner was and still is one of the best psychological thrillers I've ever read.  I didn't enjoy Dark Tide as much, but I was anxious to see what Haynes would do with Human Remains.

What Now? Bring on the next Elizabeth Haynes.

After I'd found the body, I went back home and shut the door.  Then I'd opened the door again and thrown the cat out and shut the door behind her.  In putting my hand under her belly I had felt - instead of soft fur - cold, wet, slimy muck all over her. (29)

"I've been doing some research on unexplained deaths where the deceased has remained undiscovered for some time.  It seems that the number of these cases so far this year is unusually high.  I've done a chart..." (61)

You never realize what loneliness is until it creeps up on you - like a disease, it is, something that happens to you gradually. (76)

"I have something important to say. There are more bodies," she said, as though she were announcing the arrival of a train on platform seven.  "There is one at-" (143).

Remember too that it is not too late to check up on your neighbors! (228)

The newspaper is their best weapon. Which means they haven't found my notebooks or the images.  If they don't find those, they have nothing at all. (361)

Annabel and her cat Lucy discover a dead body.  A dead body that's been dead for quite some time.  Annabel, a crime analyst, discovers that there have been entirely too many people in Briarwood dying and remaining undiscovered...for months...even a year.  No foul play is suspected...but should there be?

This is a page turner that will turn your stomach at the same time.

The window into each body...these windows gave the victims names and made the story that much sadder.  Not only is there a sicko afoot, but these are very real people who find themselves his victims.

Colin - after every Colin chapter I felt like I needed a shower...seriously.

If you like getting jerked around by a book...and then being somewhat disturbed when you finish it, go ahead and dive right in :)