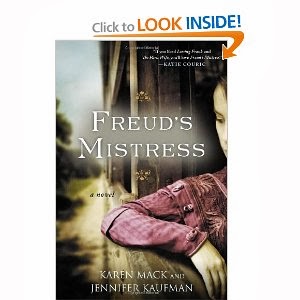 Title? pretty straightforward...it is what it is...except that Minna was more of a 2nd wife than a traditional "mistress"

Cover? Minna was a pensive woman...a deep thinker and traveled a great deal.  Loved this cover.

What Now? The publisher is generously offering one copy of Freud's Mistress to a reader in the U.S. or Canada.  Just leave your name, your blog URL and an email where I can contact you in the Comments section if you're interested.

She never thought it would come to this, but now here she was, at her sister's mercy, asking for help. (1)

Minna dear, sit next to Sigmund," Martha said, motioning to two empty chairs at the far end of the table. (29)

"It's so nice to have someone to talk to..." he said, looking at her intently, "someone who understands. My colleagues think I'm off on a quixotic mission.  And so does Martha." (60)

She was such a fool.  Why had she taken the time to pore over his report, to delve into his world of demented humans with horrifying dreams, to force herself to understand the meaning of sexual neurosis and hysteria and phallic symbols, like flagpoles and trees hovering everywhere, when he obviously didn't have the slightest inclination to listen to a word she had to say? (153)

She tried to read something, anything to divert her attention, when she heard someone knocking on the door.  She put on her dressing gown and opened the door a crack.  Sigmund was standing there in his dark woollen overcoat, soaked and dripping. (169)

"Perhaps you're tired because you've been visiting Sigmund in his study until all hours, although it's good Sigi has someone to talk to..."
There was a pause as the two sisters looked at each other. (275)

But the fact was, if she was to continue this duplicitous arrangement, she was just going to have to swallow her resentment, her pride, and learn to live with the fact that Martha was, and always would be, the wife. (284)

"Now, now, dear. It's normal to be nervous," she said, as she began to remove some instruments from a velvet-lined oak case that reminded Minna of a tiny coffin.  The steel-plated, ebony-handled instruments were easily recognizable: a scalpel, a blunt hook, a pair of forceps, and needles of varying sizes.  Also, a spool of silk sutures to repair lacerations and an instrument that looked like a long steel crochet needle.
"Just relax.  When you wake up, your little problem will all be gone." (331)

Martha slid the letters into her pocket and left her sister's room. It was her firm belief that there are some things in this life that should remain hidden.  She would do anything to protect her husband's reputation.  And she knew her sister would do the same. (351)

Minna Bernays finds herself and unemployed and unmarried young woman in her late twenties.  Her only option left is to go to her sister's home and help with her sister's husband Sigmund Freud and their 6 children.  Minna's intellect and her lack of traditional women's attitudes and behaviors have ostracized her from many options for marriage and a family.  But, those same characteristics are exactly what makes her so desirable to her brother-in-law, Sigmund.  Their connection is intense, and their love affair inevitable.  How the affair affects her relationship with her sister Martha, their children, and the rest of their lives is not so smooth, however, and the ways they adjust to the arrangement is very surprising to say the least.

References to literature, psychological theories, philosophical thinking, academia, history, Jewish culture, drug use, women's health issues, and the differences between medical care available to "women of substance" as opposed to the lower classes.

Martha and Minna - I expected to dislike one or the other...but I didn't.  Honestly, I admired them both.  At first Martha grated on my nerves as the long suffering and ignored wife who was slowly slipping away into a laudanum addiction.  Then, later, when Minna became dissatisfied that the romance of hers and Sigmund's relationship seemed strained, she was the one I wanted to slap.

Sigmund Freud - now, this character is a tricky one...arrogant, uncaring at times and even mean, self-absorbed, and impatient, he never seems to pretend he is something or someone that he is not.  Even when Minna or Martha call him on his behavior, he never tries to explain it away, never tries to hide, doesn't lie about his needs, etc.  He never mentions, nor does he ever pretend that he would even contemplate leaving his wife, but he also doesn't pretend to his wife that he is faithful.  Very interesting to say the least.  To spend 40 years within the same household, raise the same children, and die respected by all, there must have been a respected truce of some magnitude between them all.

The little tidbits about the children, especially Anna, who is the only one of Freud's children who carried on in his footsteps.

The Victorian household, especially the vast differences, as I mentioned above, between the households of the wealthy and those of the poor.

I wanted more...once Minna returns to Martha and Sigmund's household and stays for 40 years, I wanted so badly to know how they lived that life.  I do realize realistically that we just simply don't know a lot about that time in their lives.  Did Minna and Martha ever have the conversation?  Or, did they just dance around each other for 40 years?

If you are the least bit interested in Freud, his theories and the historical aspects of a genius at work and at home and as a Jew, you'll love this book.  I certainly did. 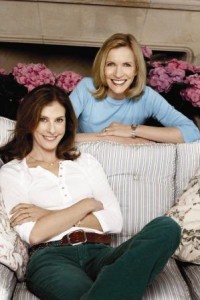