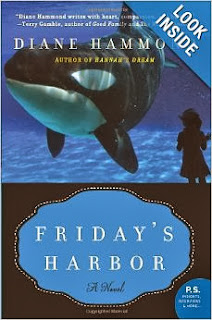 Format? paperback, 325 pgs.
Source? the publisher via TLC Book Tours
***FTC Disclosure - I received a complimentary copy of Friday's Harbor from the publisher in exchange for an honest review.  The review below and the opinions therein are my own and offered without bias.

Why?  Whale rescue? The power of animal/human connection?  Do you really have to ask?

What Now? First thing I'm going to do is watch "Free Willy"...can you believe I've never seen it??  I'm also going to watch the CNN documentary "Blackfish" all in one sitting.  So far, I've only caught snippets.  Then, I want to read Death at Sea World.
After I've gotten enough killer whale info to satisfy me for a while, I'll switch over and read the pre-cursor to Friday's Harbor, Hannah's Dream.

"Is she right?  Is he lazy?"
"He's in an advanced state of starvation."
"Don't they realize?"
"No.  In all fairness, they've never worked with a healthy killer whale, so they don't have anything to compare him with." (31)

And in the absolute quiet of the moment Truman felt a sudden, nearly overwhelming sadness: that there were orphans in the world, tha thtere were those who deserved better than they got, that isolation could be so profound. This alien creature without hands or ears or facial muscles amplified a hundredfold the incredible hubris of enforced captivity.  Maybe in their misguided kindness they had made an appalling mistake. (39)

"For one thing, animal psychics are frauds - there's no such thing. For another thing, Friday would be dead inside a week if he were released back to the wild.  He's used to being hand-fed dead fish, not having to figure out where the schools of fish are today and tomorrow.  He's immune suppressed, so he'd pick up the first infection he came across.  And the North Atlantic is a big, big place - the odds of him finding his pod, or of them finding him, are remote.  Reality bites." (98)

Friday was the most easygoing killer whale Gabriel had ever worked with.  Still, he did have a temper, which he lost early one morning during his first weeks at the zoo over a handful of squid he was offered for the first time.  While Gabriel and Neva watched, he spit out the squid and then swam around the perimeter of the pool slapping his tail flukes on the water in outrage. (128)

He swam past the old woman but then stopped and circled back until he was only inches away from her.  They regarded one another, the whale and the woman; their eyes locked and held.  Tears ran down her thin cheeks in the chilly air of the gallery. (132)

The evening news was being written at that very moment, based on crazy conclusions invented by people lacking even an iota of factual information, and there was no time to set them all straight. (239)

He sang, whistled, clicked, and trilled at the calf in a long and constant song.  And the calf sang back. (315)

Truman Levy, new director of the Max L. Biedelman Zoo, in Bladenham, Washington takes on an aging killer whale who is slowly dying in his current home in Bogata.  With the help of professional keeper and trainer Gabriel Jump, Truman and his staff, along with his benefactor aunt, Ivy Levy, learn the ropes of killer whale care.  They also end up having to fight political activist groups who think they know what's best for Friday.   At the center of it all is Friday, the incredibly intelligent, miraculous mammal, through whom they all learn more about themselves as well as the animal himself.

Ivy Levy - all my life I've dreamed of being Ivy Levy, with so much money that I could build a huge home with lots of land and homes, vet care, food, toys, etc. for all the animals in the world who didn't have a home.  In a perfect world, right?

Gabriel - the collector and then rescuer.  Truth and reality are his focus...whether or not everyone around him likes it or not.  He's an expert and allowed to do his job.  His knowledge is endless, but when he is stumped he doesn't hesitate to call on other expert friends for collaboration.  I've seen the portion of "Blackfish" where the whale calfs are caught, but I've also seen the fisherman's remorse after the task is complete.  Unlike Ivy, I think I could work something out where Gabriel is concerned.

All the ins, outs, and all abouts, of killer whale behavior, training, characteristics, personality, and vet medicine.  So interesting!!  Several times I teared up at the sheer wonder of this creature.

Truman Levy - I could be Truman...I really could.  I'm not a lawyer, and I don't have a rich aunt, but I do sometimes get confused about the politics that are going on around me.  I say the wrong thing sometimes in defense of what I believe, and I sure as heck make mistakes.  I try very hard to surround myself with good people..and I let them do their jobs.  Now, if I could only find a rich aunt :p

Libertine - oh to have a life where you feel what animals feel.  Selfishly, I wouldn't want it because how else could you live your life if you did?  Libertine endured a lot for Friday's sake, physically, mentally, financially, and every other way you can think of.  She also somehow psychoanalyzed Julio Iglesias, and that, in itself, was a miracle.

I'm already traumatized by the idea of animals in captivity.  So, the entire notion of this book traumatized me from the beginning...True, Friday was being rescued, but he was being taken from one bowl of water to another.  I do not, however, subscribe to the "death is better than captivity" camp's theory.

Julio Iglesias - the Chihuahua...I'm an animal lover.  But, even I draw the line with an animal that poos and pees in my house.  Especially one who's doing it out of spite.  Ivy kept him a lot longer than I would have.  He did make me laugh from time to time though...I could just see his haughty expressions and him marching around as if he owned the place.

What some groups are willing to do in the name of "death is better than captivity" makes just about as much sense as bombing abortion clinics to save lives.  Really?

If you're an animal lover, don't miss this one.  If you care anything about the political discussions behind conservation and capture, you need to read this book.  You may find that you're not as one sided as you thought.  In Friday's Harbor, Hammond doesn't try to change your mind; she just presents a complete story for you to consider. 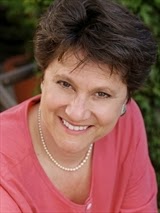