The Death of Bees by Lisa O'Donnell - TLC Book Review 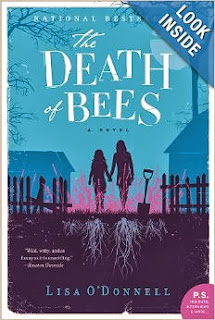 The Death of Bees by Lisa O'Donnell
HarperCollins 2013

Format? hardback
Source? the publisher via TLC Book Tours
**FTC Disclaimer - The publisher provided me a complimentary copy of The Death of Bees in exchange for an honest review.  The review below and the opinions therein are my own and offered without bias.

Why? I love a gothic tale...and this sounded like it fit the bill.

I was reminded of? The Walking Dead, We Always Lived in a Castle, CSI, A Series of Unfortunate Events

What Now?  I'm relieved...and I will be the first to grab the next book O'Donnell writes.  The Death of Bees is going in my glass shelves.

We're on our own now.  Izzy and Gene are dead and no one can know what we've done with them.  (9)

He burst at the seams, body fluid everywhere, on the carpet, on the walls, a swamp of poison.
"You beastly, beastly man," says Nelly (15)

They will misunderstand entirely because they want to, but if anyone should ask, ask if I'm okay, I'll tell them.  I'll say, "No, I'm not okay, my lover is dead.  His name was Joseph and today would have been our ruby anniversary." (39)

Even though I have straight As, the smell of tobacco on my breath and an obvious lack of innocence gives them permission to shake their heads in dismay, as if disappointment and failure is a destiny I can't avoid. (52)

Lennie's starting to suspect something and so is his stupid dog.  He's always sniffing about the flower beds.  I caught him the other day frantically flinging dirt between his paws, he actually pulled up Gene's arm, just like that, and I totally shat myself. (85)

Sounds brutal I know, but what do you want, with my background I should be a serial killer.  Count your blessings (133)

He says with good grades anything is possible, but with my attitude Vlado reckons opportunity might be snatched from me.
"Everything must shift in here, or life will eat you up," he says and thumps his heart. (210)

There is no moment in which we say good-bye, there is no finality as he slips into peacefulness, he simply leaves us, and though I seek courage when he passes I am weakened by tears, but I must hide them for he leaves us a lie to conceal, a lie he sent to save us. (268)

Marnie, 15, and Nelly, 12, bury their abusive mother and father in the garden.  Keeping their secret turns out to be more complicated than they ever imagined.

Marnie - it took me a little longer to like Marnie...I didn't dislike her; she just kept shocking me.  I kept waiting for her train to crash.  She kept jumping out right before or right after impact, and that started to impress me.  She's a survivor, this one.

Lennie - I was wary of Lennie at first as well...a perfect example of the real person deep inside what the outside world thinks it knows.

Vlado - ditto what I said about Lennie

The ending - in theory I wouldn't like an ending like this.  I can't realy explain myself without spoilers, so I won't.  But fairy tales are nice sometimes.

The Death of Bees is one of those books that makes you wince in the first couple of pages.
For a lot of reasons.
Several of those wincing moments have to deal with the F word.  And, I don't mean fruit.
I lost count of how many times it was used...and mostly uttered by children.
This alone would make me limit who I would recommend this book to.

Omgoodness, the comma splices...on purpose of course, for effect.
But, I'm an English teacher in full essay grading mode, and it was hard to get over.  By the end, however, I was so caught up in the story that I barely noticed anymore.

Heavy, heavy sadness.  These two children, living among filth, abuse, violence, addiction, promiscuity...you name it; they live with it.

Robert T. Macdonald - as if Nelly and Marnie hadn't had to deal with enough...when he entered the story, I really began to see parallels to A Series of Unfortunate Events.

If you don't mind a little gore and some hefty language, and you love a darker gothic novel of survival of innocents, The Death of Bees should be your next read...especially during the Fall/Halloween season.